On the 23rd July we celebrated a year of Samhain. It marked a year since I adopted Samhain, I really can't believe he has made it with the amount of mischief he likes to cause but it has been such a wonderful worthwhile year I wanted to share some little bits of information.

After briefly looking after the lovely but poorly, elderly cat The Beast for 6 months starting 13th December 2013, I knew I wanted to continue to adopt. It was hard at first but when I realised how difficult it is to rehome black cats I knew I wanted to continue and make it almost a tradition that I adopt black cats. I also knew I wanted an older cat, I knew with each death I'd be heartbroken but I also realised I would feel even more heartbroken thinking about all those poor, elderly cats that nobody is interested in taking in simply because there time with them would be shorter.

I found Samhain around two weeks after The Beast passed away, I wasn't ready to start looking but I couldn't resist looking at my local RSPCA site and then I saw this photo. 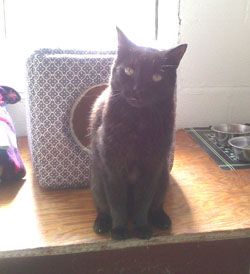 I thought he looked a bit helpless, unsure, shy but inquisitive, I was right about the last part. He does that little head tilt each time he is trying to work something out. I knew that Samhain (then Sam) was the boy for me and within 6 days all the paperwork and checks had been done and he was now in his forever home.

I love my little Samhain to bits, he can be a handful but that makes him more special. He came to us with some missing teeth and has managed to lose another half fighting.

The love he gives my home is amazing. I love how bold he is, going from my room to my parents room in the night, plonking himself wherever he likes. Although Samhain has been done he still has the urge to hump and my clothing ends up getting the short straw. My neatly folded piles become unfolded, dragged around and crumpled. I don't mind, I just want him to be happy.

I love Samhain's quirks. One thing I taught him was to tap/high five my hand for a treat. He picked that up so quickly and now uses it against me. If he wants attention, say if I'm trying to get changed, he taps me, if I'm cooking he taps me, if I'm sleeping he taps me! I find this adorable, I love it when he demands attention first thing in the morning.

Another "defect" Samhain came with is a bust nose so I'm wary of him having problem breathing. Nothing to worry about so far but he does snore, grunt and huff when he isn't happy as well as the odd grumbling meow.

I love Samhain so much, now his age was estimated to be around 10 but we really don't know, he can get himself into trouble so I do worry about him, it's still worth it. In general he is very happy, he has a home to roam around and a large garden to go out in - he can do what he likes when he likes. Whatever happens I know each day I make him happy and he makes me happy, that's all that matters. 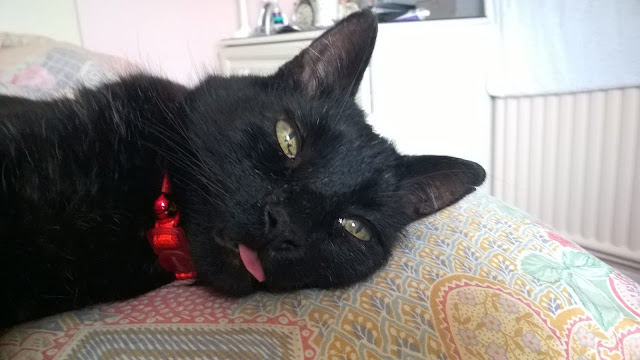 So Happy Anniversary Samhain, here's to another year (hopefully!)
Posted by Unknown at 12:00