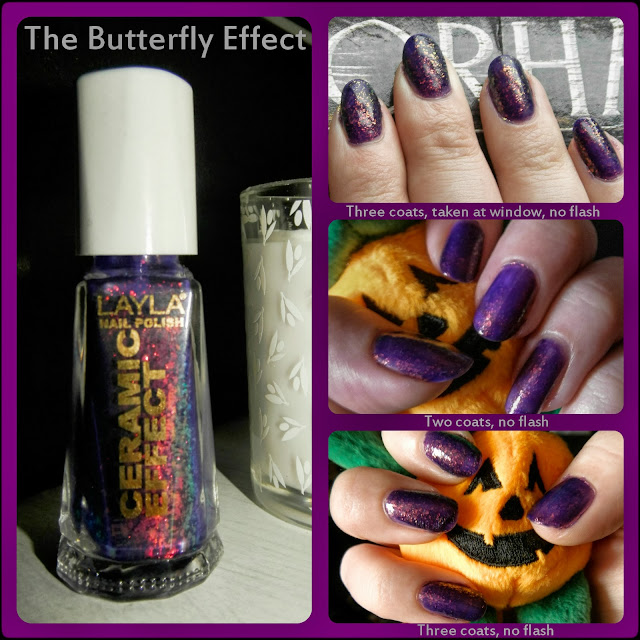 This could be considered a week of Layla nail polish reviews the way I'm going. I actually thought this particular one would be a step away from the darker, autumnal, spooky colours but I now think of this as a full on Halloween shade. I love this time of the year, although I don't just bring the horror out in October, I spend the year cramming viewings of old horror, collecting obscure dvds and blu-ray's, it is my main hobby, I just ramp it up a notch. In a way I wish there wasn't as much Halloween stuff in the shops as I just can't afford to buy it all. As I said, this nail varnish was supposed to be a step in a different direction, but applied it screams Halloween and although I saw it as more of a mermaid/fish scales glitter when I ordered I'm happy with the effect.

I love the Layla effect nail polishes, there are so many different ones to choose from and can be picked up for a reasonable price via Amazon. With this particular polish you can easily build the intensity, two coats are really needed but three looks better. It dries amazingly quickly for something with such a heavy effect. The glitter shimmers from orange to green in the light on top of the amazing purple polish, truly perfect for Halloween. An added bonus is that for a glitter effect nail polish it is rather easy to remove without spreading glitter all over your hands.
Posted by Unknown at 18:12