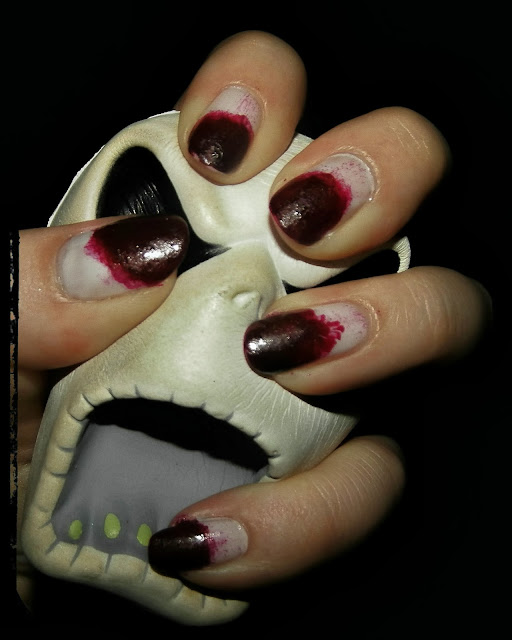 Halloween is not far away and for some of us (myself) it lives with us all year round. The plan last night was not to make my finger nails look like I'd been trying to claw my way out of a well but sometimes these things just happen.

Okay they aren't realistic blood red, but a bright dark red is much more fun that a dark brown red - I carried around my own blood in a bag for a few days this summer whilst in hospital, it wasn't a colour I'd be seen dead in. 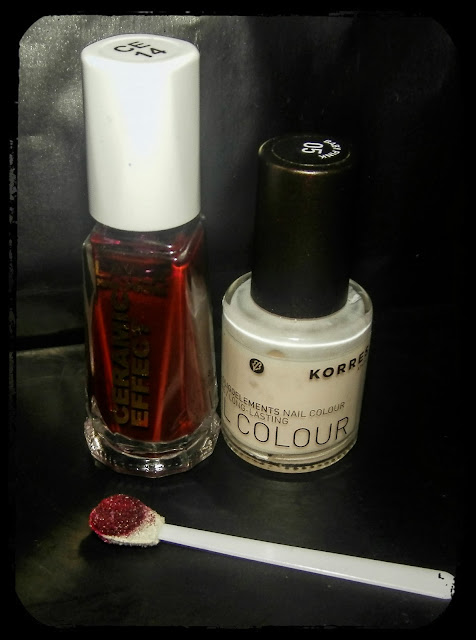 For starters I applied a couple of coats of Korres nail colour in baby pink, a really nice white with a hint of pink which helps make the rest of the effect stand out. Next I made good use of the very recently bought but heavily used Layla Ceramic Effect in 14 Vamp Red, I like to use an eyeshadow applicator when attempting to do a fancy nail look, cheap and simple, I start by dribbling some of the polish onto the applicator I then dab this all over the nail starting at the tip so that the polish spreads over the applicator, I'll be tidying the tips in a bit anyway, I only dab it around two thirds of the way up, as it is supposed to be blood splattered it should look more random than precise. After this first coat I leave it to dry before using the actual brush to add two coats of polish but not covering the effect near the base of the nail. Left like this the whole effect would look too glossy and slick but only applying it with the applicator makes it hard to get a dark colour so using the brush is necessary - to get the sticky, scruffy splattered look I waited until the polish was nearly dry but still slightly tacky then I use the same applicator to make it messy again and adding a few extra splatters before leaving it to dry fully. So a simple, easy Halloween look.
Posted by Unknown at 11:43