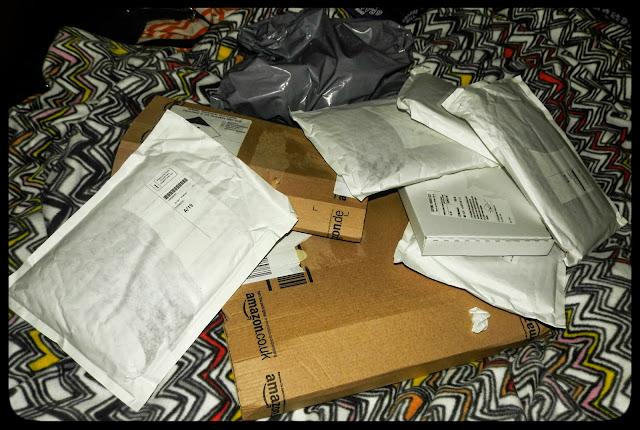 I really haven't heavily added much to my collections recently, this might seem surprising as I have had quite a few bits but nothing like I used to order. Zavvi bargains along with a few bits from Amazon have seen me dipping into what is left of my savings and all but one have arrived today, like an amazing birthday bundle, I had a very giddy morning!

Quite a few updates to my BFI collection. I'm nearly up to date with the BFI Flipside releases, I have up to and including 24. Duffer/The Moon Over The Alley, Little Malcolm and His Struggle Against the Eunuchs, and Requiem For A Village plug in the gaps. Then a few more BFI releases A Day in the Life: Four Portraits of Post War Britain - I really had to purchase this having viewed it twice already, The Belly of an Architect, Red Desert, Requiem for a Village - those last three were pretty much blind buys, Saturday Night and Sunday Morning - perfect, miserable kitchen sink drama - about time I upgraded my copy to blu. Finally the stunning Grand Hotel steelbook, I've loved the Warner steelbooks and although I'm not planning to pick up all the steelbooks they're released I've been wanting this since it was released, very happy to finally have it.

Right, you see how the strategy guide is still wrapped in its plastic packaging? Well that is how it will stay at least until I've completed the game. I love picking up the strategy guide, I seem them as a souvenir, the equivalent of a guide book in the museum - I don't even use them on the way round unless necessary. As this is considered limited I thought I'd pick it up on released, of course some releases are more limited than others but I wanted to play it safe.

I read a lot of psychology books, I also like to read about psychos so a perfect mix. It also seems rather sensationalist which is even better.

More Layla nails and more on the way! I've only just started to use this brand but I love their range. I  can't wait to try the velvet effect or the green glitter.

Finally a cuddly toy, another Bagpuss, I've been wearing out the microwavable one so I was looking for a big cuddly one when I came across this little musical, snoring Bagpuss.

Finally an order from the other week. I won a £50 voucher courtesy of the Prize Finder website which I'm sure I held onto for more than a month before ordering this lot.

So no more purchases for a while although next month should see plenty of pre-orders coming through, I just need to make some room on my new shelves.