I'm a big kid, there has not been a time in my life when I haven't owned childish items. I was spoiled rotten as a child but I didn't have many toys that were considered boyish, I sometimes wonder if that is the reason I've never grown out of toys. There are items I didn't have that I'm still dying to play with.

I had so many Tomy toys when I was younger, my big collection was Sylvanian Families, I just adored them - now I adore playing Animal Crossing, I still play make believe with cute animals. I loved the hand-held pocketeer games, the water games and the one thing I didn't have but coveted the most was the Turnin' Turbo Dashboard. In recent years I've found myself trying to purchase toys I once had or find the ones I always wanted but missed out on.

Vintage Tomy toys are remarkably costly to pick up. My collection is quite limited as I don't have as much spare cash to spend on this area as I'd like. I've picked up a few items from Ebay but I always feel like I'm cheating buying stuff on there, it isn't the same as finding an item at a car boot sale or charity shop. I still buy the odd thing on Ebay if it isn't too expensive. Having a collection but buying everything on Ebay is like wearing a band tour t-shirt without having seen the band in question. You would always feel a bit empty, so I tend to stick to bargains and rarities when it comes to Ebay.

I still have a load of my toys in the loft above my living room. I always found it hard to let go of things so I kept as much as I could. I can't remember what is up in the loft so I really need to check it out as I'm hoping to have some of my Tomy pocketeers left. To buy them again on ebay isn't cheap. You are looking to spend around £5 per item, there are some sellers that put items on at a decent price, you just can't get the bargain on Ebay like you used to. 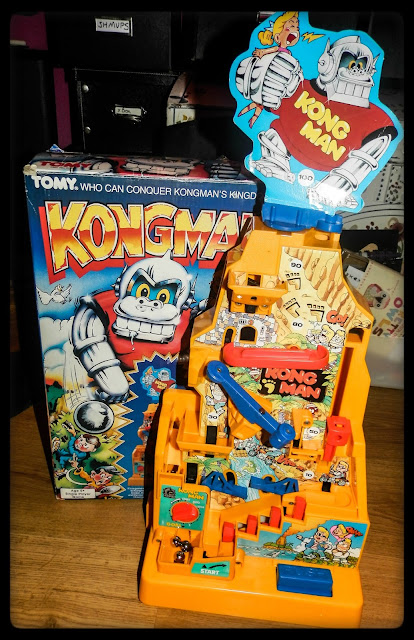 The first thing I picked up years ago was Kongman from a charity shop, actually while I volunteered in the shop in question, I'd played it as a kid but never had it and desperately wanted it. It works and is played with regularly, I don't just keep these items in a glass cabinet, all of them have been played with before and I'm going to play with them along with allowing my cousins to play with them also. Now I can't remember if I bought AAAAGHH! again or if I found that years ago in the attic but it was one I had when I was younger and I still actually love to play it. 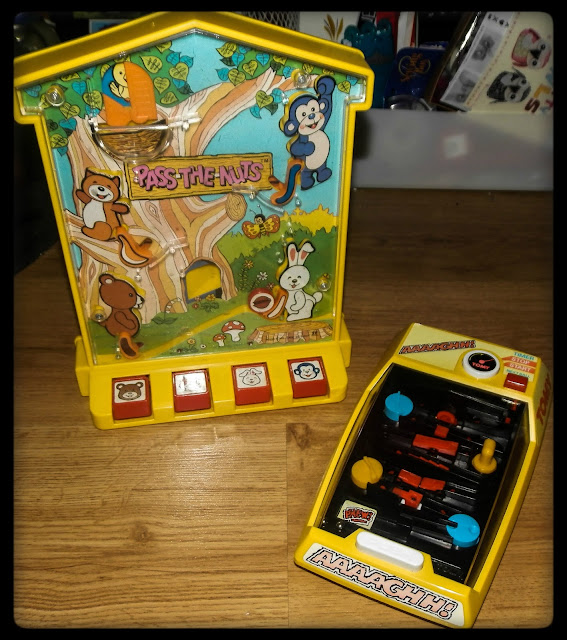 All the other items are recent Ebay buys, I haven't been able to get out and have missed the buzz of finding things in charity shops so I treated myself to a few reasonably priced items.

Pass the Nuts I actually remember buying it originally from a car boot sale when I was younger, it was suggested to me on Ebay and I couldn't resist, it brought back so many memories. Once it arrived I displayed it on top of a wardrobe, my Mum saw it and asked when we had brought that down, now I'm worried that I do still have that in the loft. Two copies will always be better than none though.

The Tomy Tower Teaser was one I had when I was younger so yet another nostalgia buy, I think I kept mine in better condition but it was cheap. Now with the Tomy Starcades, the Rocket Tower I had when I was younger but the other two, Mini Mouth and Rescue Copter I didn't, so I was pleased when I bought the three of them for about £5 for the lot, really a bargain for these. 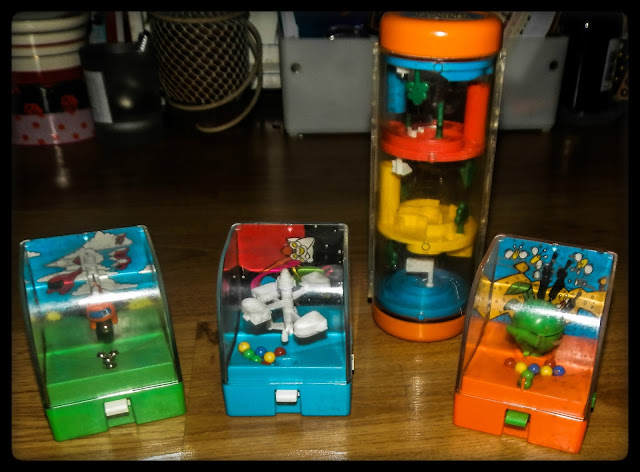 If I had more money I would fill in some of my nostalgia/Tomy gaps. The exhilaration of finding the items for cheap in a car boot sale or charity shop always beats the feeling of winning an item on Ebay so I can't wait to get back to hunting. I'd love some of the water games again but the dream buy would have to be a working Turnin' Turbo Dashboard, I was desperate for that as a child, I never even got to play one one, even if I was disappointed when I played it I would be over the moon to just to own it but with working copies on Ebay rare and expensive it won't be happening any time soon.
Posted by Unknown at 18:00