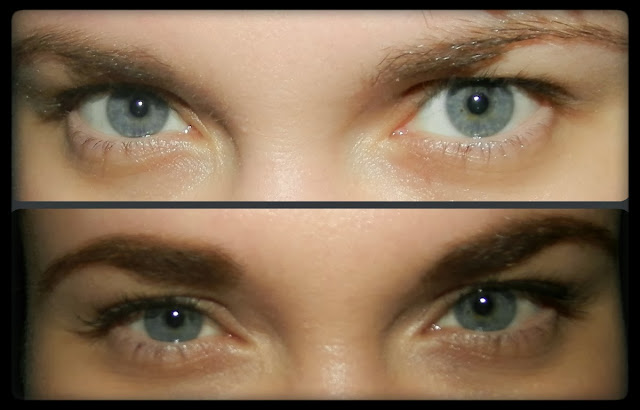 I'm the sort of person that wants eyebrows a certain way but doesn't make the effort to do anything about them. Earlier this year I was dreaming of having eyebrows like the late Gene Tierney, I didn't want a big transformation I just wanted them to be fuller and for them to be thicker, I wanted them to not start to go thinner until halfway down the brow. I tried growing them out and being stuck at home really made it the best time to do this After months of growing them out all I managed was a few stray growths but nothing I could work on. So I gave up. The thought of drawing on my eyebrows fills me with dread, I've used a pencil to fill in bits but I'm always so aware of it.

Last week everything changed, browsing the Illamasqua counter the young lady working there offered to do something with my eyebrows and I went with it. My mum was pulling some funny faces so I was really worried but when I saw what she had done I was in love (with the eyebrows, not her), I had clumsily tried to explain who Gene Tierney was and what her eyebrows looked like I really tried to explain as best I could but I sometimes don't even understand what I mean. I was lucky as the girl knew just what I needed and what I wanted, my eyebrows looked beautiful, glamorous. I got old Hollywood glamour I always feared I'd just end up looking like Bert from Sesame Street. It made me realise how well-shaped, drawn on eyebrows can really make or break a look. They make every other feature look better brighter, they complimented my mascara, they made my look complete. So I was sold, I picked up the Illamasqua Eye Brow Cake in Thunder there and then.

I was very aware that just because the lovely girl on the counter could work wonders I might fail miserably, I didn't buy the same brush she used as I'd recently bought a 24 piece brush set and couldn't remember whether I had something similar - luckily I do. I do need practice, I need to know what shape I want, work out where I'm uneven, work on my brush skills but I'll get there. The Illamasqua eye brow cake seems to be magical, I always thought anything other than filling in gaps over the eyebrow would look too fake but it doesn't look that fake and I have gone to the extreme in the first photo, I've layered it on, added to below my brow and it still doesn't look too bad. I would usually try and match the intensity of my eyebrows with the intensity of the rest of my make-up, I rarely have the occasion to wear extreme looks so my eyebrows won't usually look as dark as shown in the first photo.

The eye brow cake can be used dry or with a bit of water for a more defined look. Even the most amateur (myself) can create fabulous eyebrows, it also lasts. I've used a clear mascara to fix it and they used a sealing gel in store. The Illamasqua counter was pretty much my first shop and after 6 hours of sweaty shopping  (I wore a knitted jumper to go shopping, which shows I'm out of real life shopping practice) my eyebrows hadn't bled or smudged.

The one thing I would suggest everyone thinking of buying it should do is go to the counter and make sure you get the right shade. I would have foolishly gone for something darker, then I really would have ended up looking like Bert.
Posted by Unknown at 13:04