Health & Fitness Update and Why I Hate BMI

I've decided to be less methodical with my postings and focus more on my emotions along with my triumphs.

It's been a funny week or two, my emotions have been controlling me a little more than I'd like when it comes to what I eat which has led me to want to be more open. I have been busy this summer but I've also been somewhat heartbroken. I was dating someone and we split at the end of July, we hadn't been dating long but it was intense and I had strong feelings for him but circumstances got in the way and he ended it. I like to think of myself as being quite level-headed but maybe I approached the break-up in too much of a straight-forward manner. I focused on why it couldn't work and also thought as the relationship had only been a couple of months old it wouldn't take long to move on. I was pushing my emotions to the side, hitting the gym and concentrating at winning in other ways. Getting over a relationship just isn't linear, there ups, downs and u-turns and ignoring my emotions was stupid, our emotions make us who we are, I should have embraced them. So after weeks of being fine but a little sad I've now recognised that actually I'm very sad. Nothing can change this, I just need time.

Being open about this has made me want to be open about another thing, my weight. I never post it as I rarely weigh myself but I've started to at least check progress using the balance board on the Wii. I look at what I've lost rather than the weight, In the last 2 months I've lost about 10lbs which I'm pleased about, I'm eating what I like but working my butt off. I say I eat what I like but by this I still try and have a super healthy breakfast, an okay lunch and a less than perfect evening meal. With the sadness I find I don't eat as much as I should but I'm doing better, I've just been patchy in the evenings but usually eat okay in the day.

Now the other thing weighing myself on the Wii shows me is my bmi, I am now just in the overweight category no longer obese and for some reason this annoys me.

I've never been a competitive person with others but when it comes to myself I'm my own worst enemy. This led to eating disorders when I was younger and looking at my bmi didn't help, I was midway on the normal range whilst looking skeletal, so to me I was perfectly in my right mind to lose more weight. I grew up swimming so was quite built before I started looking at the numbers, It was never pointed out how things could vary, when I was a young teenager I didn't even take into account the differences in height. I grew up thinking women had to weigh below 10 stone. Now I've worked my way through my eating disorders and fully feel in control of everything, it took until early 2013 but I got there and January 2013 is when I officially started to get better but I still feel a bit baffled by all the numbers, do they really matter? Is making the effort to exercise and feeling in control of what I eat more important? I think so.

I want to compete with myself when it comes to working out but I don't want to use the numbers against me. The problem is when you compete with yourself you're not only always winning but also always losing, and I'd like to be somewhere in-between.

Half the battle when it comes to obtaining a healthy body is obtaining a healthy mind. With so many magazines that are seemingly against it's hard to not develop an all or nothing approach, plunging us into the world of yo-yo dieting. The truth is that keeps the cycle going, it keeps dieting an industry. You can eat chocolate and lose weight, you can eat chips and lose weight, just keep it in balance and forget about what the magazines tell you (although I have to say I find Cosmo Body really balanced along with Women's Health), do what makes you happy, eat a little less, exercise just a little more and you'll get there, eventually, and most likely stay there.

Instead of ending on a downer I'm going to mention some happy things. I entered the triathlon challenge at my gym, there are three levels, Sprint, Olympic and Ironman, I've completed Sprint and have nearly finished Olympic so I'm pleased with that. Also I have gorgeous new trainers, behold; 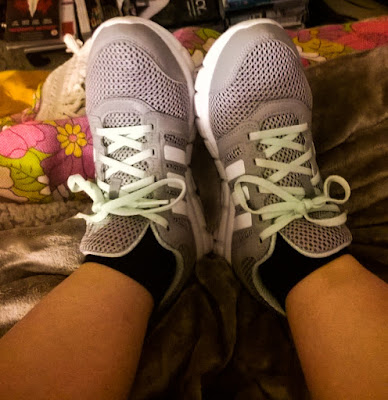 I hope everyone is doing well with their challenges, physical or mental.