It's here, Samhain's October Purrfectbox arrived on Saturday which meant two things, I got to treat him and that he was most likely to get himself into a fight. It doesn't always coincide but this isn't the first time I've said that I've been able to treat Samhain after getting himself into a scrap. 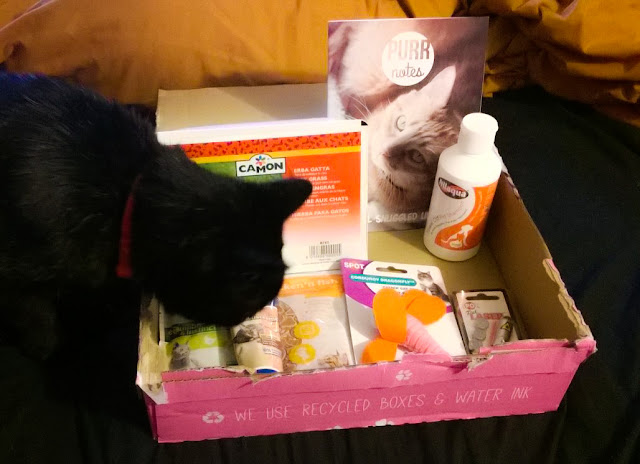 The thing I like about Purrfectbox is I feel that they have appeal for the owners too. Now I don't mean something for us to use ourselves but those practical products that can come in handy. This month is no exception.

Nilaqua No Rinse Pet Shampoo (£4.45 for 200ml)
I was happy to see this, Samhain was curious to smell it but was disappointed it wasn't food for him. His fight earlier on gave me a good reason to try it out. As you can see above the product is pretty runny but foamed up in his fur. He was slightly annoyed at first but got right in to the massage, the product doesn't need rinsing so after massaging it in I used a towel to dry it through - he loves a towel rub down. It made his fur shine immediately but even more noticeably as we cuddled up to get to sleep I noticed how soft his fur felt. I think this might quite easily become a weekly tradition. I didn't need to use that much to cover him completely so a little will go a long way. Who knows, he might even find himself a lady cat friend as it smells really lovely, although that could be just to us humans.


Ethical Products Inc.- Spot Laser Toy (Usually around £4.50)
We've had laser toys for Samhain before and he loves them. This was well timed as his old one is broken, the end won't screw on properly. It's one of those toys he is guaranteed to go mad for. It's strange as so many toys appeal to cats because of the taste or texture whereas this is simply a red light. He really goes bonkers for it. With other toys he'll only play with them if I'm doing the shaking but I can give this to anyone to use with him making it ideal for my dad to use (he collapsed last year and isn't able to move about easily) from the comfort of the sofa.

Les Filous - Mini Chicken 'n Fish (50g)
Samhain is a big fan of dried protein style snacks, he has trouble biting into things on occasion as he has really busted teeth but he found these chewy bits of real meat easy to chow down on. To be honest he wasn't sure at first but once he'd chewed one he wanted to keep going.

Camon Cat Grass (Usually around £5.00)
Samhain snacks on grass outside but I've never tried growing some for him indoors mainly as I tried it with my old cat and he really could not be bothered with it but Samhain is younger so I'm hoping he'll go for this. Especially as winter is on its way and the grass outside won't be as delectable as it is now.

Equilibre & Instinct Bio Complete Wet Food in Chicken 100g
Wet food is always welcome to try on Samhain, I have to admit he's a little bit fussy so doesn't always like new wet food but I still like to try it out on him. This is a complete wet food, in chicken and mashed vegetables its ingredients are 100% from an organic source. I try my hardest to feed Samhain organic food but as I mentioned before he can be fussy. This is more of a mushier texture like traditional cat foods which is Samhain's preference. 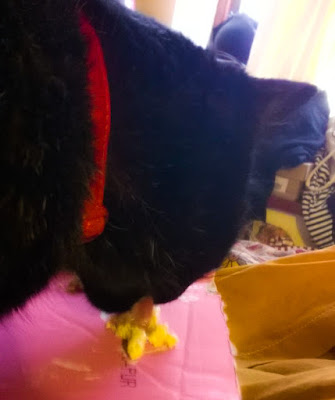 Trixie Salmon Pâté (£1.99 for 75g)
I never buy pâté for Samhain, it just isn't that common in local pet shops but he really gets into it. He is always funny about it at first, he never takes it from the tip of my finger these days but if I leave a bit out on a plate (or a strip of cardboard) he just laps it up. I wish I made more of an effort to give him pâté as a snack because it excites him, plus this particular one has no added sugar, gluten free and with taurine. 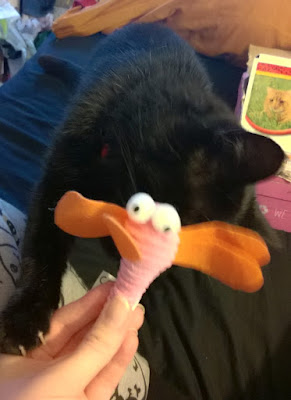 Ethical Products Inc. Corduroy Dragonfly Toy
Samhain loves his toys, he is spoilt rotten with catnip toys, I don't even want to think on how I would spoil a child if I had one as this cat pretty much has everything on the market. I do stick to the brands I know he loves to be on the safe side so receiving something new to try means there is always a chance that he won't like it. As soon as the box was opened he went for it, I couldn't actually smell it that strongly, I'm used to picking toys out in shops by sniffing them! But this appealed to him. One of his favourite things is being rubbed by his catnip toys and the corduroy is a lovely texture to rub him down with. 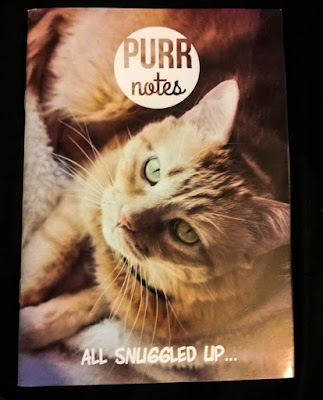 Another lovely box full of goodies for him and for me to use on him. I'm looking forward to growing the grass to see how he takes to it, as well as remembering to give him pâté as a daily treat!

The box was sent complimentary to Samhain and myself for an honest and open review.

Wanting to give Purrfectbox a try? But want to save money? The unique code below entitles you to 25% off your first box on any one of their plans- including their monthly, 3, 6 & 12 month subscriptions!

More information on this can be found on their website.
Posted by Unknown at 12:00