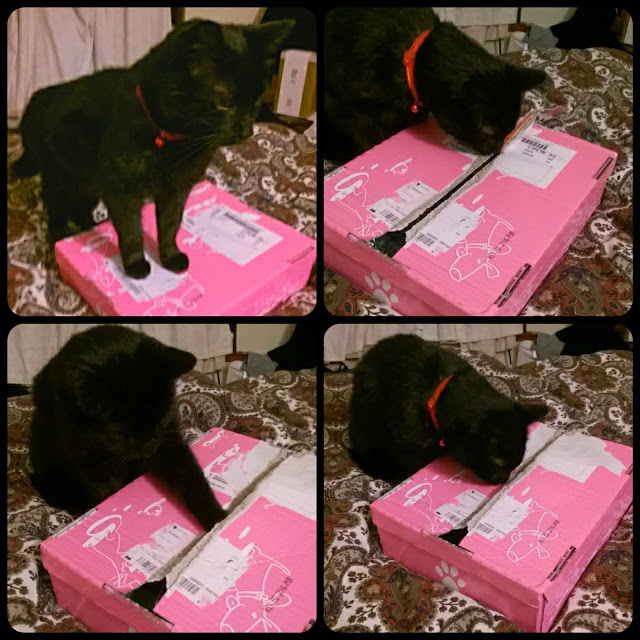 We've had another busy month tackling fleas and fighting - although just the one fight, since rescuing him his temperament has changed a lot but the odd fight still happens, fortunately for the other cat he isn't very tough. Now fighting does not earn him rewards but he was given the box a few days before getting into a squabble, so what's in the box this time?


This box is lighter than usual, the Purrfectboxes usually contain bigger or bulkier items, you can usually guarantee there is one item that is functional to use as a cat carer rather than the cat enjoying it themselves, this box was no different but the stuff this month was smaller. However this was Samhain's favourite box, favourite favourite box as it had three new toys.

There was one clear winning item in this box, I hate to pick favourites but Samhain flipped for the dolphin, it was love at first bite. Something happened when I was asleep as I awoke to find the dolphin on one side and Samhain on the other, something went down that wasn't necessarily good but it was passionate and I'm sure neither of them will forget that one night together.

I digress, let's get on with the contents of the box.

Samhain received three toys in total, I've already mentioned the very popular dolphin catnip toy, this was from a brand called 4Cats. To look at I wouldn't have thought it would cause much excitement but it really impressed Samhain.


Also in the box was a Trixie Catnip toy, also very popular as it has a dangly tail. All cats love anything that dangles which is of course why they have tails - apart from those rebellious Manx cats. I'm used to the brand Trixie when it comes to cat litter tray bags but they actually have an amazingly vast array of toys, Samhain is very particular so him liking this is a big plus. In his box was also a Pet Brands Playtime Catnip Crochet ball with a bell on, he's quite partial to a tinkle but Samhain is also fond of being able to pick his toys up which is easy to do with this.

As you see, a lot of toys for him to choose from. I'm going to move onto the "dull" part, the item that appeals to us and not the cats, This time we have Pet Brands Deodorising Cat Litter Crystals. Samhain does have a litter box but we don't really have an odour issue which is why I've never thought about using something like this, I'm guessing I just don't notice the smell any longer so this might make a difference to visitors to the house rather than myself.

The last two items are both food treats. One brand we've had before, Pet Munchies - Samhain loves freeze dried snack food, these are quite small chunks, for him I think he would prefer them a little bigger but he still loves the taste. The one we received was the fish fillet, Samhain can be a fussy pussy with wet fish but the dried stuff he loves. The next item I haven't seen any forms of before for cats, caviar from Schulze, this kind of creeps me out a little bit when I first saw it but it isn't like caviar as most of us know it (not that I ever have it or ever would) it's more of a dried fish. Any kind of dry snack Samhain loves, he's definitely more of a biscuit cat than wet food and the same goes with his snack food, dry good, wet bad.

It's so dark and miserable out still so it's nice to have a little treat to share with Samhain when I return home.


The box was sent complimentary to Samhain and myself for an honest and open review.