Samhain is a lucky boy. Not only does he have me taking care of him but he receives early Christmas presents - I wish I did. 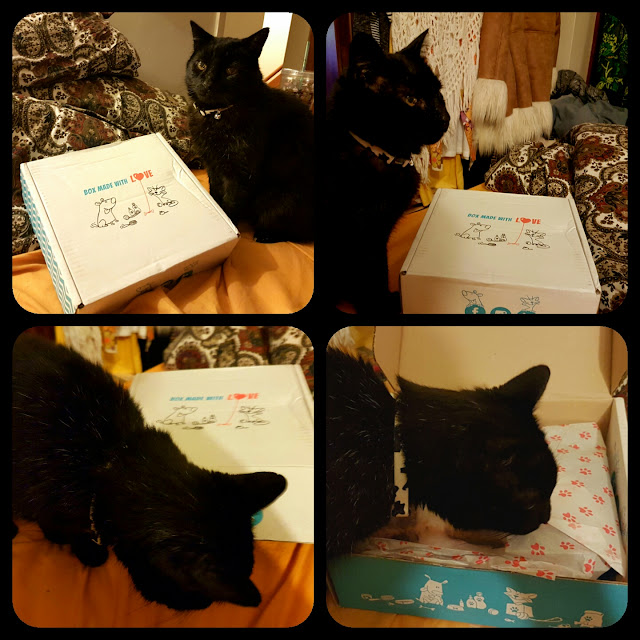 As usual Samhain was excited to receive this box but he allowed me to take a photo or two before we opened it. Although it was hard with him giving me the sad eyes.

So what's in the box? 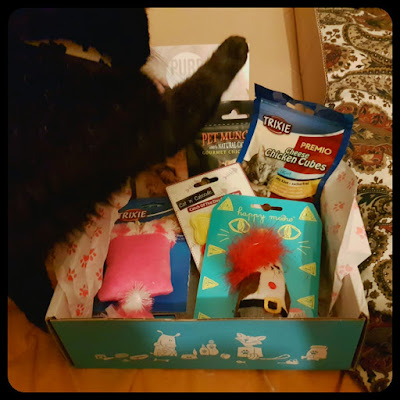 Samhain tried to grab the magazine first before creeping around the box to take a look at the goodies from a different angle. 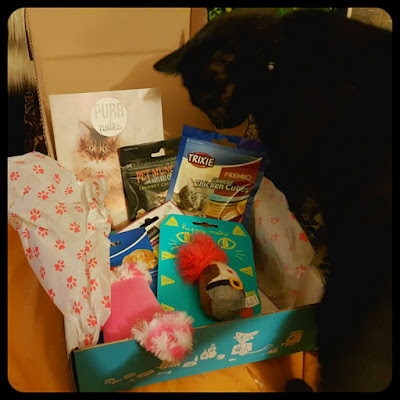 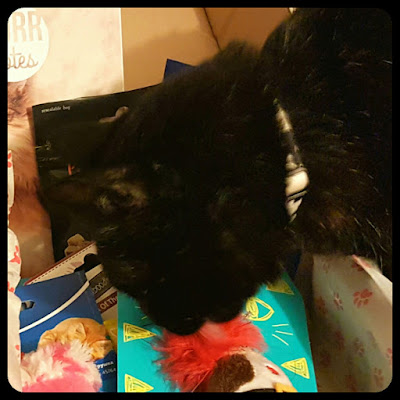 Next up he starts to lick everything before attempting to bury his new stuff. He's a rescue cat and in the first few months he attempted to mark the items he liked with urine. Especially after too much catnip. Fortunately that's a habit he's got over.

I'll start with the item Samhain just won't care about but useful to us human folk, Pet Brands Deodorising Cat Litter Crystals - it's a bit hard to tell whether this will be useful as I have to empty his litter box as soon as he does his business so I never notice a smell. I, of course, live with a cat and possibly can't tell so it might be more for visitors to the house rather than those living in it.

We'll move on to the food goodies. A new one for Samhain, Trixie Premio Cheese Chicken Cubes. To be honest at first he really wasn't interested in these snacks, I think the texture was strange to him - he is a fussy eater, but after he got used to this he really enjoyed them. The other food treat we received was Pet Munchies 100% Natural Cat Treats Gourmet Chicken Liver. He's had these before and although he isn't quite as into them as another big brand he does enjoy them, instead of one at a time he tends to eat a small pile instead. Dried meats are Samhain's favourite style of snacks, it's a good thing they're not completely bad for him, well they aren't bad at all, like a healthy in-between meals snack.

Now the really exciting part. I've never known a cat that goes for toys before food but Samhain does. He has a stupidly large collection of toys but I can't deny him a new toy, or three, I'll just need to move into a bigger house. In this box he received a Trixie Playing Cushion with Bell, Happy Meow Pirate catnip toy and a set of 3 Catch of the Day catnip toys. Usually there is an overall favourite when it comes to toys and I'll be the first to admit it but he liked them all, not quite as much as other brands but enough for him to give them all a good licking.

The box was sent complimentary to Samhain and myself for an honest and open review.


Even better, if you want £5 off your first box simply enter this code: ukbydipc
Posted by Unknown at 07:00