This week hasn't been so great for Samhain, he has been in a fight AGAIN, I know this will keep happening until he sorts out his territory with the other male cat in the neighbourhood but it's distressing, at least for me, he really doesn't seem to care at all. He ended up torn to shreds, his back looked like Freddy Krueger had been at it, both his ears were cut both inside and out plus there was a cut around his eye. Worse than all of that were all the puncture wounds on his legs. This had all happened even after I broke up the fight, the fight that was in my neighbours garden, three doors down. I'm very fortunate they allow me to go into their gardens to sort this out as he is a scrapper, even though he seems to be worse off he still gets himself into trouble. They both go at it forever, neither backs down and it just gets too bloody. I hope they sort it out soon as it is every other day, this one ended up with another trip to the vets to be on the safe side.

This really meant the Cat Hampurr was very welcome this week, he needed a treat, especially as I've had to stop him from going out until his worst wounds are healed. So he was in a bit of a grump with me until I gave him his box, so what did he get? 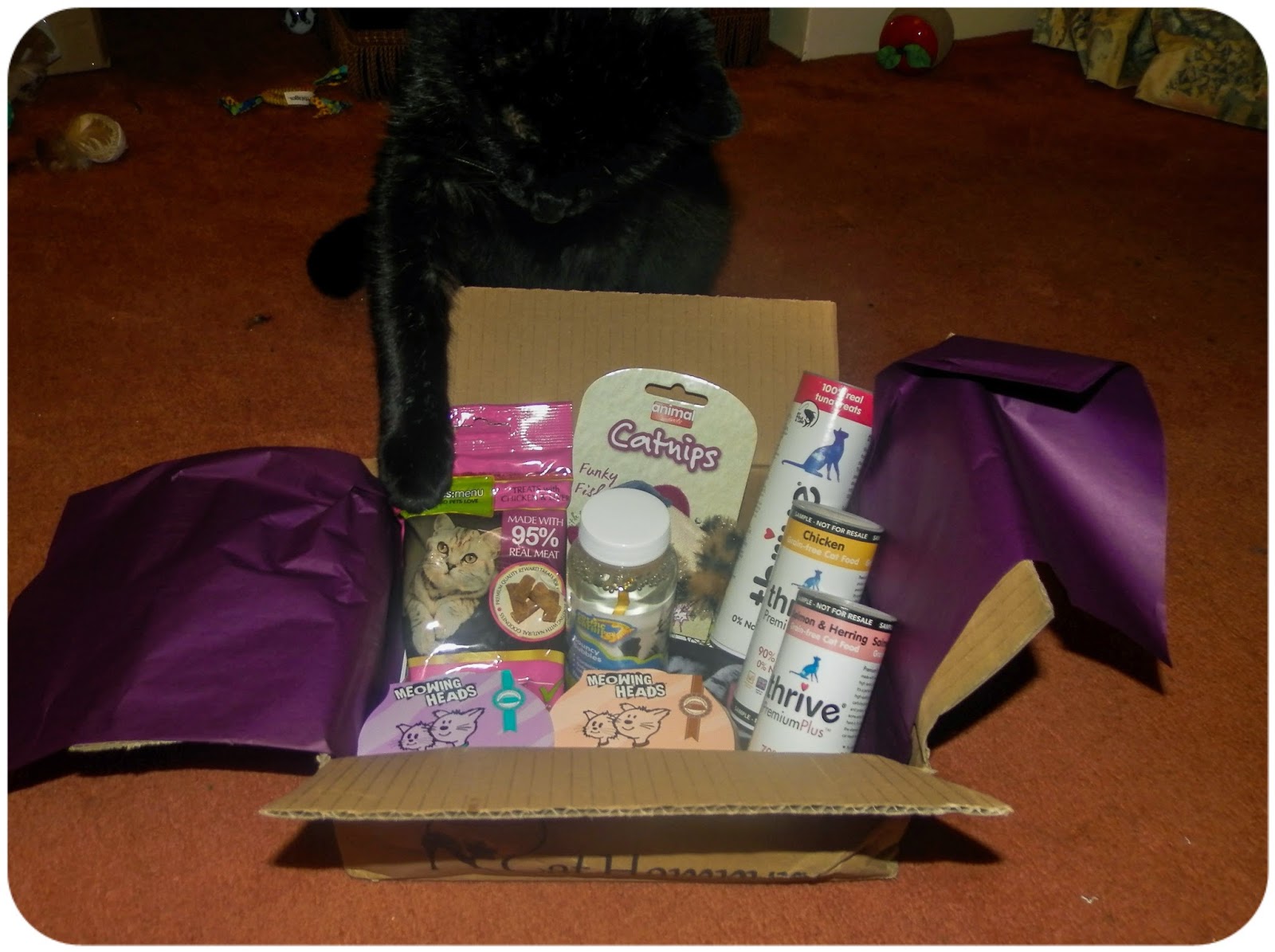 Meowing Heads Complete Wet Food Gone Fishin' & Drumstix 2x85g
I was excited to see this in the box, new wet food that he likes is always good to add in to his diet. I'm always trying to add more quality products to his diet, of course he has to like them. I tried the Drumstix pot the very night we opened the box. I wasn't sure at first as he doesn't always go for terrine style dishes but he just wolfed it down, he absolutely adored it so I'll have to pick up some more. Today I'll try the Gone Fishin' he is super picky with fish unfortunately, I'd like him to have one fish dish a day, luckily he has just fallen in love with the Applaws Tuna & Seaweed which was a relief but hopefully he will enjoy this as well because he needs a mix.


Thrive Complete Dry Food Chicken and Salmon & Herring 2x50g
Always good to see Thrvie, very pleased to be able to try their complete dry food biscuits out on him. He is undecided their wet food, some days he loves it, other days he just picks at it but he does love their dried treats, I use them when teachings him tricks, well, trick! So how did the biscuits fare? Purrfect, he loves them as much as he loves any of his treats, he practically throws them in his mouth. Another item for me to pick up!


Natures Menu Chicken & Liver treats 60g
I haven't seen these treats before in the shops but they look like a cat deli chew stick just in smaller pieces. The flavour is chicken and liver but to me they smell somewhat like bacon Wheat Crunchies. As you can see from the photo they were the item he was excited about trying out. They lived up to his excitement, he just gobbled them down. One thing I particularly like is the resealable package - his treat bag is on the corner of my bed, as much as I love having his treats to hand for him I don't want to be able to smell them.


Thrive Freeze Dried Cat Treats 100% Tuna 25g
Now this is a product I already purchase but I do use them an awful lot when playing with him and teaching him tricks. Samhain recognises the packaging/smell so was excited to see this.


Animal Instincts Catnips Funky Fish Toy
Samhain is the first cat I've had in my family that loves to play, he has to have a run around a few times a day. I usually have cat teasers when I play with him but in an adorable but almost sad way he does sometimes play with himself. He likes to throw his smaller toys around so this is ideal, so far he's mainly enjoyed bopping the toy so that it makes the noise and lights up. For some reason this is a comfort for him. He is a very peculiar cat.


Cosmic Catnip Catnip Bubbles
Now I feel like this is more of a treat for me. Not because I enjoy catnip, no, it's down to Samhain's reaction to this. I had some of these for my previous cat and he just wasn't that bothered whereas Samhain is very curious, but then scared, no, curious, he just can't make up his mind. At first he was all "Hooray for bubbles" until he went to sniff one, it popped, he jumped and now he watches with a concerned but still curious look on his face!


I love these Cat Hampurr's, I know I'm completely spoiling him but he gets so excited. He knows what it is when it arrives, he becomes rather giddy but still well behaved waiting until I unpack it all. When I unpacked it this week I didn't have much time to spend with him so it all got packed away straight after apart from the items we were trying. I had the box on the bed tonight and he started tapping on the box signalling that he wanted to try out more items which we did.

Samhain is a joy, he is wonderful and as we don't know his life before he came here just four months ago I want to make sure his life now is a fabulous one, so I'll continue with my mission to find good quality food and toys with a big help from Cat Hampurr's. 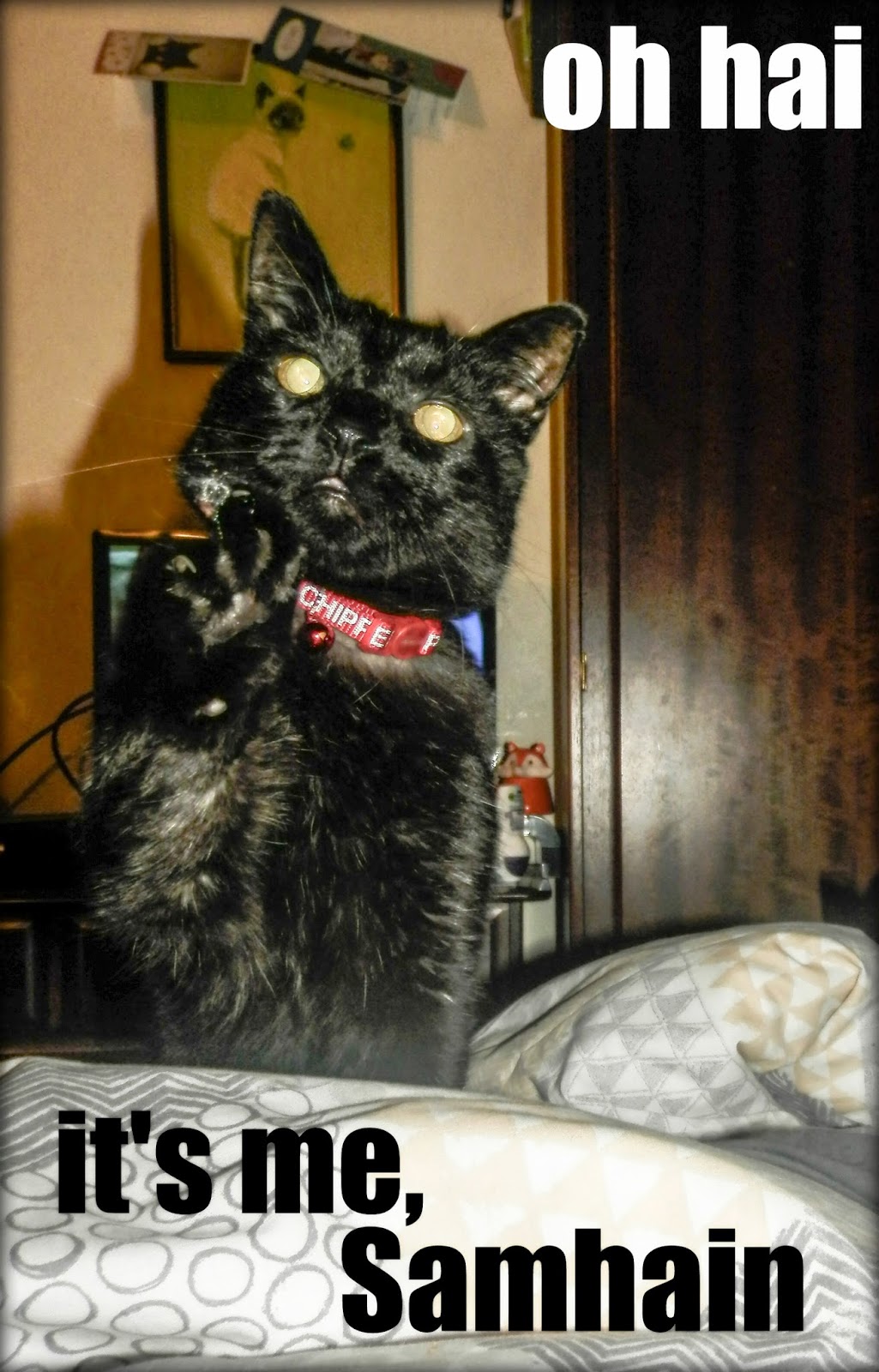