Benefit they're real Mascara - A Comparison 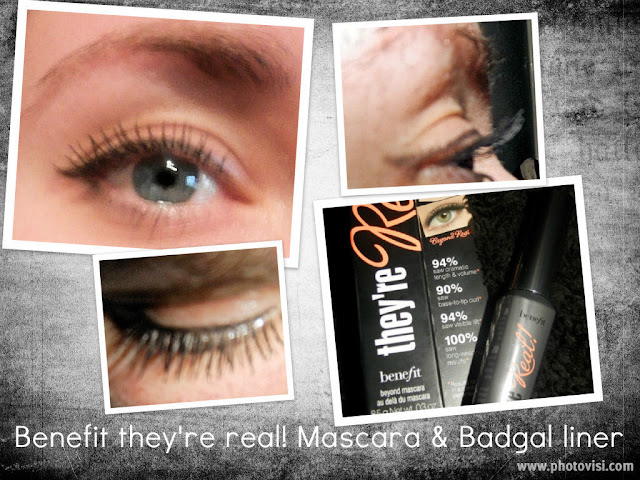 I recently treated myself to the Benefit they're real! Mascara. I'd been wanting to try it for a while but was a bit cautious because of the price, I didn't want to waste my money on something  that wasn't going to work for me.

These days it has become the norm to wear false lashes day in day out, I love the dramatic look but it just isn't for me. I was quite happy with my lashes until I caught a glimpse of myself in a mirror under shop lights in Marks and Spencer, I couldn't believe it, I could barely see my lashes. I've always considered myself to have good eyelashes, exceptional eyelashes even. Possibly a false confidence stretching back to an incident when I was about 4, I was in a clothing shop with my mum and the lady behind the counter complimented me on my eyelashes saying that I would possibly never need mascara they were so dark and curly. that has stuck in my mind even though I doubt I would have even known what mascara was then, maybe it stuck in my mind as I was given a giant plastic red gem that had come loose from what must have been a massive earring, I carried it with me for years.

I've been paying a lot more attention to my lashes recently, I've found some great mascaras but none with quite a false lash effect like the Benefit they're real mascara. It really works for me, I'm super impressed and feel it is worth the money. A friend even asked me if I was wearing false eyelashes which is pretty amazing and I got to say they're real! She described them as looking like a natural false eyelash which is true. Like with everything products work differently on others, where as the photo above shows the outcome nicely it also features the Badgal liner. Below is a photo of me with just the mascara on one eye and nothing on the other to give you on the true difference between me wearing the mascara and my natural lash. For me it's all I could need, I've also managed to wear it for 12 hours straight without it budging or flaking, and unlike false lashes, they don't end up going rogue.