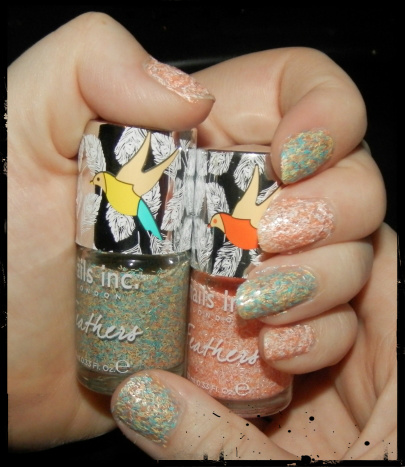 I was really excited when I saw the Nails Inc Feathers collection, after using it though I feel a little mixed. I bought York (peach and white) and Chester (blue, yellow and peach), I decided not to put another nail varnish underneath, something I slightly regret. I think these varnishes work best with a pale base coat, either white or a similar colour to one of the varnishes.

Out of the two I find Chester looks better, at least against my skin. In my opinion it also looks better on shorter nails rather than long, I don't know why but I prefer the look of it on my thumb nails than the rest. The texture is rough even with a couple of layers of clear nail varnish over the top. When I applied it I ended up doing 4 coats to try and get it even, although if used on top of another colour varnish this wouldn't be necessary. I thought initially that they would chip/peel off easily but it is rather sturdy and will most likely be a nightmare to remove.
Posted by Unknown at 07:03