Sunday Weigh-In: The Start of the Uh-oh Week

This week has been a bit of a haze of tending to a poorly cat and making it through those three short days after the Easter holidays and between my actual holiday. Well, I'm not actually going away but we have a week off, the house is empty so there will be a lot of relaxing and I'll go into this a bit more after talking about this week. 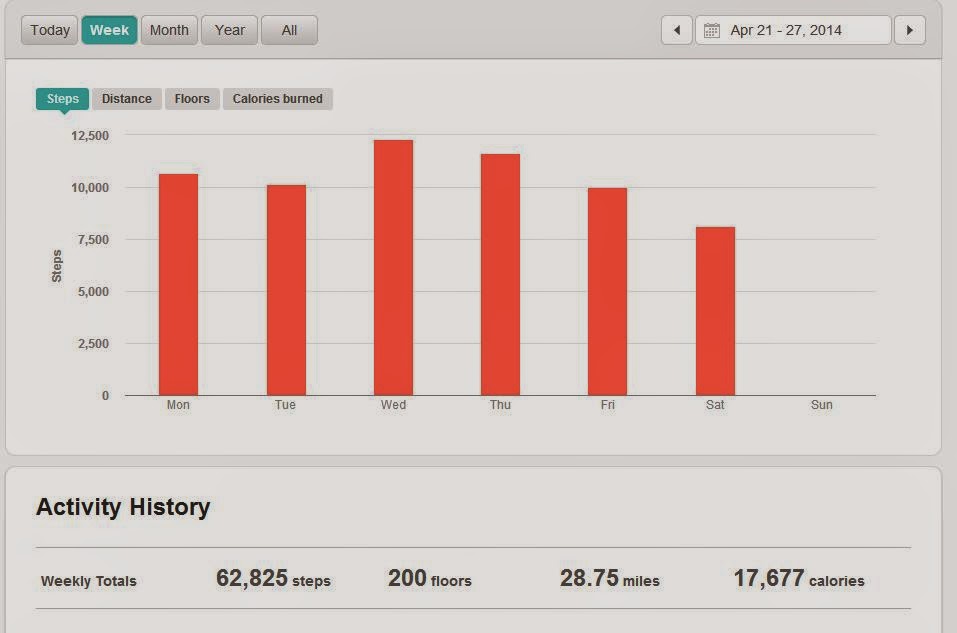 I've pretty much managed to keep up 10,000 steps even on days off apart from Friday where I fell 16 steps short, 9,984, although I'm not getting too upset about it as I take my fitbit off when I get in the shower so I'm always short a few steps from that, easily 16. Plus every other day I was over by way more than 16 so there is no need to get upset.

I've had my usual lunch at work, breakfast at work and for lunch when I've been off I've been having Baxters Puy Lentil and Tomato soup which I am slightly addicted to. I love lentil soup with tomato and it is the only tinned variety I can buy in the local supermarket, I plan to try and make my own once Autumn comes around but for now I'll stick with the easy option. Tea has been a bit of a mixed bag as we have got cupboards and a chest freezer full so we've had to improvise with what we have. Chocolate wise I've not had much of my Easter chocolate at all, I finished the Lindt bunny during the week but that is about it.

Now this week has been a bit of a blur as all I have been thinking about (apart from my poorly cat) is my week off. As we moved in with my parents to save money and because I was ill we tend to have some time off when they are away and although I would love a proper week away this will do for now.

So this is the uh-oh part, how on earth will I meet my steps? I want to say that I'll relax it this week but I know I'll freak out. The plan is I try and get my steps but I will also make sure I exercise at least an hour a day to make up for it aiming to burn 500 calories. If the weather is nice we will get out for a little walk but my week off is a time to catch up - reading, gaming, puzzles, jigsaw, music listening and most of all - film marathons. The plan is to have a week long slumber party - we will drag a mattress from upstairs, set up in the living room and watch film after film after documentary after film after TV show - a nice mix. Now we tend to relax on the food, quick and easy rather nutritious cooking but as long as it fits in then it doesn't really matter.

Food wise I'm going with a reverse traffic light system, breakfast is green so completely healthy, bran cereal, a bit of fruit and a low fat yoghurt - something like that, lunch is amber so mainly healthy but with a bit of badness, for example a salad with a bit of quiche, or a veggie hot dog (rather than two veggie hot dogs and chips, tea is red so we're talking take-away pizza, or tofu from the Chinese take-away. I still plan to keep under my calories but I'm going to be a little more relaxed.


Short Term Goals
To make sure I don't go completely out of control and to step up my exercise even if I don't make my 10,000 steps each day this week, I have to at least try and make them 4 days though. I also plan on avoiding the scales for the next couple of months.


Long Term Goals
A relaxing holiday feeling comfortable with having any photos taken AND to fit back into old clothes. I'd also like to be at a point where I can be mobile without taking painkillers.