Time to post photos of the goodies I picked up in Manchester. I actually started typing this when it was merely a couple of weeks after the shopping trip now it is way over a month it is time to finish this post as I've got some more shopping to show off!

First stop Kendals or House of Fraser as it is now officially known. Even though House of Fraser took over the Harrods group (who at the time owned Kendals) in 1959 the name has only changed in recent years from Kendals to House of Fraser. Although losing many hours of my childhood shopping with mum in Kendals means the name will stick.

Now there were loads of clothes I liked but didn't want to blow all my money in the first shop, sometimes hard to avoid when the first shop is a department store! I was good though. 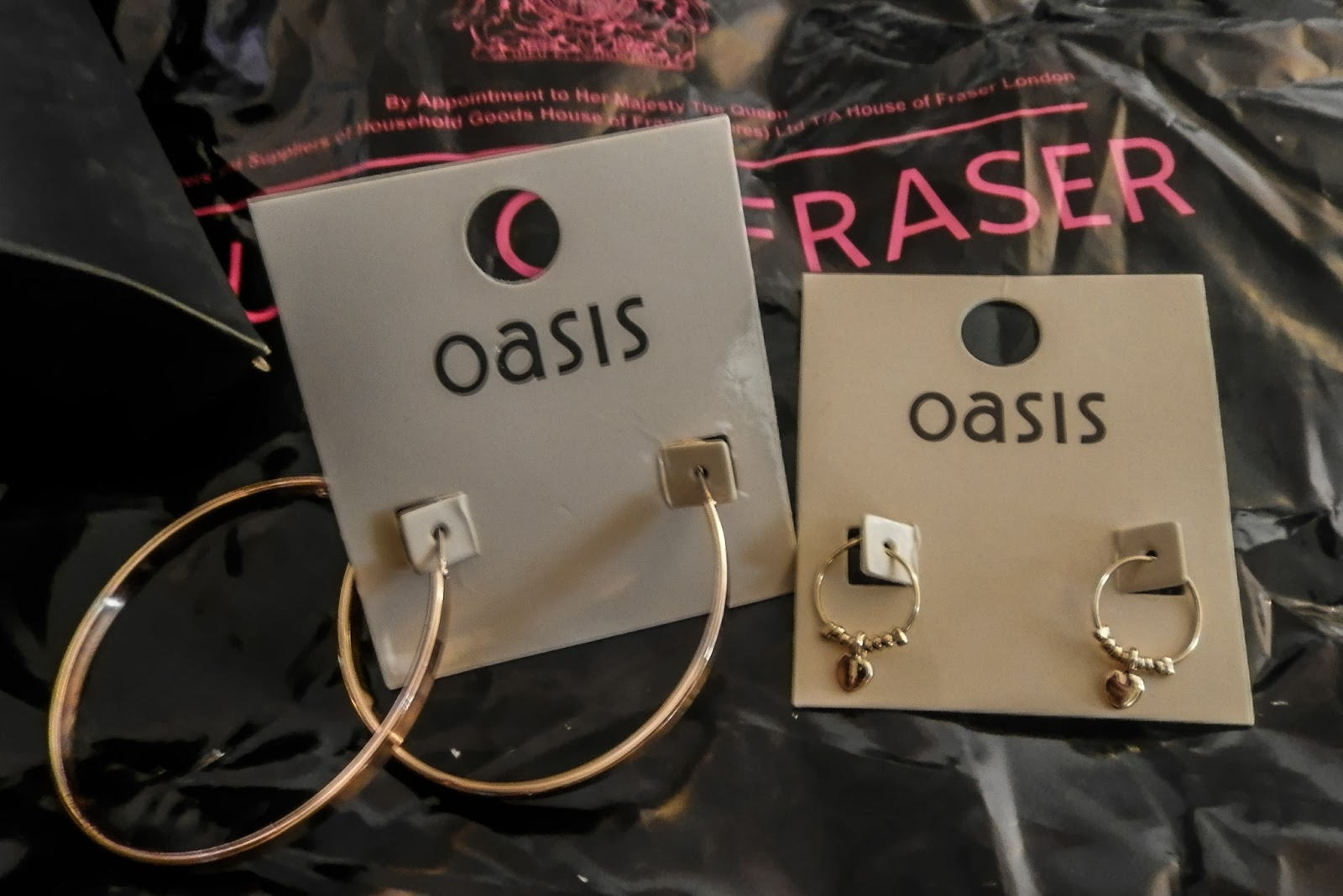 Two pieces of jewellery from Oasis, both bargains at £4 each. The little hoops with the hearts on remind me of my teenage years where Hooped earrings were permanently in my ears, this time a gold colour has replaced the silver of my youth. Then there are the big hoops, I have never in my life worn hoops this big but I was drawn to them! 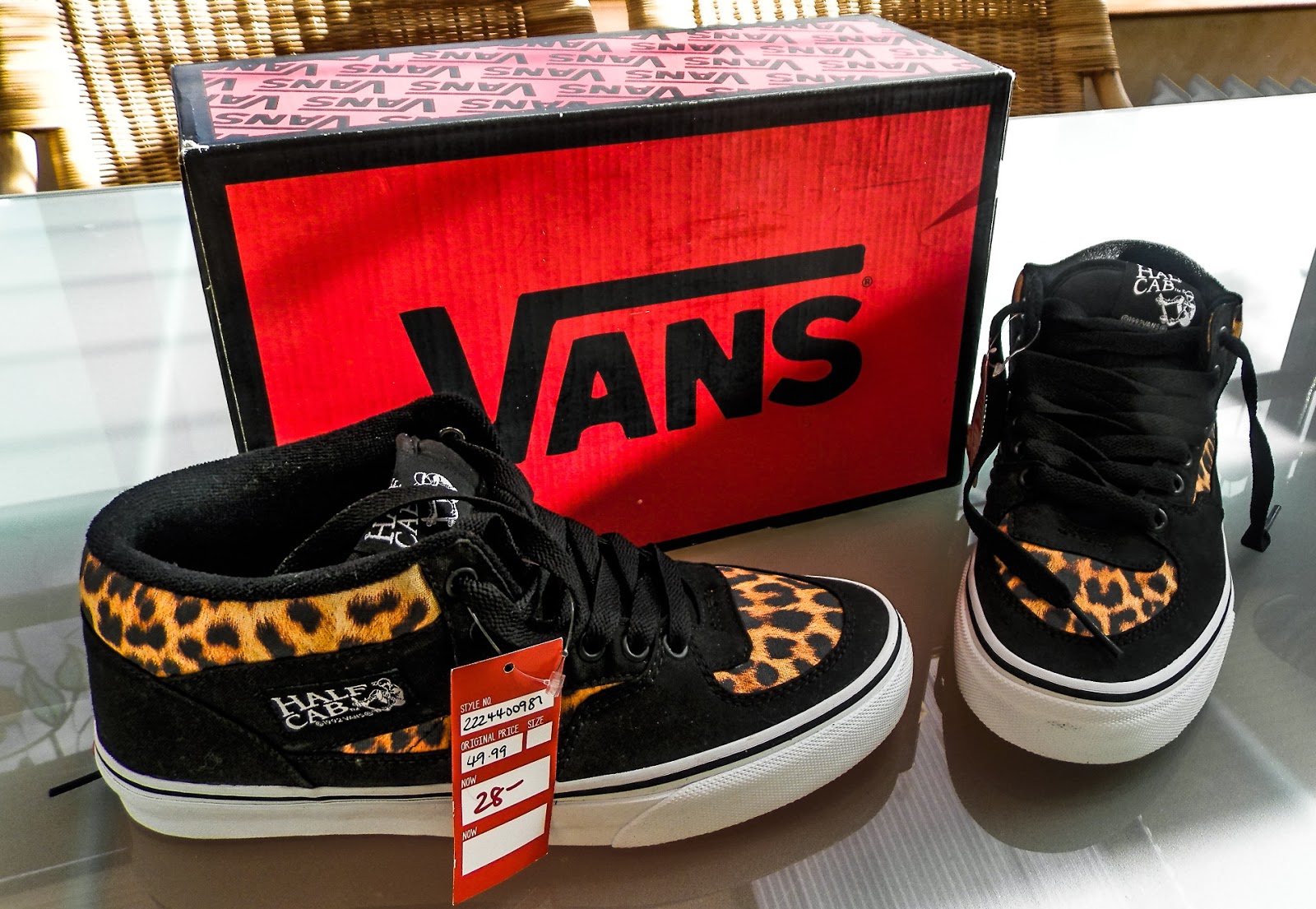 Also in Kendals/House of Fraser I stopped by Office, they had a gorgeous pair of leopard print Vans Half Cabs, I've wanted a pair for a while (not as long as my partner has) and at £28.00 I had to go for it, especially as they were in my size, well at least one of the sizes I go for with Vans. 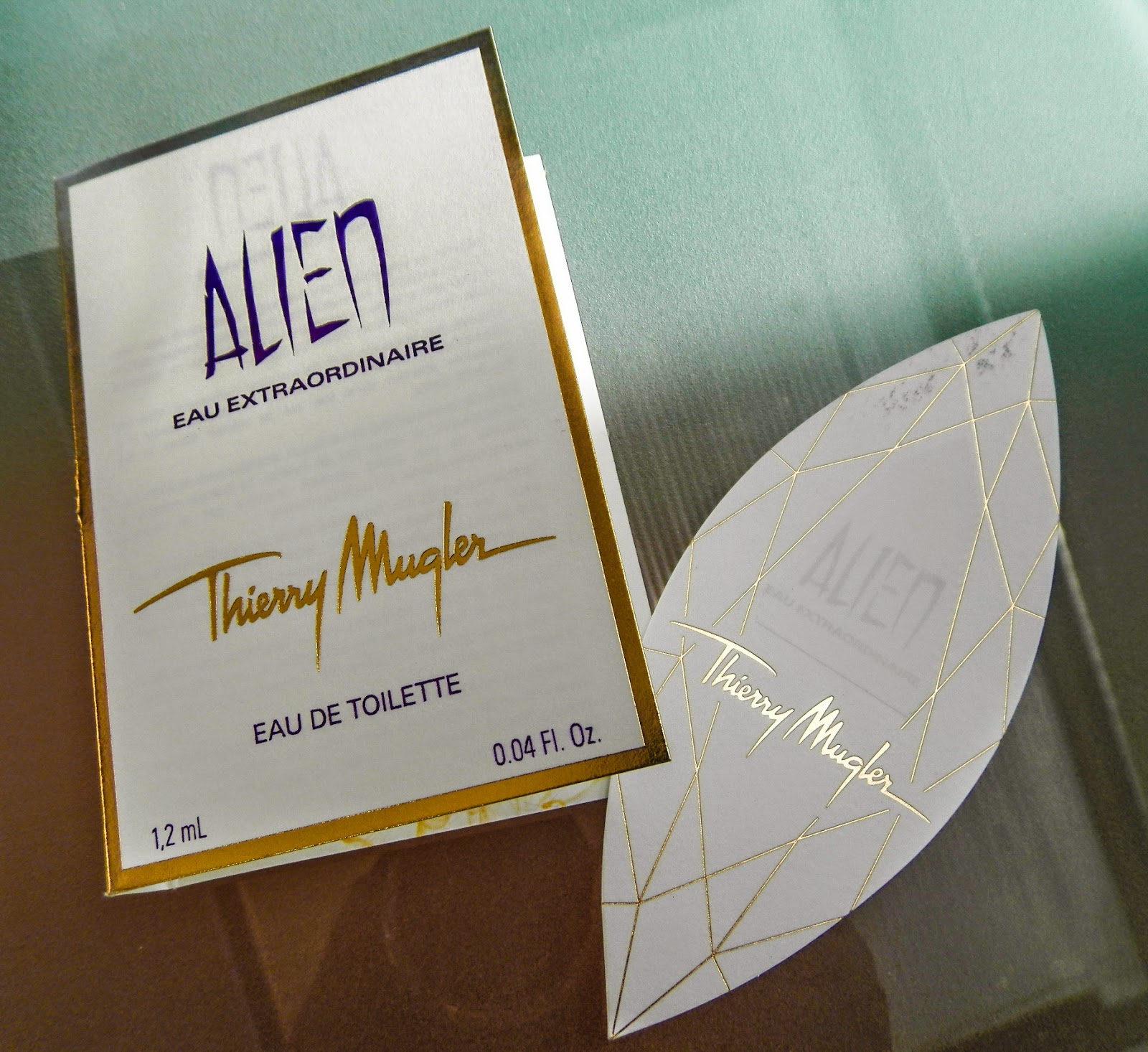 On the way out I was given a sample of the new Alien fragrance, Eau Extraordinaire which I adore and now have a super sized bottle of it thanks to James picking it up for my birthday - he likes to point out he got the biggest bottle! What is it with men and size? 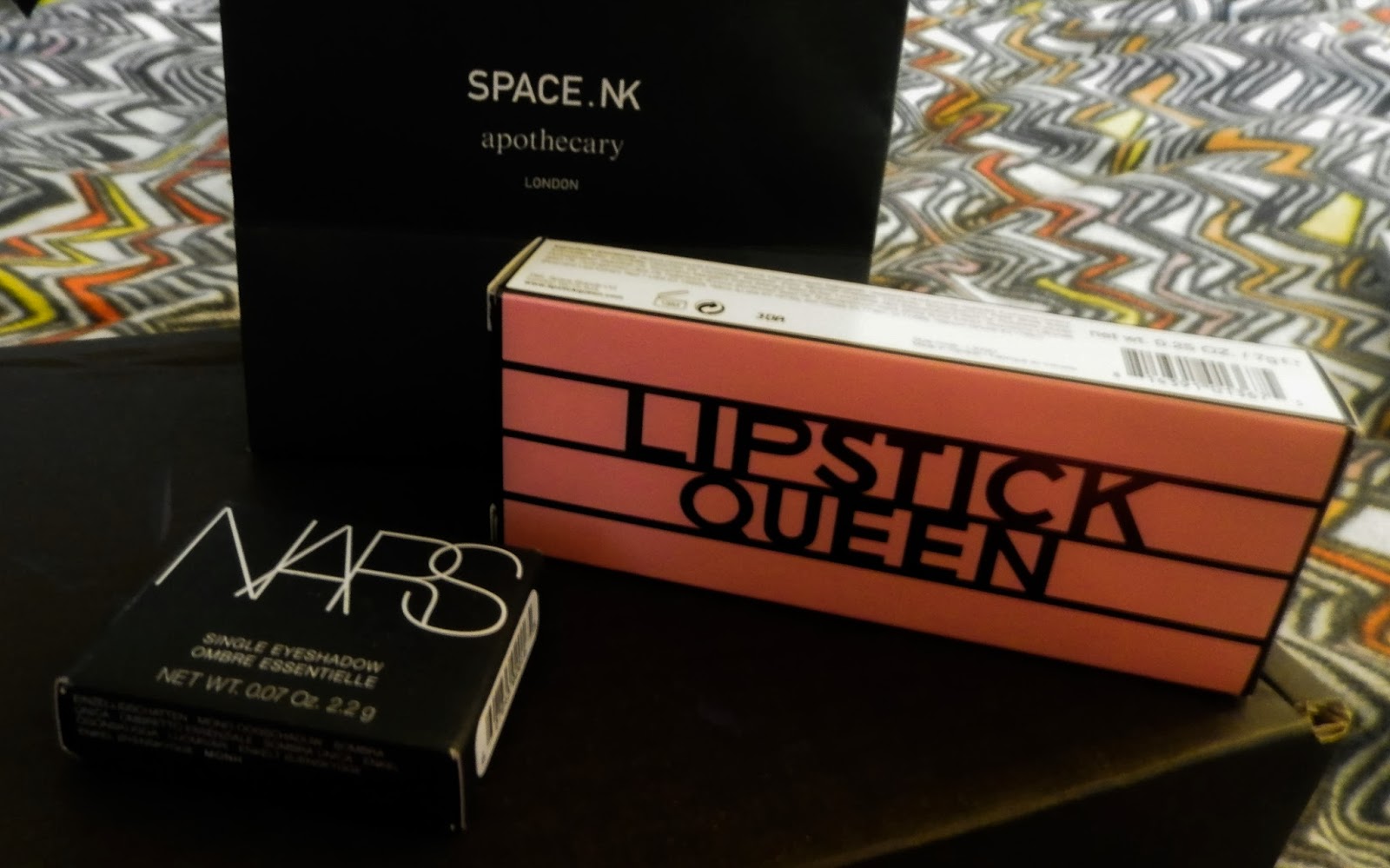 Next stop Space.NK, my first time in one of their stores so it only felt right to go with two products I hadn't tried before. I had quite a few items from Lipstick Queen on my Christmas wishlist but received none, even though I'd browsed their products before it was ever so hard to decide which to go with which is why I went for a daytime shade, Pink Bluff. Same with the NARS eyeshadow, I went with a practical daytime shade to try. 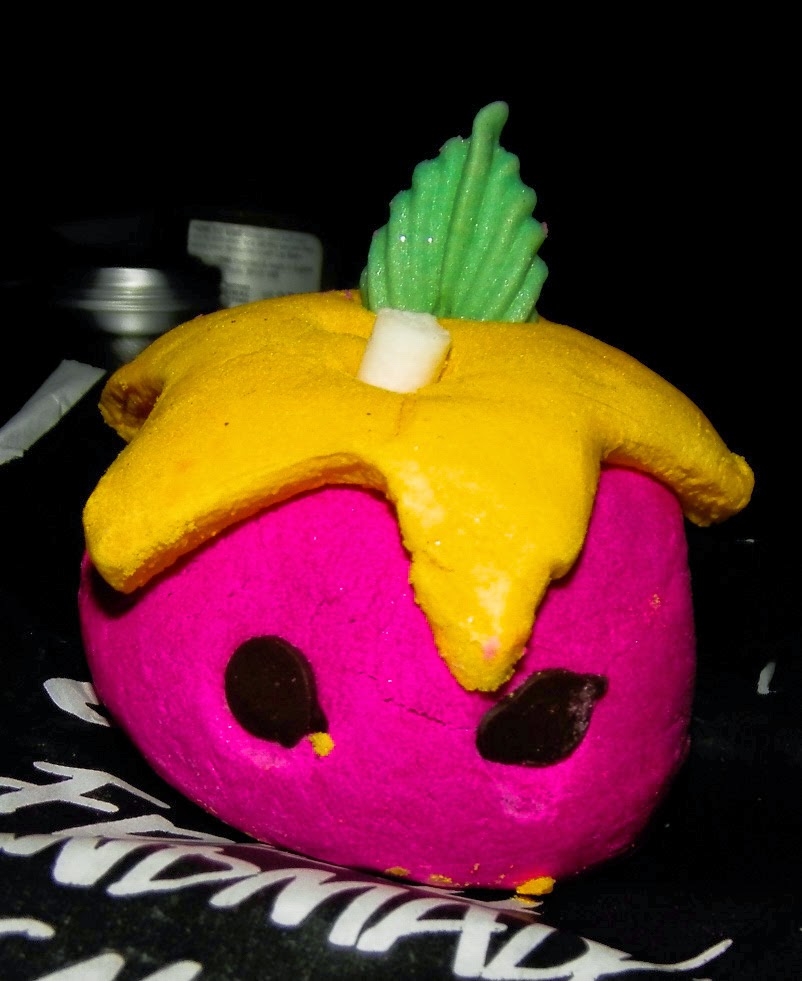 Next up a trip to Lush, I love the Lush in Manchester on Market street, friendly staff and it isn't too big to be overwhelming. I'm honestly like a kid in a sweet shop when it comes to Lush but the real reason we went was to pick up a couple of presents for my friend. I did come out with a couple of things for myself, the Popcorn lip scrub and the gorgeous adorable Mumkin fellow above so I could have a relaxing bath and smell gorgeous afterwards. I regret not picking up any Fun, but it's something for me to focus on picking up next time I'm shopping. 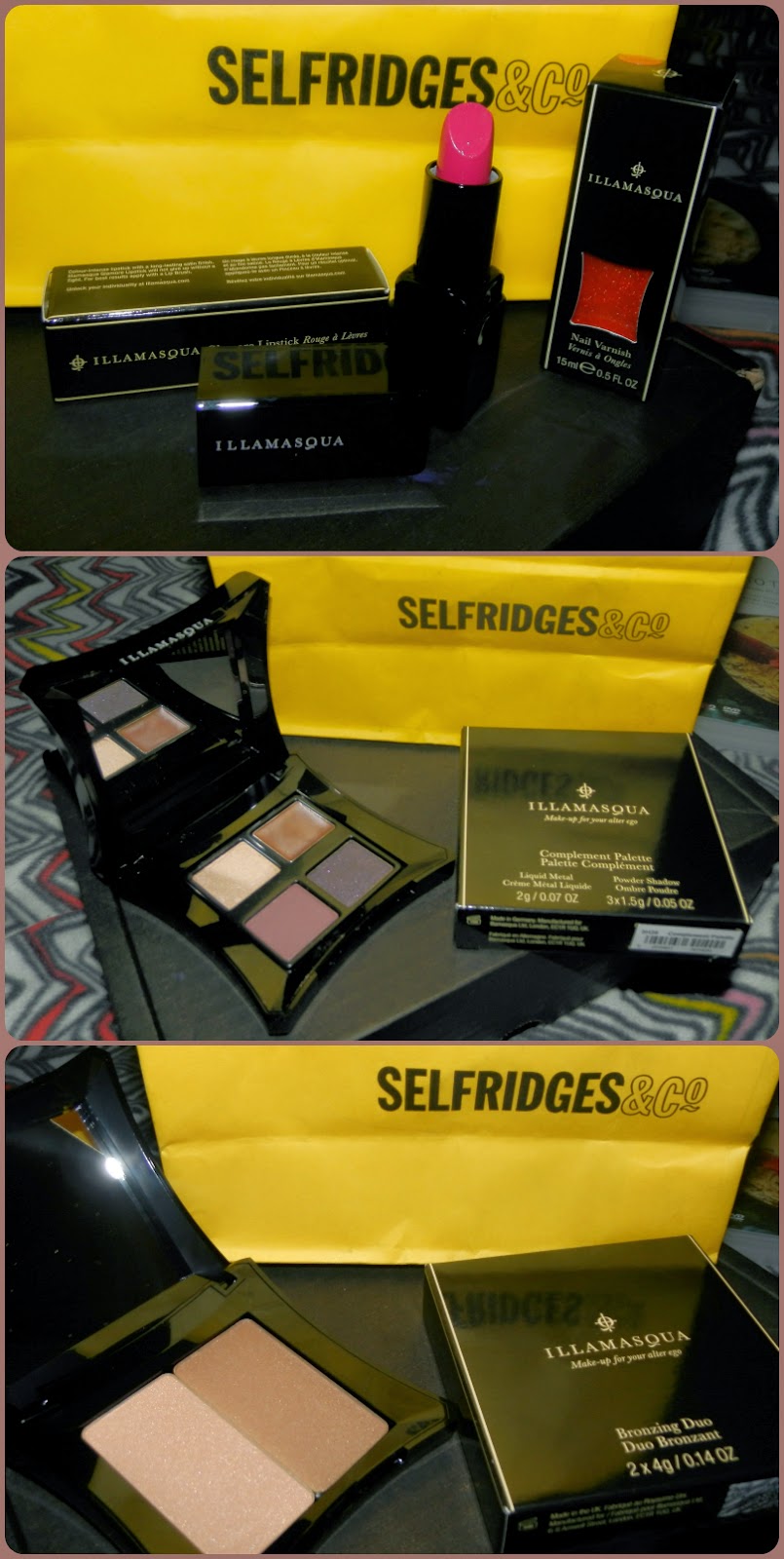 This was my first time in Selfridges, Manchester. It struck me how much Manchester has changed since I used to go as a teenager, some for the best. I was over the moon to see an Illamasqua counter and easily persuaded to part with over £60 in order to get the Bronzing Duo for free (usually £26.00). Now I've already featured two of the items on my blog, two items from the Glamore collection the lipstick Glissade and Shattered Star nail varnish Marquise. The final edition to my shop was the Complement palette, my first palette from Illamasqua. It's a gorgeous selection of shades suitable for both day and evening.

Next stop is Topshop, I bought a lot from Topshop, we were running late so it was my third to last clothes shop. The last time I was in Topshop in Manchester it was in a completely different location! 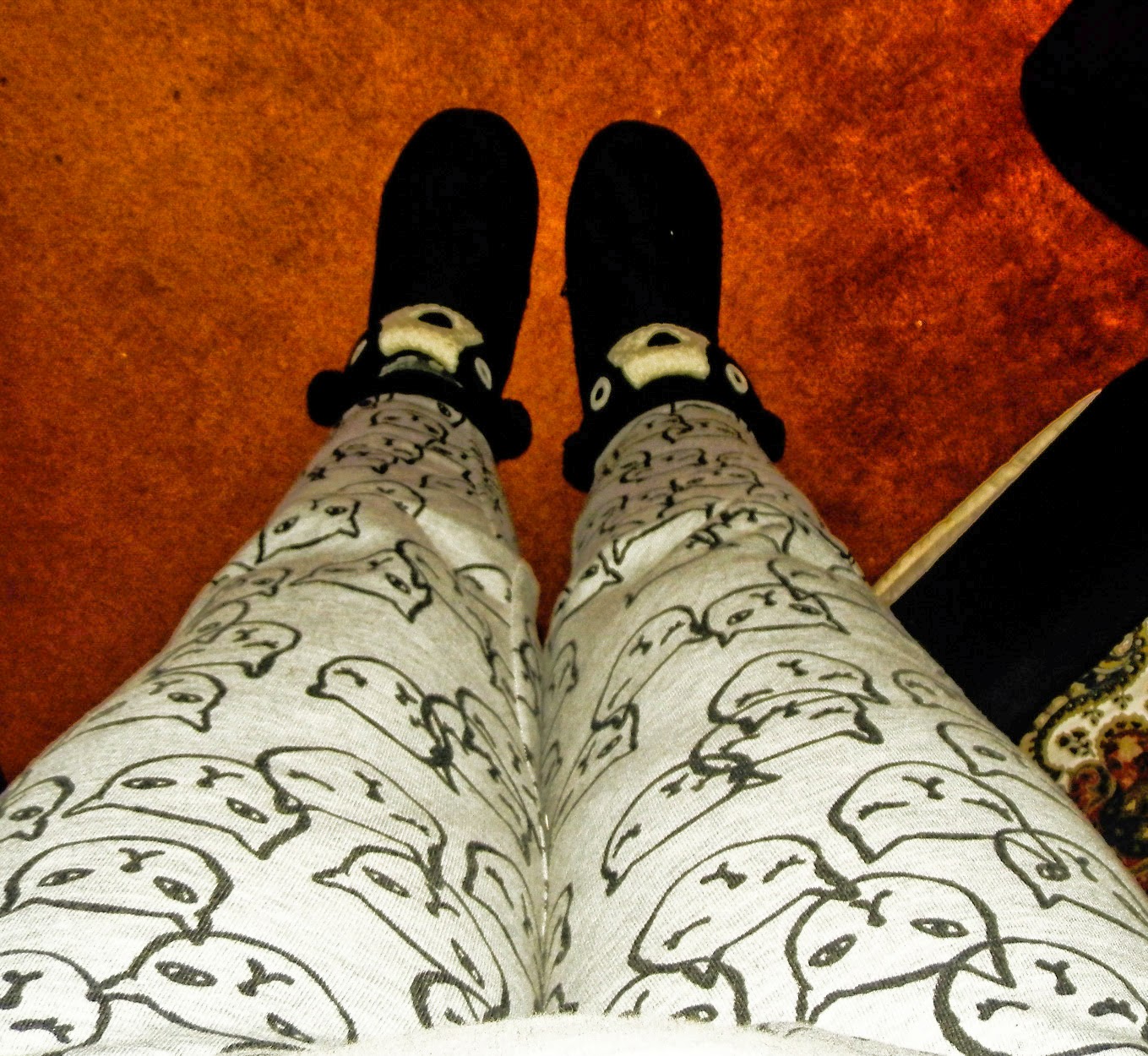 Now I've featured the cat joggers previously but I'm mentioning them again. I love them, they're comfy and perfect for slobbing about the house in. I'm actually wearing them right now. 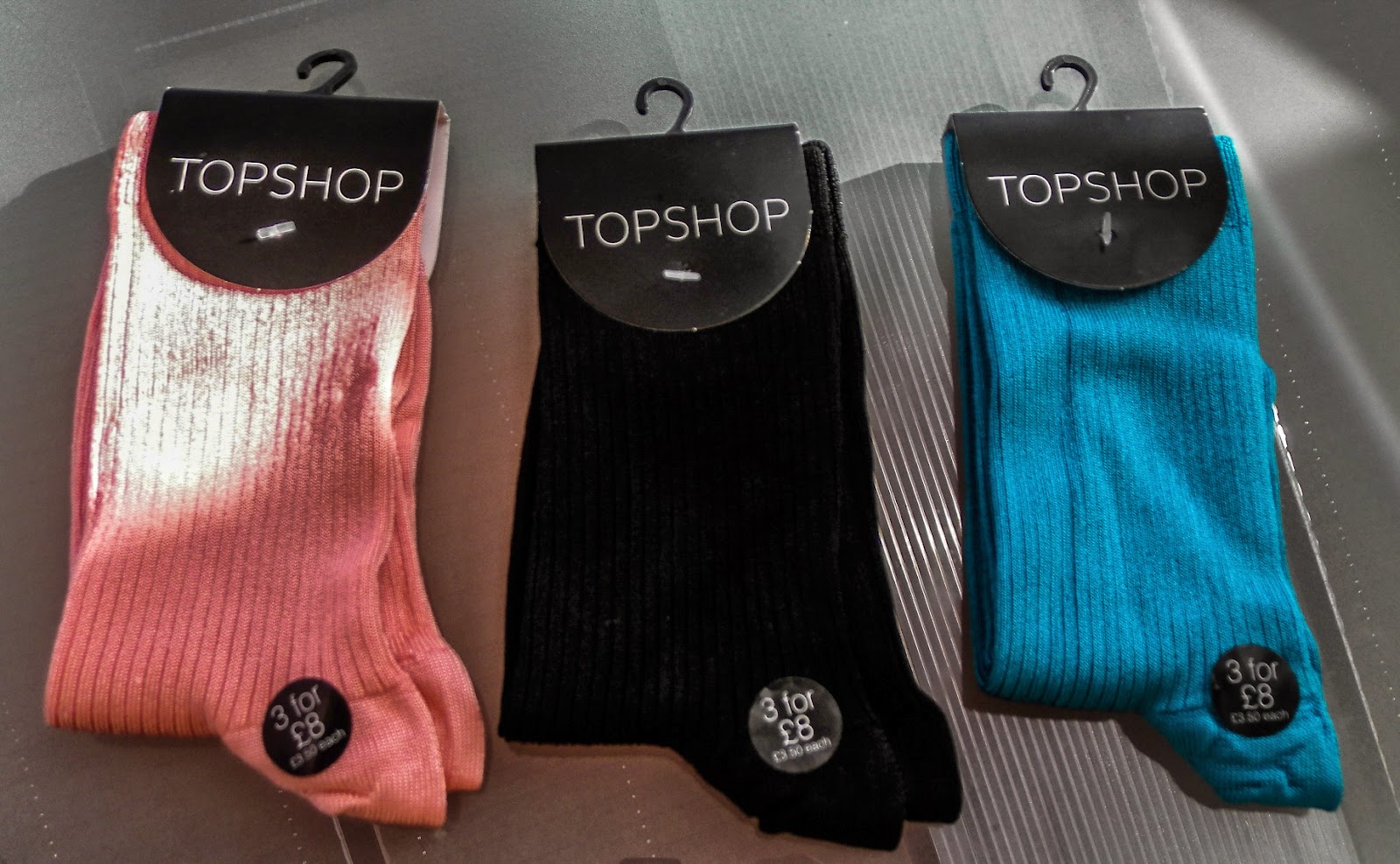 Next up more socks, I can't leave a Topshop or complete and online order without stocking up on socks and these slinky ones are my favourite, not only do they come in an array of colours but they leave me none squeaky, it might be just me but I find a lot of socks + footwear = squeaking. 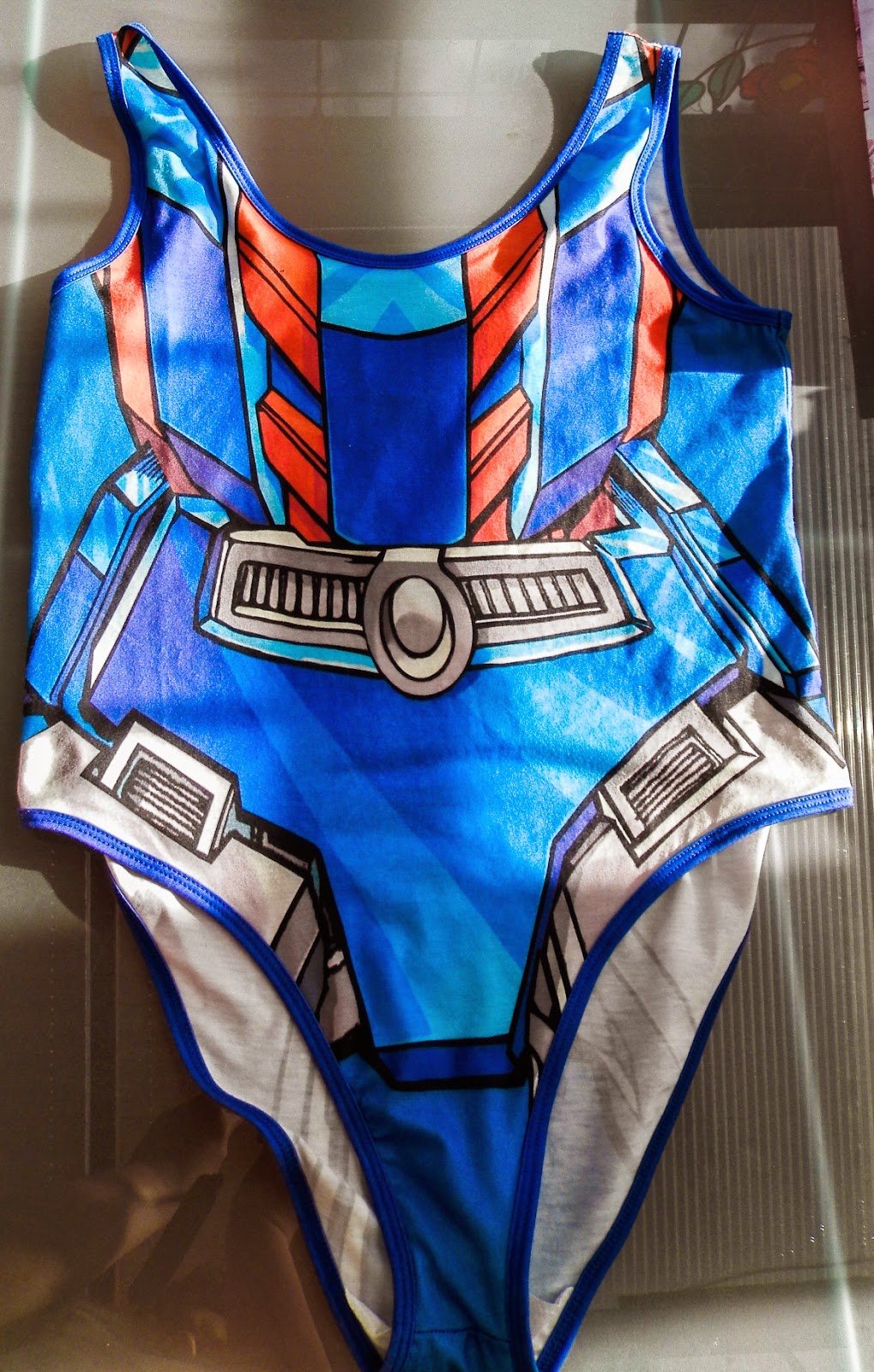 This was my pointless purchase, being a child of the 80's I couldn't resist this Transformers body even though it's slightly too big I love it especially at £5. 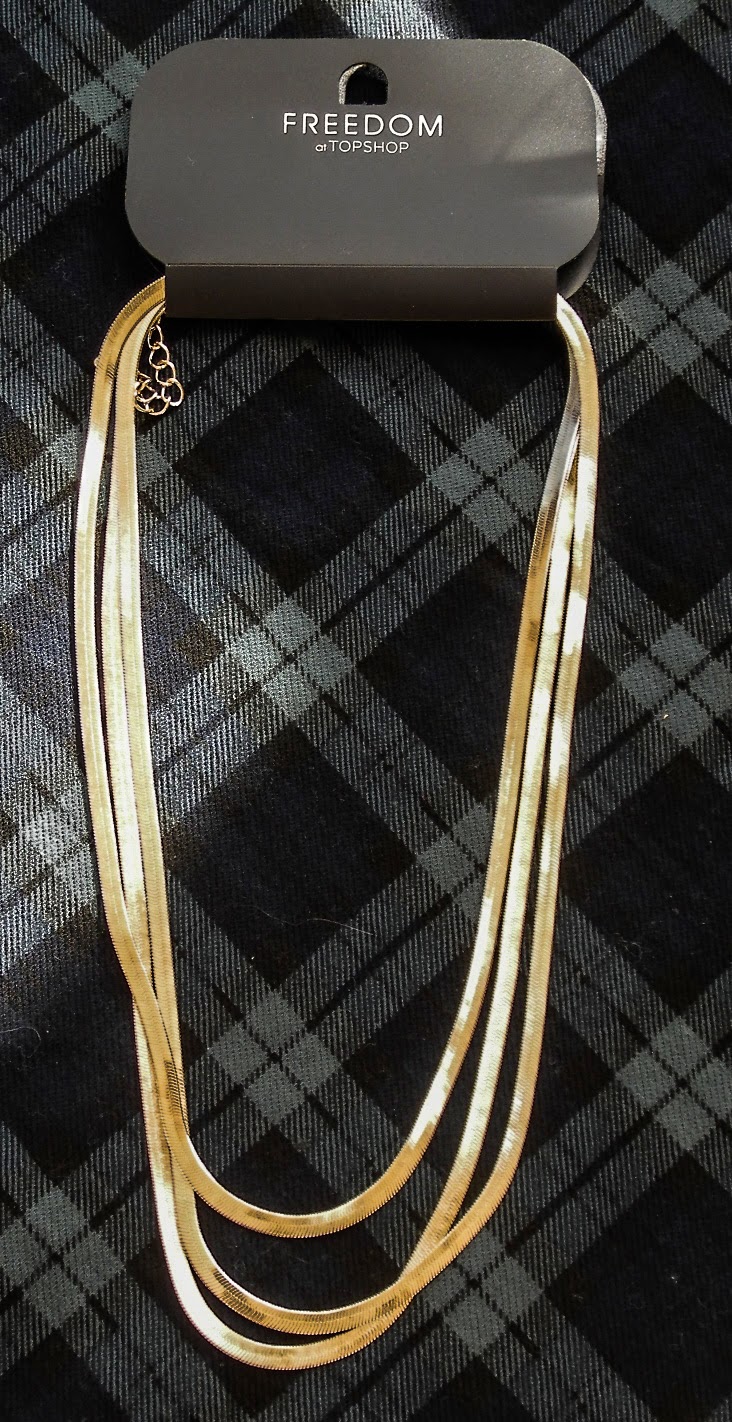 I used to be swimming in jewellery from Topshop but over the years my consumption has become less and less so I had to pick up something and this gold coloured flat snake chain multi row necklace was perfect for £10. 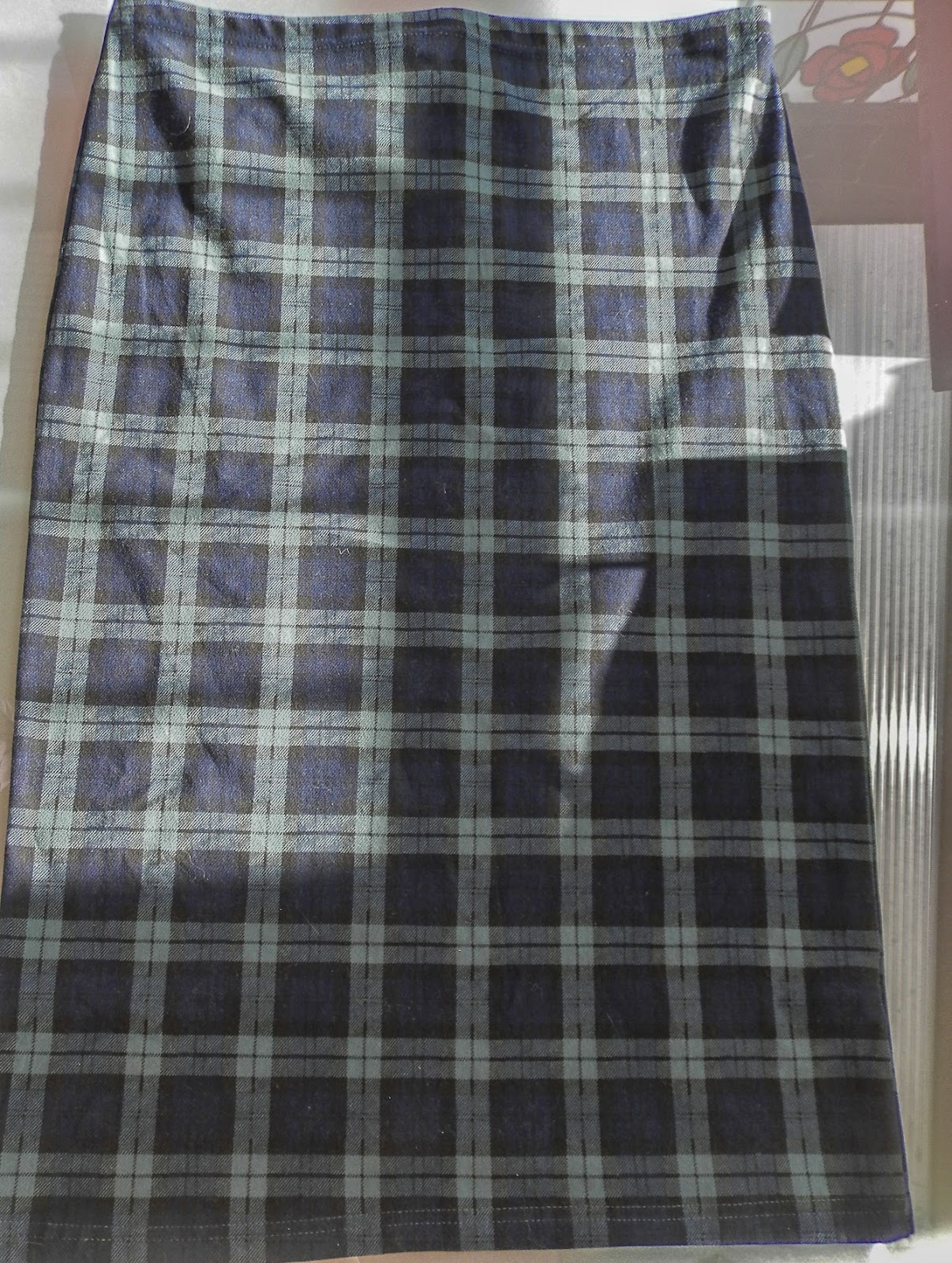 I picked up a red tartan jersey pencil skirt before Christmas and I loved it. Now my favourite colour is green so I couldn't resist getting this green check shirt. 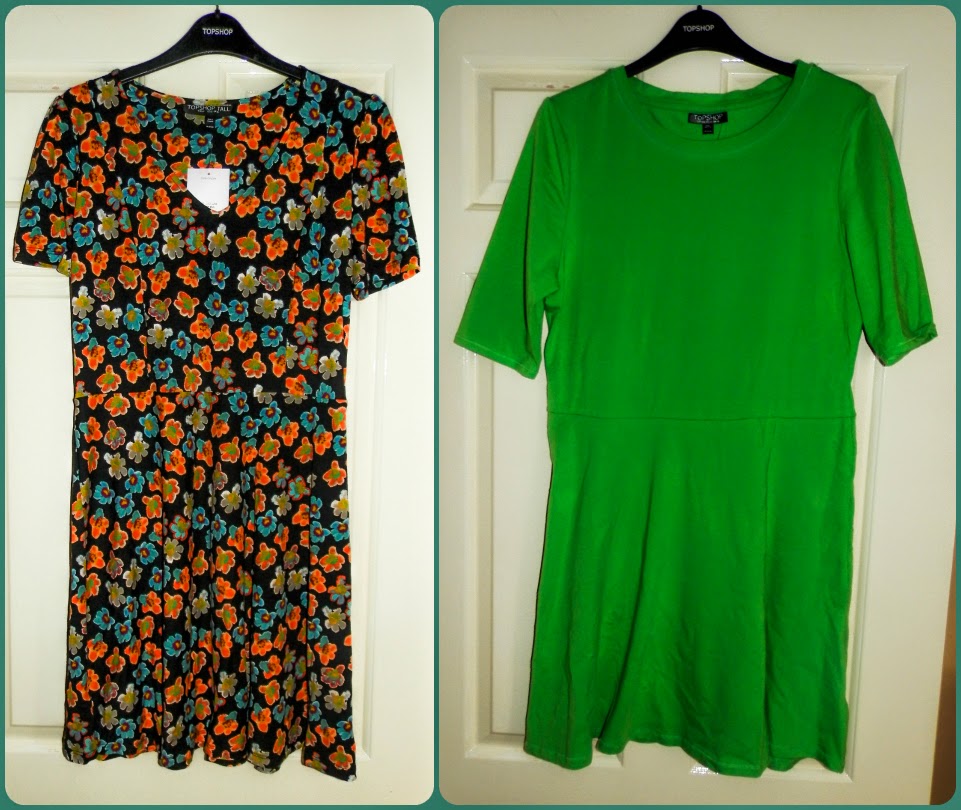 Time for some dresses, I fell in love with this floral dress immediately, it's a beautiful fit, and feels gorgeous on. Plus it's versatile I can either wear this with a cardi and tights in the cooler weather and sandals in warmer weather. Next up this green t-shirt dress, as mentioned before green is my favourite colour so the colour attracted me. When I realised it was a gorgeous t-shirt style but beautifully fitted dress I snapped it up. Another plus is that the arms are really quite long, elbow length, I keep saying I'll have to pick up another in a different colour but money has to be funnelled elsewhere for a while. 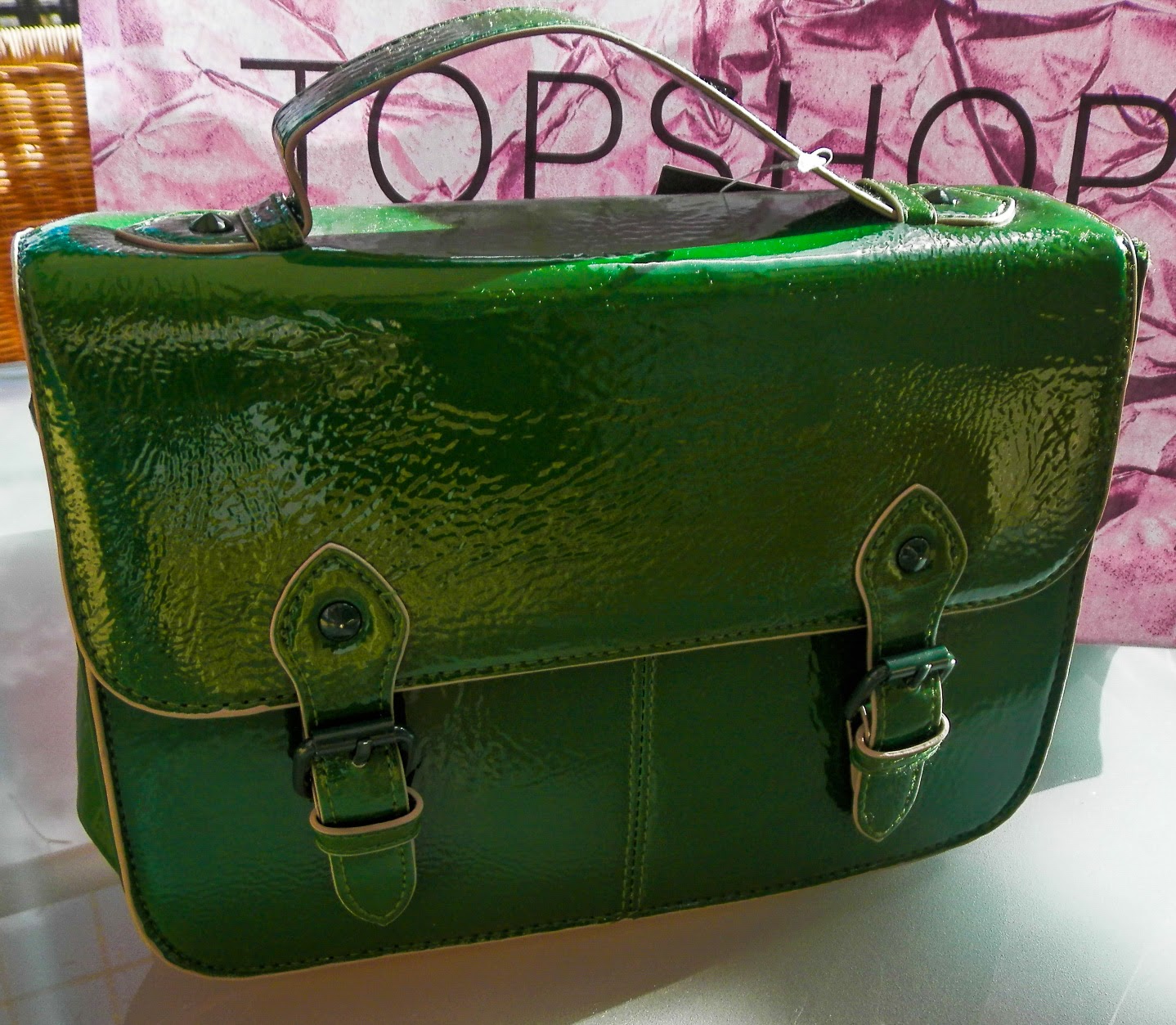 Two things attracted me with this vinyl edge satchel, you can guess the first one, the colour green and secondly this is polyurethane so no leather involved AND a bargain at £20! 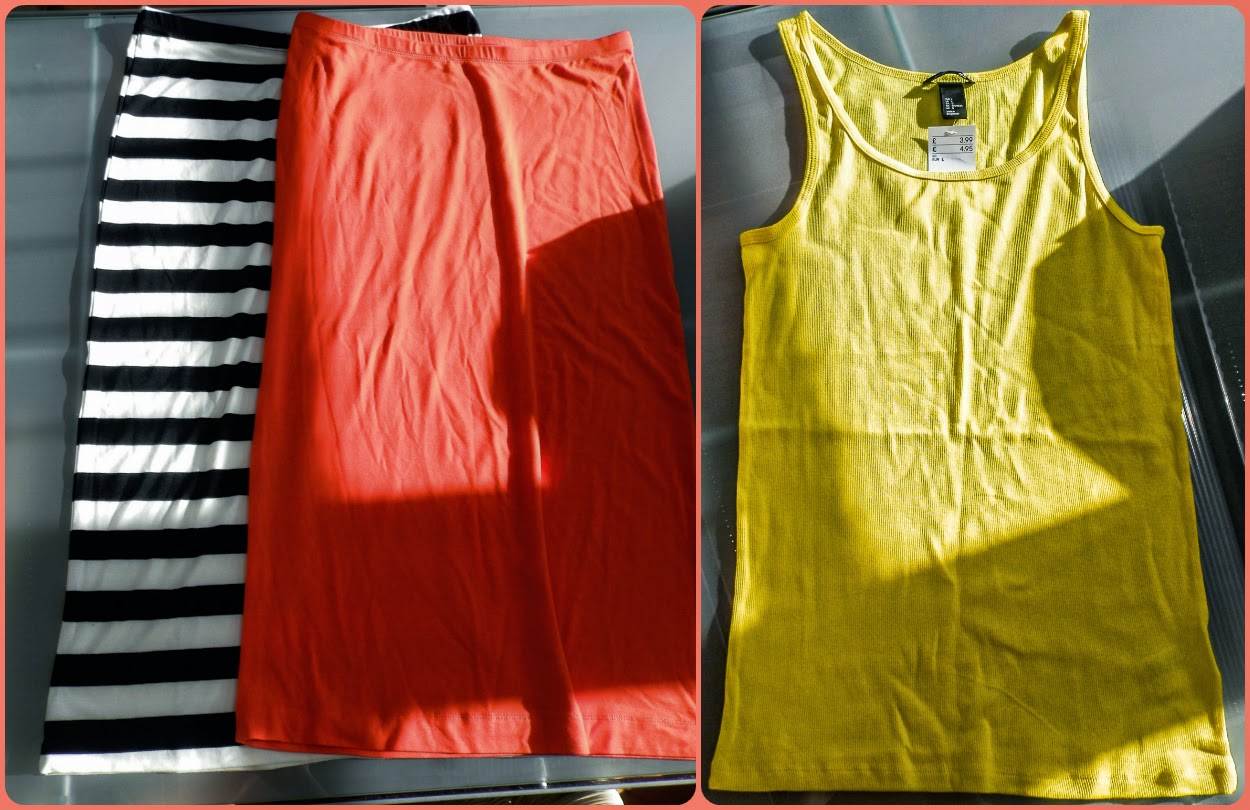 We moved on for a whirlwind trip around the H&M in the Arndale Centre. I was very good, I picked up a few basic items. Two jersey pencil skirts, £7.99 each - I'd bought a grey one last year and I've worn it over and over. I couldn't resist the striped one and decided to go for an orange to add a splash more colour to my wardrobe which was the same reasoning behind this £3.99 vest top. I also picked up a basic sweatshirt which I haven't photographed. 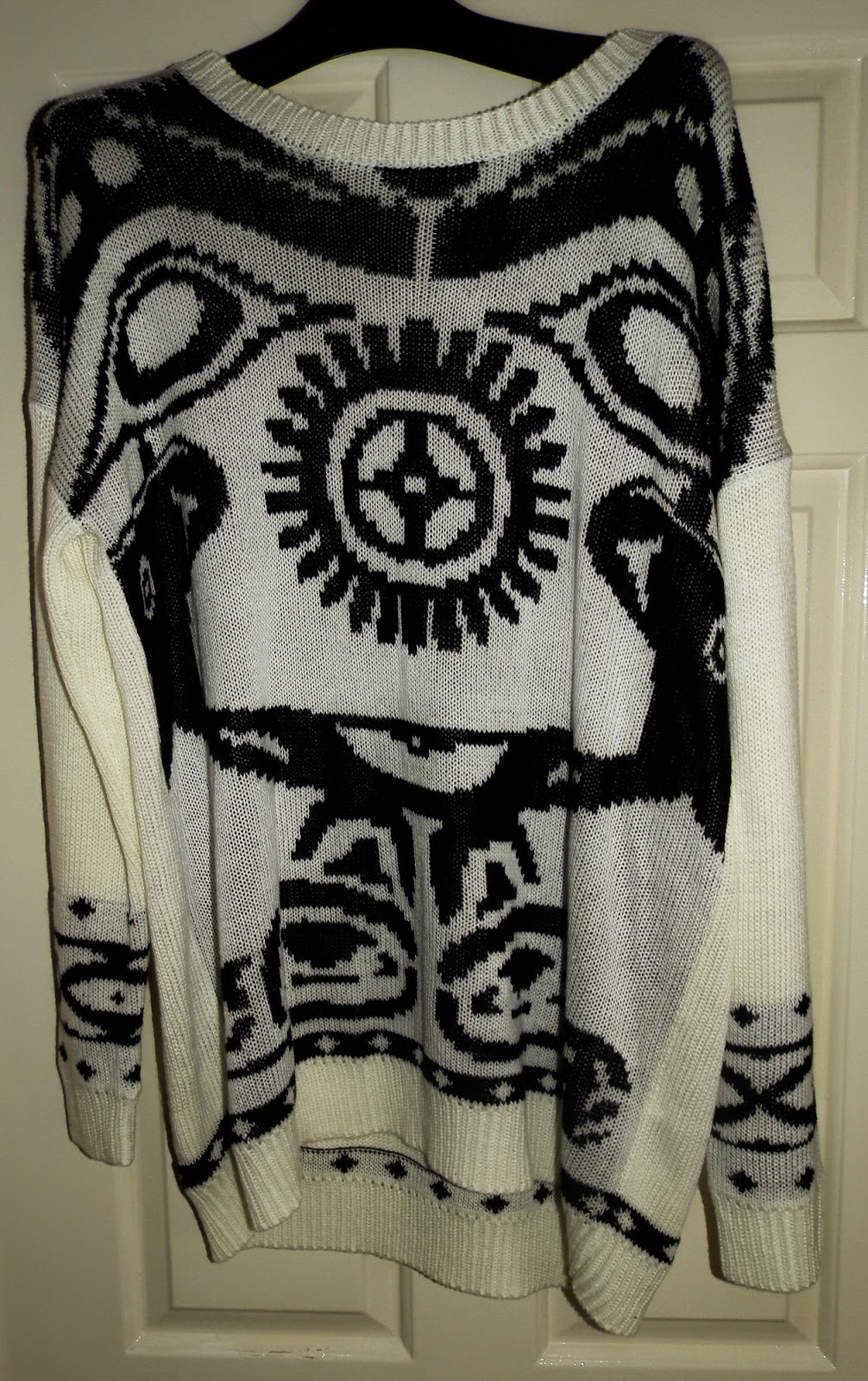 Last up (excluding the dvds I picked up from Fopp) we went to Urban Outfitters but I didn't get anything. Although I did, I saw this gorgeous Minkpink Personality Crisis jumper but I didn't pick it up, regretted it immediately and ordered it as soon as we were back home - along with a new throw for the bed. I was over the moon when it arrived the next day. I asked James to hang it up for me, he washed it instead which is why it looks so heavy in the photo above. It's such a gorgeous jumper, everyone has complimented me on it. I definitely think I need more Minkpink in my life.

That's it for my shopping trip. I rarely go on proper shopping trips, I think I have been on three in the last two years although I haven't been for years before then.
Posted by Unknown at 16:09