Now I mentioned that I'd cancelled my Glossybox to move to another subscription box but I didn't point out what it was and also that really it wasn't for me although I'd be the one receiving it. I'd been interested in getting a cat subscription box for a while but as The Beast was so old and sick I was worried he wouldn't make it for his first box so I left it. Of course we adopted another cat quite soon after so I decided to go ahead and subscribe once he'd been out a few times and found his way home!

I decided to go with Cat Hampurr, once I set up a subscription I couldn't wait for it to arrive but as I subscribed two days after the cut off date we had to wait. I love spoiling him and discovering new products so this was a perfect combination of both. 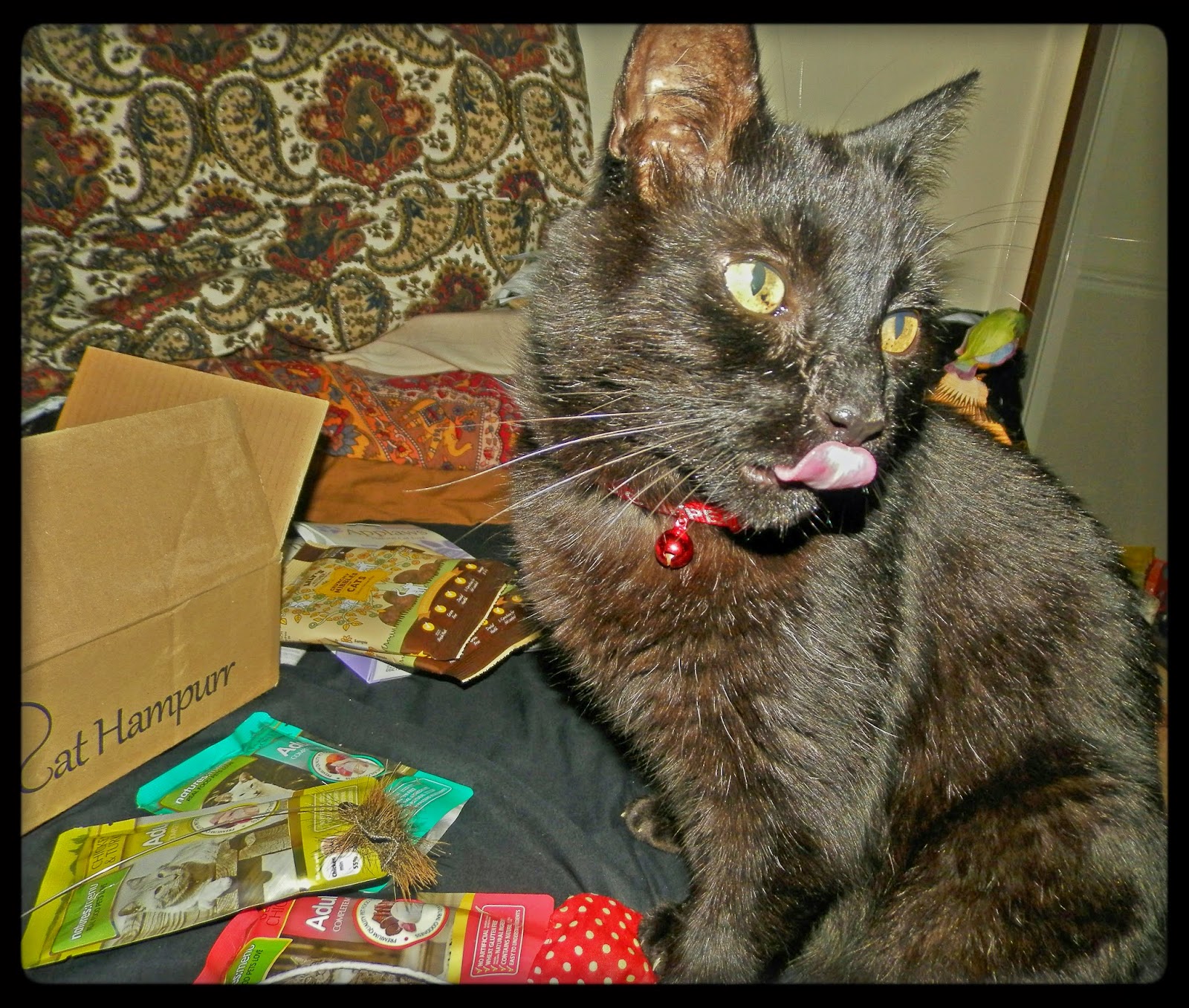 Now I won't bother with the cut as I'm sure this won't spoil it for any cats. He was super excited with the box, waiting patiently for me to unwrap the tissue paper before fishing things out, so what did he get?


This first box was very successful. Samhain went from waiting patiently to rocking back and forth from paw to paw before reaching into the box and pulling out the mini tiger teaser, that was the first hit. We've had a few plays with this since, the small size makes it perfect to keep in our bedroom when he wants a little play just before bed. 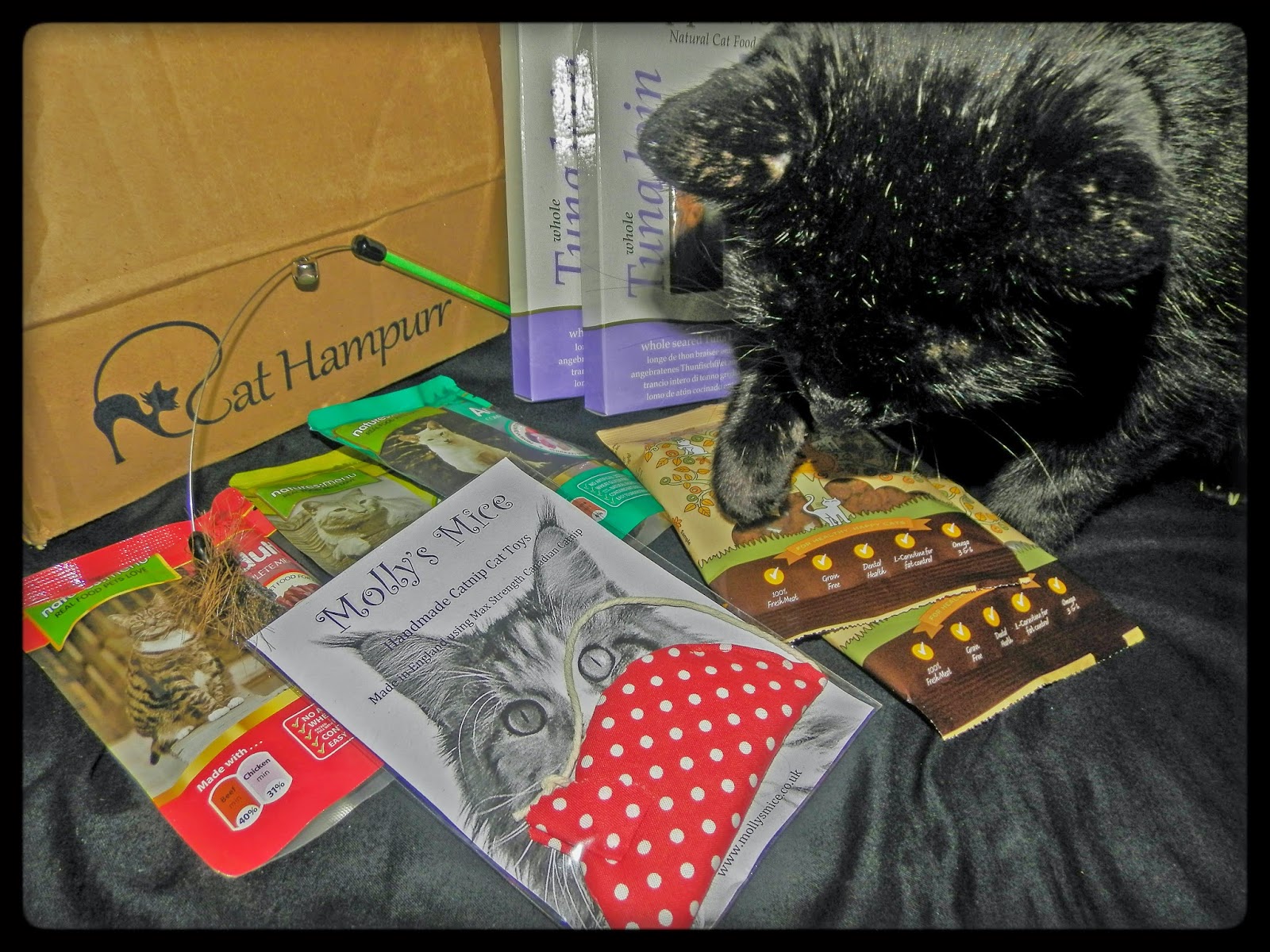 So here is everything laid out, Samhain was very interested in everything!

He was very quickly distracted, he caught a whiff of the catnip mouse, that was it, he was gone. I opened it for him and he spent the next half an hour licking it to death, waving it around so that he could track it, claw at it but mainly licking it! 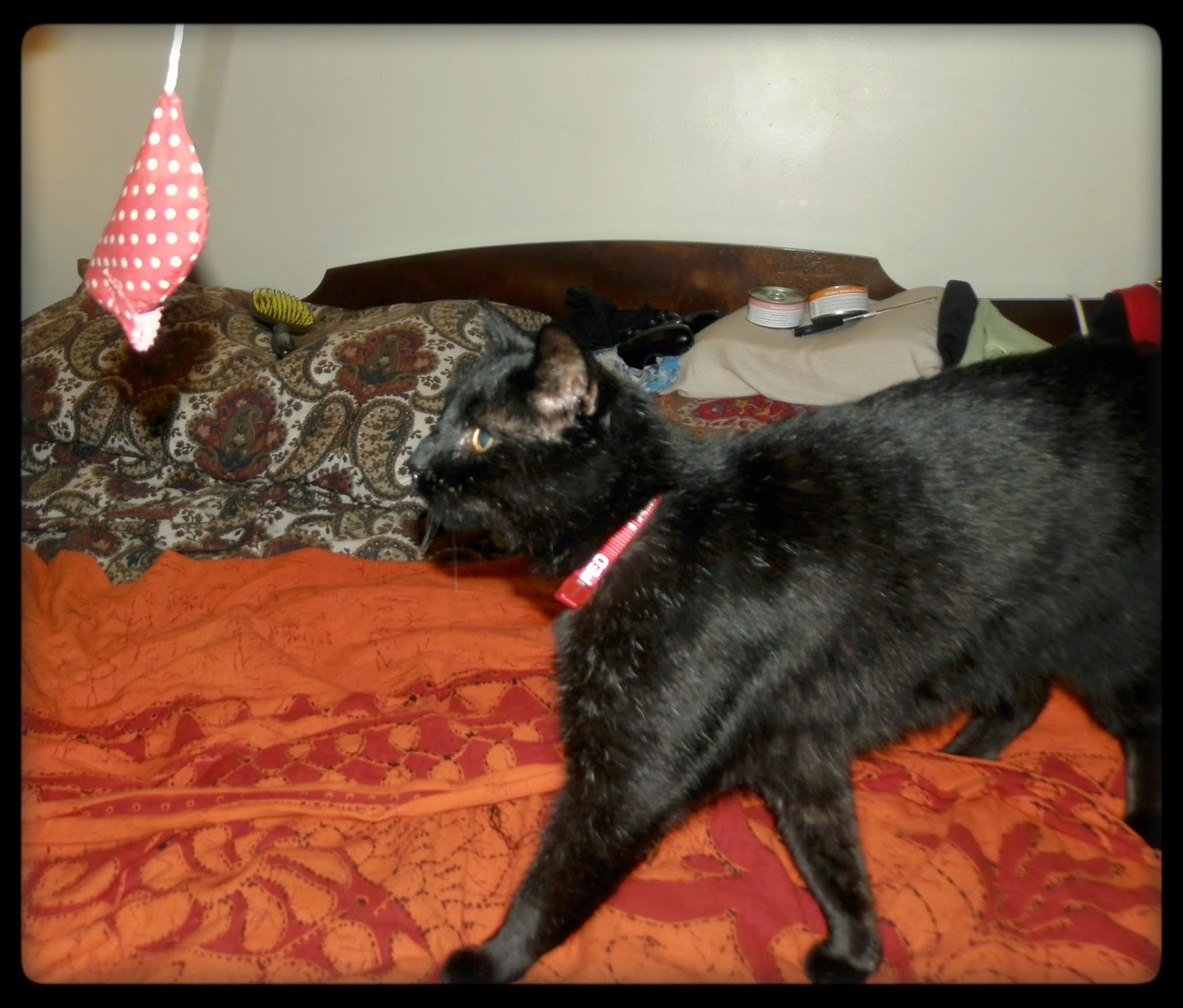 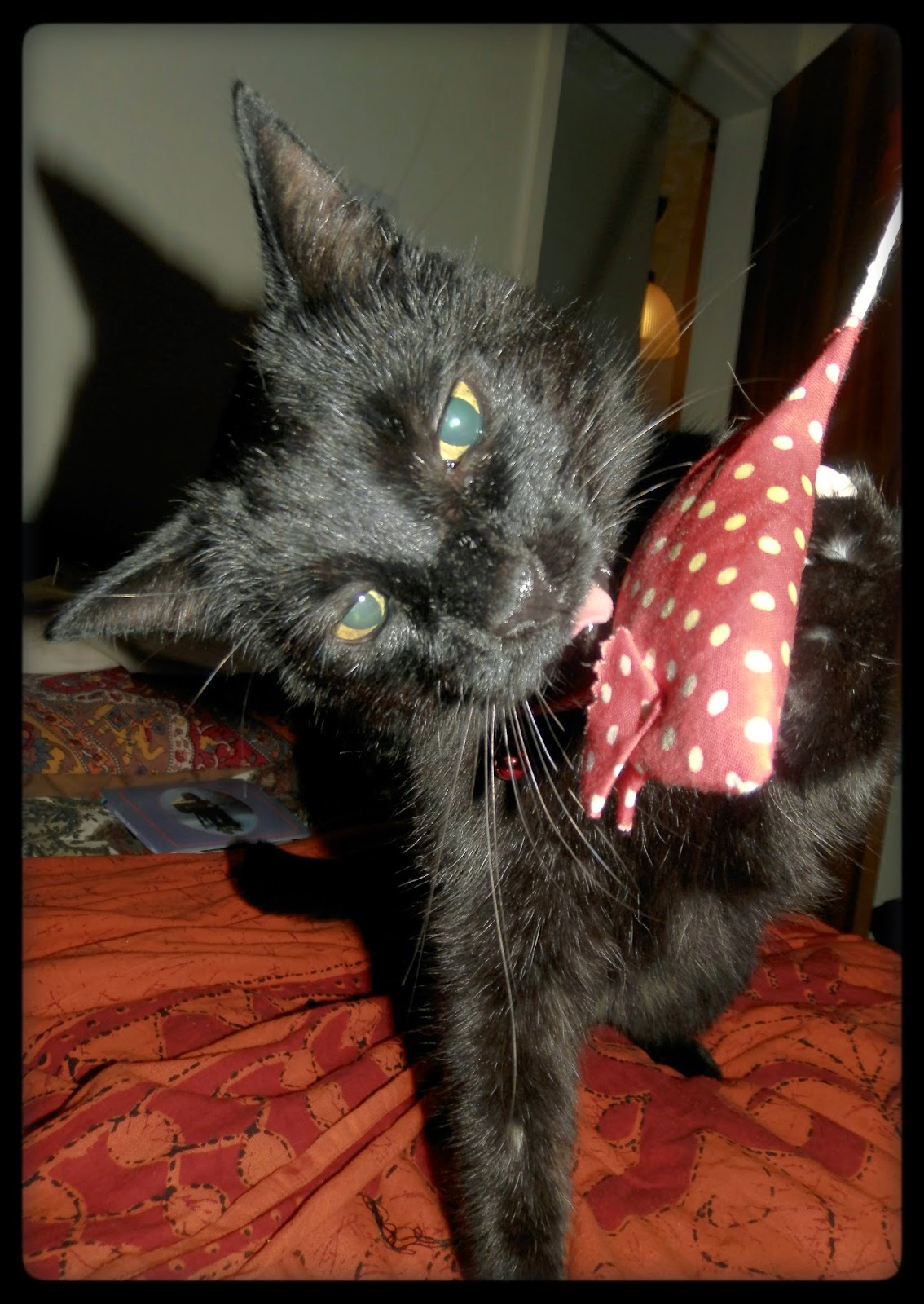 At one point he managed to lick it off the bed - he tried to catch it on the way down bless him, he had such a panicked look on his face (see photos below). I'll be picking up at least four more of these to keep him occupied. He loves leaping for it, stretching up for it just so he can lick it.

I wasn't sure he would go for the Applaws tuna loin, he's much more fussy with fresh fish (but loves fishy biscuits) than he is poultry and meat - he adores the Applaws chicken and mango but the fish stuff he just doesn't go for (apart from the Ocean Fish Pate - he loves that). We're trying to get him to have better quality fish more often and I have to admit that if I'd seen this in a shop I would have bought it for him to try anyway. I was pleasantly surprised to find that he was actually quite taken by the tuna loin having had it for a snack Friday night. If they sell these locally I'll end up picking some more for him. 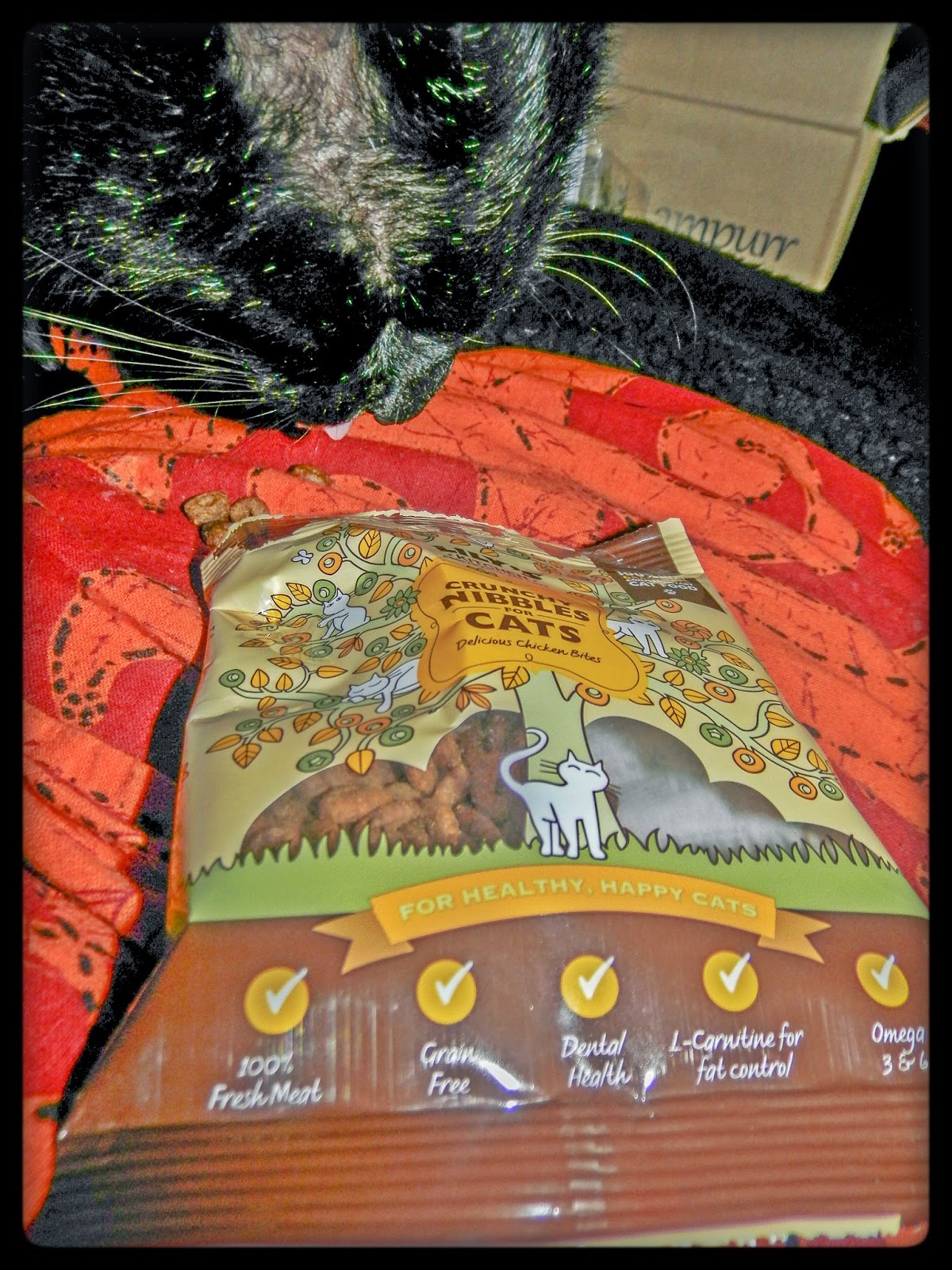 An item I was pleased to see was the Lily's Kitchen chicken crunchy nibbles - we have the fish ones which he does love and we also feed him a lot of the Lily's Kitchen wet food. I'd wanted to try these nibbles for him but as we're snowed under with biscuits I knew I had to wait. So it's nice to know his opinion on them - he loves them, I fed him a few out of my hand and I ended up covered in hot excitable spit - he even fished a few more out of the packet!

Now I have yet to try him on the Natures Menu wet food but I'm going to give him one for his meal tonight. This is another brand I like the look of but have been waiting to work through the food we do have. We received three flavours to try, Beef & Chicken, Chicken with Salmon & Tuna and Chicken & Turkey - having a few different flavours will really help us judge whether this brand is for Samhain. I love the fact that they use good quality ingredients - this is something I strive for when it comes to feeding Samhain, I want to keep it simple, natural, good quality, nothing artificial as much as possible and, more importantly, what he enjoys. Natures: Menu fits with most of this ethos so now it's just up to Samhain on the final point.


At £15.90 per month (including postage) it's a good chunk of money but if, like me, you love to spoil your furry companions and also want to discover new products then this is perfect. For the quality of the goods included the box is really a bargain.
Posted by Unknown at 19:10