The Downfalls of Moving Back Home

I'll start with a bit of background to this post. I moved back in with my parents 2 years ago, so did my partner. There were a number of reasons for this, one of which were nightmare neighbours, the flat we lived in was quite old and wasn't very soundproof but they were also extra noisy. They were constantly fighting including a plate of chips being thrown by one of them (the evidence was left in the shared yard), music played loud enough so that it could be heard three rooms away, a dog they couldn't control, video games full volume at 3am on a work night and police raids in the early hours of the morning, the council were useless at helping us so we left before I lost the plot - I later heard that he had gone to prison.

On top of that we realised that renting meant we would never have a place of our own, we had a little debt to pay off too so moving in with my parents meant we could increase the payment there and start to save, something we are still doing.

So I should at least mention the main plus points. I love my parents, I generally get on with them so it isn't a difficult situation. My partner is also very supportive, he doesn't mind living here and gets on with my parents. It's also very cheap. We pay something towards the bills but we don't have rent to pay.

It has also came with an unexpected but handy bonus. I'd been having dizzy spells for months when I was in the flat so had visited my GP. One of the things they discovered was a tumour in my kidney, fortunately it turned out to be benign. I had a procedure in December 2011 to stop it growing, from 2010 to 2011 it had gone from 5.5cm to 7cm, after the procedure I was bed-bound for quite a while, my partner works full time so having my Mum and Dad around really helped. My health improved but have since worsened and I'm currently awaiting an operation, I'm off work as I can barely get around without heavy pain relief medication so again having my parents around really helps and means James doesn't need to take time off work to look after me. 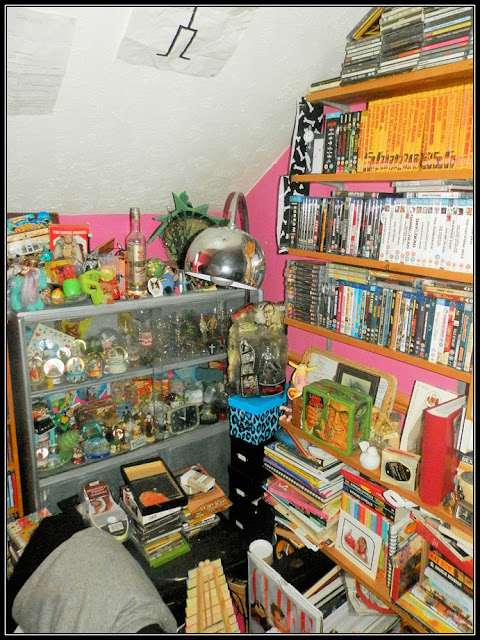 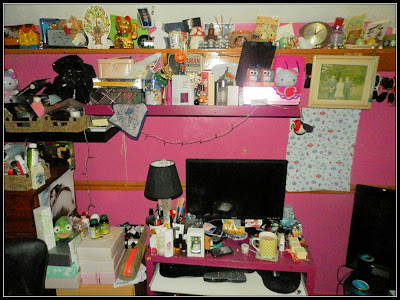 Now the photos above with give you an idea of the problem. I was heading towards being 30 when I moved back, I had lived in only two flats before but had obtained a few bits of furniture along with a load of kitchen equipment. On top of that I'm a hoarder, a hoarder that will never get rid of things I truly love. I'm a savvy shopper, I love charity shops, car boot sales, any sale, I look for discount codes, collect reward cards and makes sure I get cashback where I can. When I buy clothes I buy them because I'll love them forever not just for one season so I find it hard to get rid of clothes as my photos will show. 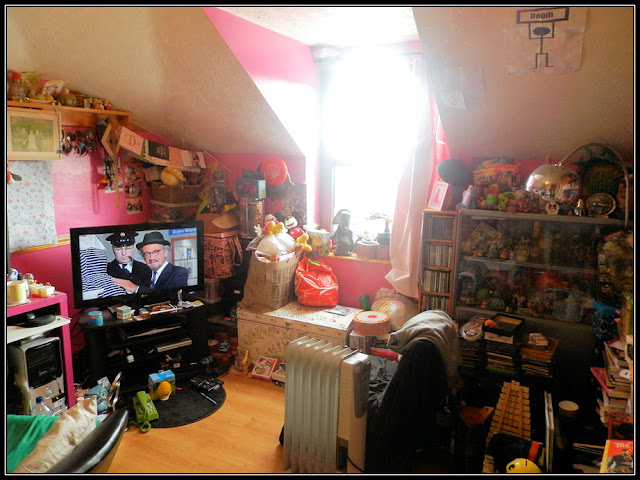 We are fortunate to have two rooms, the room you see in the photos is the equivalent of our lounge. I have my collections around, toiletries piled up and clothes in boxes outside the wardrobe as well as in the other room. One wardrobe was broken last December and I have only managed to recover the clothes that really can't be crumpled on the wardrobe floor. I really don't know what to do there, I don't dare getting a new wardrobe as I'm worried about the weight in the room, these wardrobe are cheap and flimsy, I want to replace them with something decent but that will also be weighty, I can't risk it. At the moment the top of the wardrobe is used to store other stuff and the doors are used to hang clothes on. 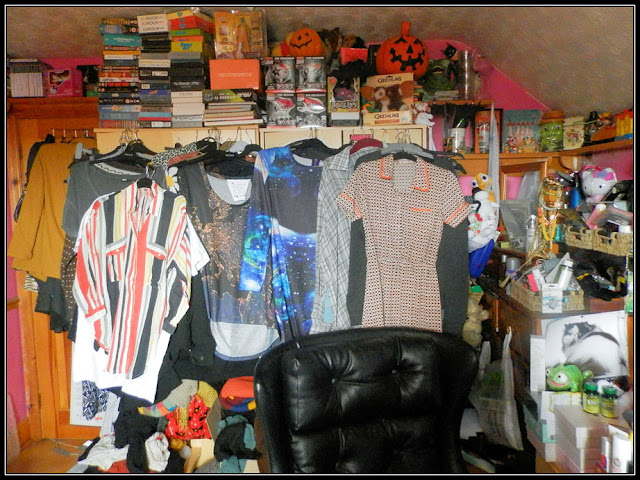 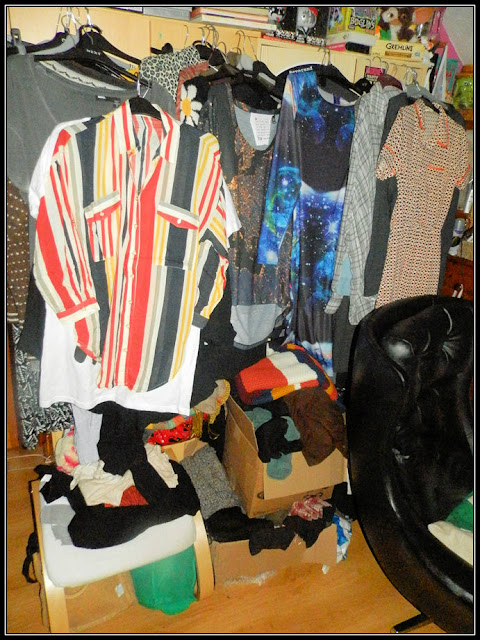 As I can't get about much at the moment it is down to my partner to tidy up, I think it's becoming a bit of a nightmare for him. I'm naturally quite messy where he is super tidy. However, I'm very organised. Being messy but organised may seem like an oxymoron but I've always being obsessed with having things in alphabetical order, colour order, collection order. I'm messy but I know where things are, I always put things away logically whereas James tends to just put things away, he then can't find anything. I believe his way leads to things getting messy in the first place. Also you find that when you can't bend down things fall to the floor, all the time.

When we moved in I did get rid of many items, about a quarter of what I own. Quite a few clothes I sacrificed, along with books, although I only got rid of books that I had two copies of. I can't see anything else going although my mother who herself has 7 wardrobes, 4 chest of drawers and 3 beds with drawers underneath full of clothes keeps asking me to get rid of more. We've hidden our vinyl under the stairs to make room and also with the aim of removing some of the weight in this room. I have a few boxes of clothes in the other room too, there is only a small space down one side of the bed for us to get in. At the moment I'm just daydreaming about having a house with a box room for me to turn into a library. 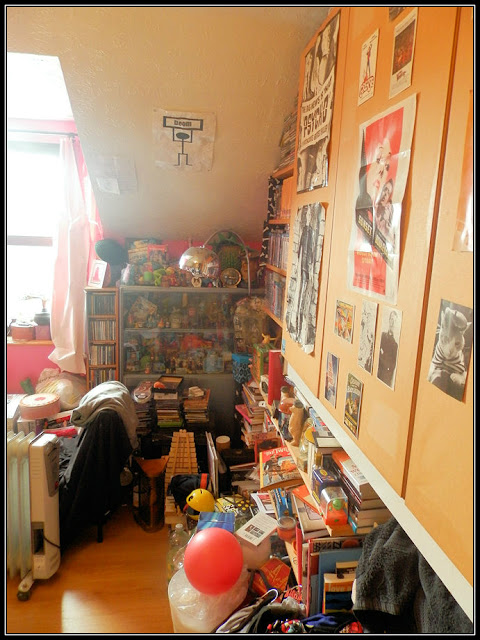 And in case you were wondering what is behind the cupboard doors..... 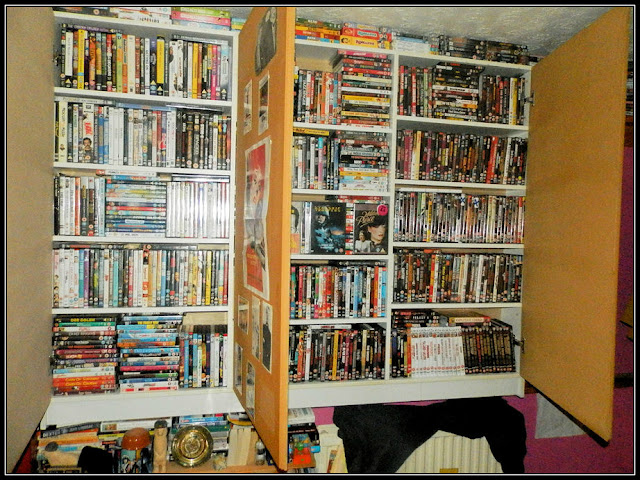 More DVDs! All of which I have catalogued online....I told you I was organised!
Posted by Unknown at 15:09