This week felt like it went better, I was slightly more positive and made the effort to do more exercise. My daytime diet is getting better, I'm enjoying the change with my breakfast, granola, yoghurt and fruit in the week instead of toast. I find it more filling and healthier, I'm quite smug about it really, lunch is still durum wheat, carrots and cucumber I usually have a little something else with it a long as some fruit but it varies day to day. My tea also varies, I've been eating a little later again but want to get on top of early teatime again - and possibly moving to lighter meals rather than cooking something from scratch. 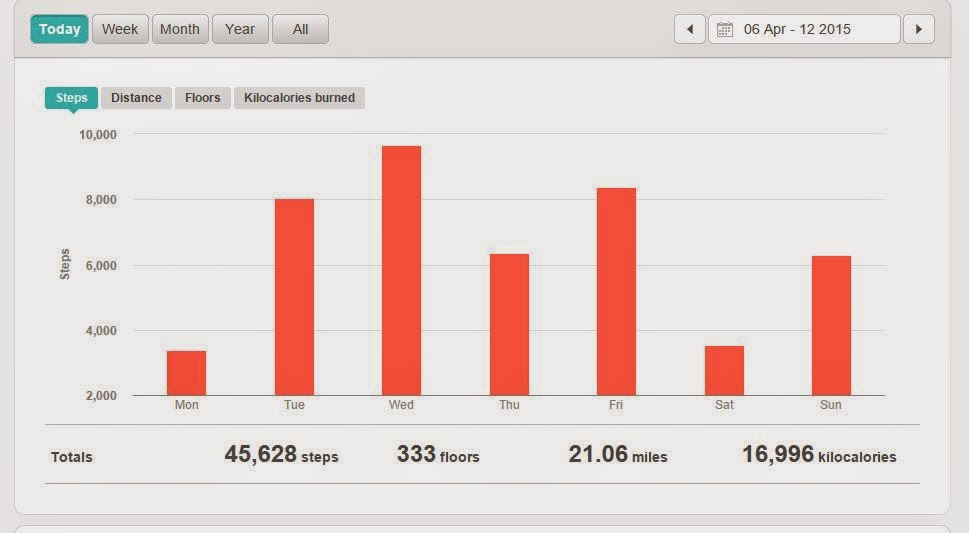 Now my steps appear to be down from last week but they are actually slightly up - but I cocked up which I'll explain in a second. I'm really hoping to get my steps up by quite a bit this week rather than the slow crawl upwards I've been doing recently - a normal working week will help!

I made the effort to do a bit more exercise favouring getting back on the cross trainer again, I planned to do twenty minutes but in the first few minutes I realised how out of practice I was with using the cross trainer so thought I'd give in at ten minutes, however, by the time I was getting close to ten minutes I was starting to feel a bit more energetic so soldiered on for twenty minutes - at about the fifteen minute mark I realised I hadn't moved my fitbit to my sports bra! Very annoying - this is why my steps appear to be slightly down this week!

I'm still feeling positive, adjusting to the small changes is easy. I'm just hoping to get more steps and more exercise in this week - hopefully the weather will be dry for the weekend!