Well it was a fantastic week, lot's of progress and positivity. I never did get around to sharing the other upheaval that has changed and will changed loads of things so instead I'll mention it now. I split up with my partner of a number of years over a month ago. We're still friends and as we haven't really been romantic for a couple of years things aren't really changing, except they are, and that takes time to adjust to. He is in the process of looking for a new place and once he does move that will change how I eat quite a bit, but for the better. Now that's off my chest I'll get on with what last week was really like.

Food wise it was all mainly balanced, still some heavier meals in the evening when James and I still have a meal together but nothing overly terrible. So no real change here. 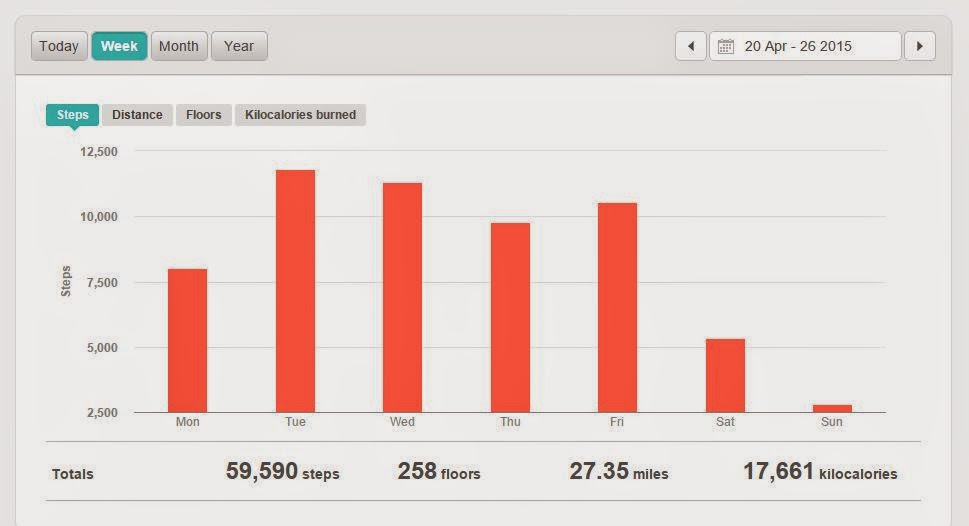 Steps wise I'm on the up, slightly more than the previous week which is still going in the right direction. There was one well below 10,000 in the week but three that were plenty over, I was in at the weekend but I managed to get over 5,000 on the Saturday but just under 3,000 on the Sunday.

Exercise wise I feel nearly fully back in the swing of it. I did a 20 minutes HIIT style dvd a couple of nights along with some weight training. I also did 50 minutes of yoga on Sunday. The next step is being able to do more. I did something else another night but I can't remember what as I haven't logged it anywhere!

Through the break-up there will be some positive changes to my diet and lifestyle, hopefully that will kick in pretty quickly so that I can get one with my life!