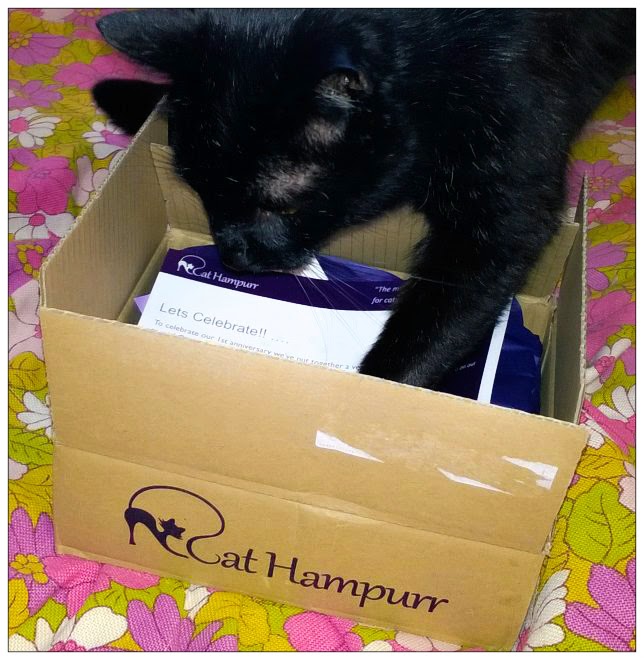 Samhain is having such a crumby month, three visits to the vets in a two week period due to abscesses, he's been shaved, lanced, drained and flushed! He is recovering okay but as we're having to keep him in it's been frustrating for him. Samhain does have some behavioural issues, mainly how he interacts with other cats. This was another issue that left him on the shelf waiting to be adopted, with me he has someone that is patient, caring and understanding so he's doing pretty well. I just wish he wouldn't fight and end up with abscesses! The fighting is becoming less and less unfortunately he has just been a little unlucky with picking up an infection in one of his puncture wounds.

I was so happy that a new Cat Hampurr had arrived for him this weekend as it meant my Sunday in with him would be a lot easier. It also made him happier, once again he loved the contents, it was full of fun and yummy goodies so he had a little play of his new toy, lick of his catnip pillow followed by a snack which left him very satisfied and very sleepy - he spent the afternoon fast asleep rather than trying to go out.

The April box marks 1 year of Cat Hampurr's, to celebrate their anniversary they've put together a box full of their most popular items. It's a great mix, a couple of items are new to me as I've only been subscribing since last September but there have also been a couple of favourites that I can't get around where I am so I'm excited to be able to treat Samhain again.

So what was included?

Fish 4 Cats Complete Dry Food - Rich in Mackerel 400g
A very generous sized bag of biscuits. Samhain has a wet/dry mix diet, two tins of cat food a day along with some biscuits, I like to give him good quality food which may cost a bit more but it's worth it. I'm trying to incorporate more fish in his diet and these biscuits will make it easier as they're 65% fish content. I've put them out for him today and he loves them - I was a bit wary as he is fussier with fish but he doesn't seem to have noticed!

Natures Menu Treats in Chicken & Liver 60g
Samhain has had these before and loved them but unfortunately I can't buy them locally. These are like deli chew sticks except broken into smaller pieces. He really does love these as a treat, hopefully I'll find somewhere nearby that stocks them, even if I have to go to the next town over. Not only does he love them but they're free from artificial colours, preservatives and flavours, they're 95% real meat so even though they're a treat, I hardly feel that they're a guilty pleasure so can easily be worked into his diet.


Applaws Whole Tuna Loin 2 x 30g
Another treat he has had before, loved, but I can't pick up locally - I think I'll have to put faith in having a trip out to the next town over as they have a big pet shop there. Just like the Natures Menu cat treats they aren't something to feel guilty about feeding him, they can simply be part of his normal diet. Now Samhain is a lucky cat as he is fed Applaws wet food daily. I'm really trying to encourage his fish eating and the one thing I can guarantee is he will eat this and it contributes to his daily diet in a good way. I always find on a week where his diet has been fish heavy his coat is shinier and he has a bounce in his step. Samhain loves this treat so much, he ate the whole thing in one sitting - I had considered saving some for later but every time I put it away Samhain would tap my hand signalling he wanted more. The one downside is I opened it on my bed, now I laid a makeshift picnic blanket but on opening I managed to squirt some of the broth on my bed, not such a nice smell for me to have to deal with but I'll put up with it for Samhain to be happy!

Eco Kitty Limited Edition Cat Hampurr Hand-crafter Organic Catnip Pillow
Samhain doesn't understand what limited edition means but I'm pretty happy for him to have something this special. He is a true catnip connoisseur and has given this his seal of approval. It was the first thing he wanted to look at and has now, licked it, rubbed it and slept on it. This led to a truly blissed out afternoon for him, snoring away on my bed it also meant he didn't miss going out today giving him a chance to heal without stressing. 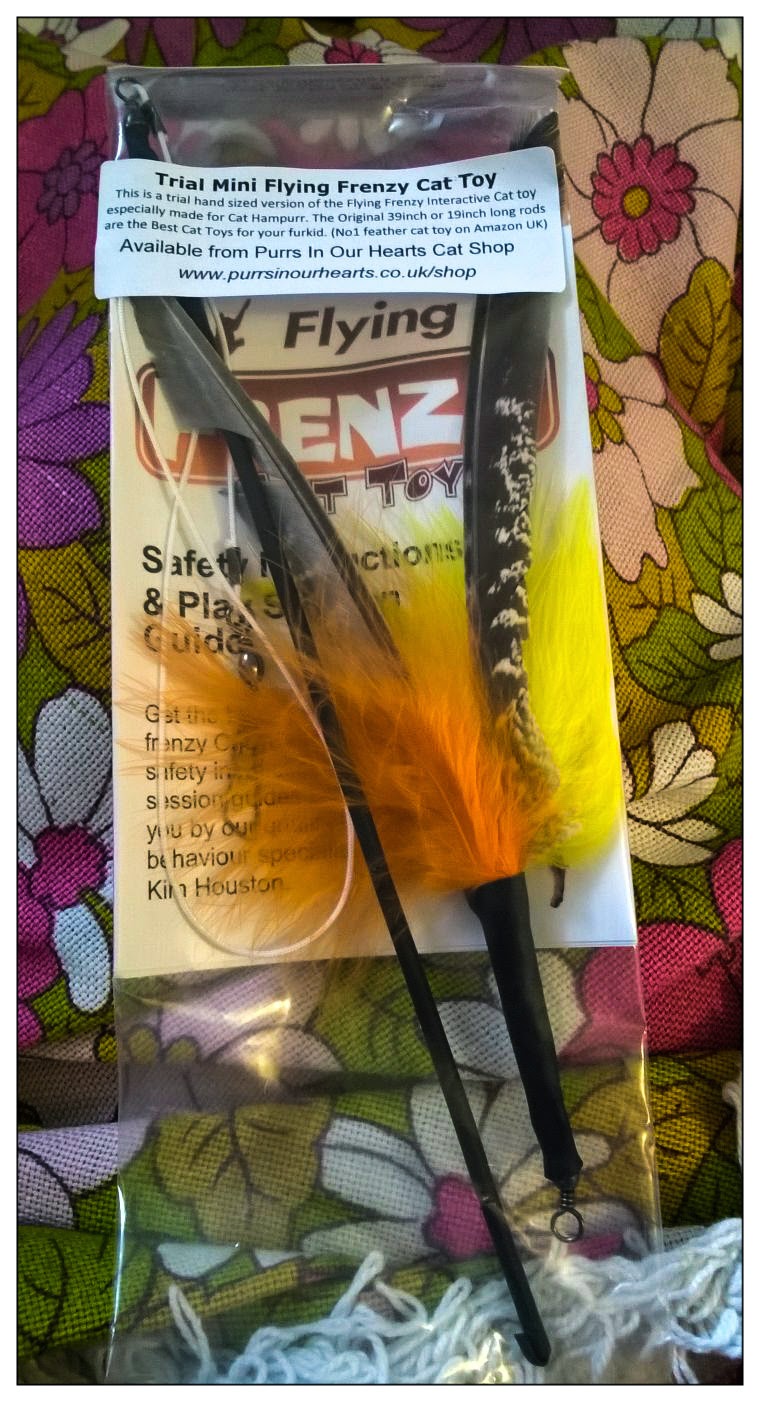 Flying Frenzy Limited Edition Cat Hampurr Special Flying Frenzy Short Wand
This is another limited edition especially made for Cat Hampurr, it's a smaller trial version - similar to the sort wand. It works quite well as I can catapult the feathers which makes Samhain go wild pulling them down. Although Samhain's age is estimated to be around 10 he just loves to play and I always want new toys to add to the mix, he is completely spoilt rotten. The toy itself is incredibly sturdy, the hook and the cord used are really made to be played with, this means we should get quite a few months of rough and tumble with it before any wear starts to show, if at all!


So Happy Anniversary Cat Hampurr - Hopefully this time next year I'll be doing a 2nd Anniversary post - I just hope Samhain keeps out of trouble for that long as I'm sure Cat Hampurr will be thriving!
Posted by Unknown at 19:36