It's been such a busy week with this and that, I haven't managed to blog much but I have managed to do a little more. I'll start with the steps as I've done so well. 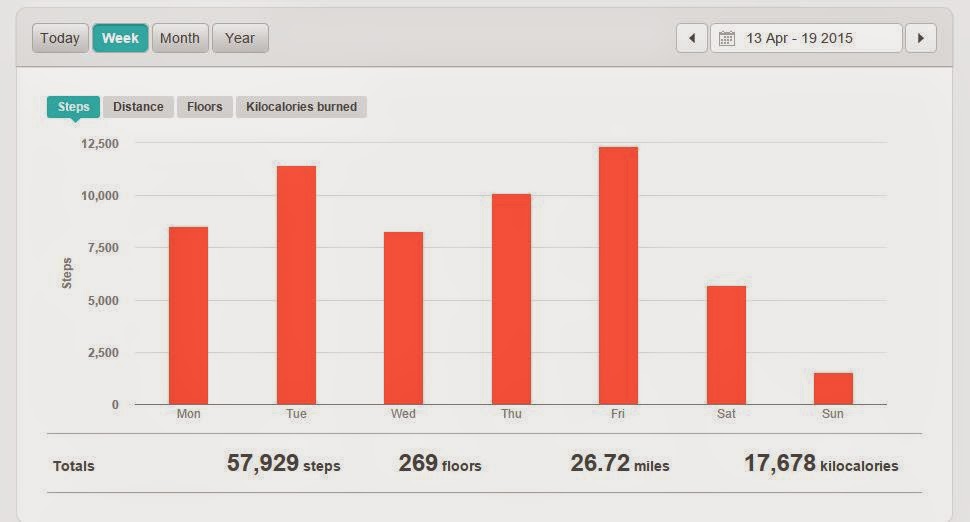 I managed to hit over 10,000 steps on three occasions, two by quite a lot more. I'd like to get my five day working week up to 10,000 steps, I know on average I met them but I want a bit more consistency. The weekend started well, I was out with a friend on Saturday doing shopping (I'll be posting about this at the weekend) so I managed to do more than I usually would but on Sunday I just didn't have the energy, even after 12 hours sleep!

I'm hoping to keep my steps up this week as much as possible. The only thing that can put a dampener on this is my dad. Only because he is gradually having more home visits so this could distract me. I'm looking to getting a recumbent bike. This would be something dad could use, if we can encourage him enough, but I'll also be able to use it while I'm sat with him. My steps might not be up but at least I could do some form of exercise that doesn't include using the dvd player (as dad will be watching what he wants when he wants) and that I can do for a long period of time.

I'm also due a week off so my steps will go down then but I will aim just to keep active but also have a proper rest at home/holiday, as much as I can.

Food wise has been okay, still loving the yoghurt, granola, blueberries breakfast during the week. I still haven't got on top of my evening meals in the week but that will gradually become easier, for reasons I may have to mention in another post at some point.

I almost forgot, I did also do more activity. I love The Firm exercise DVDs but haven't done them for a while but I stuck one on this week. I was a bit out of practice but I really enjoyed it and can't wait to get back into a routine with them, they're hard work but so much fun!

I just hope this week is a little better than this week, or at least not worse! I hope everyone else is reaching their goals!