Well this isn't my usual, positive weekly weigh-in post but this is something I feel strongly about and fancied a bit of a end of week rant. When I call this a diet rant I'm not talking about being frustrated about being on a diet - I'm talking about the idea of diets full stop. 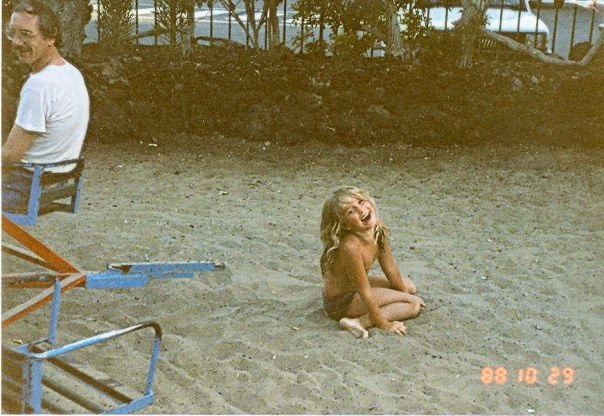 Now this is an issue close to my heart, I have eating disorders, I can't even fully say that I'm over them but I'm getting there. Having been a normal sized child (see above - I will never be that happy and confident in a bikini again) slightly chunky but not completely overweight but tall and conspicuous teen, to a starving girl in her early twenties to being completely overweight late twenties I've been at all sides. Now I've made progress - I've lost over 50lbs these last two years but that isn't the progress, the progress is how I now approach food.

I'm sure a lot of women (and some men) have had or still have the view I used to. Certain things were bad, others good and the bad stuff could never be eaten. If you did eat the fatty chocolate, crisps, pizza or chips then the fat contained in the food was immediately converted to fat on your body. To lose weight then you could never eat these evil foods. I've been made to feel guilty and had developed a weird relationship with food. At the height of my starvation diet I would eat as little as 600 calories a day (I'm 5'10"), if I was eating that day at all. When I did make a meal if I accidentally spilled some, or dropped an ingredient I was convinced this was because I was daring to eat at all and would instead bin it.

Unsurprisingly after a couple of years like this my illness spiralled even more out of control but as I was still in what would be considered a healthy bmi, albeit at the lower end, after being dragged to the doctors due to exhaustion I was diagnosed Chronic Fatigue Syndrome and spent months recovering, eating a little more, but not much, around 1000 calories. I started to gain weight, something I couldn't deal with emotionally and spent years yo-yo dieting - by the week, I would eat little Sunday to Thursday and binge at the weekend. My weight went up and when I became ill with what at the time was a mystery illness (found to be a tumour in my kidney and cysts on my ovaries - double findings during tests!) it shot up.

At this point I felt like something was wrong with me and it was unfair. After having my tumour embolised I found myself stuck at home recovering, I had to get my body up and running again and I spent most of my time sorting myself out, The first thing I did was join My Fitness Pal - I wanted to see how much I was eating (or as little as it turned out) I then set about to increase my calories although I decreased my portion size I started eating more than I had for years AND I started to exercise, slowly I started to lose weight. Unfortunately my tumour became more and more uncomfortable so I ended up having surgery last summer to remove it and half a kidney. We're now a year later and I am more physical than I have been in a long time. Now I'm getting better now but I wanted to talk about what it took to get my head around things.


Now as I've been a vegetarian for a while I didn't really go for diet schemes but this hasn't stopped me from being annoyed by them. First I'd like to clear up that when I say diet schemes I don't quite mean Weight Watchers or Slimming World - these groups offer support not fad diets although I do think the points schemes are just simplified ways of counting calories plus I don't agree with "free" fruit and veg - it all adds up.

What I'm really talking about are the sort of fad diets that eliminates certain groups, colour codes your food or even worse, only allows you to eat a handful of things although nothing could be as bad as the recent rise of the 5:2 diet. All of these will work initially but they aren't sustainable, plus at the end of it you will more than likely gain it all back. The problem is eating a little less and moving a little more doesn't make money. Most of them are just tricking you into cutting calories severely to guarantee a loss but it will come back and then you'll do the diet again, each time it will get harder - something covered in the article I link to at the bottom.

The diet industry IS an industry, it is there to make money so why would it want to lose a customer? Okay, I like my fitness DVD's but I don't subscribe to any special way of eating, I make sure I eat a little less but not too little, this is very important - I also now love to exercise.

I also feel that us women are pitted against each other, we all bitch about one and other, criticise how someone looks and it has such a negative impact. Growing up I was well aware that there was a perfect size (back in the 80's it was a UK 12 according to my mother) this was somehow viewed as important. I do think we need to stop criticising each other, maybe then we will be less harsh on ourselves. Magazines are full of negative stories on celebrity bodies which we are expected to compare ourselves too - it just needs to stop and we need to support one and other.

I'd like to end this rant by linking to an interesting article entitled 6 Tips to Perfect Your Diet it contains a lot of interesting information, some you may know some you may have never even thought about. As I've said previously I want to reclaim the word diet, it's now used when talking about cutting calories for a set period of time to lose weight quickly but I want to use it to mean daily nutrition.

Now I know we all have different issues and we're free to try what we want but it would be nice to live in a world where the ultimate aim was health rather than to be thin.