Last week I felt incredibly rotten and to be honest I've been feeling slightly queasy all week but I haven't let it get in the way. I was lucky enough to be off work until Wednesday and took the opportunity to get out for a little walk on Tuesday. Now it was with my dad who is soon to be 68 so we didn't go too far but we did manage 3 miles!

Now I was tired after this but it left me more determined to get out for another walk. The spot we had gone to was only  few miles up the road and gorgeous, Goyt Valley, I used to go down a lot as a kid and keep meaning to but as I don't drive it's a bit of a hike just to get down there but dad offered to drive us. Now there are two reservoirs to walk around, the ruins of Errwood Hall and miles and miles of nature. We didn't manage to make it to the ruins as we instead went on a major hike in search of the only working toilet (James had forgotten to pack tissues) but we did manage 6 miles which I'm pretty proud of and around 14,000 steps.

This has left this weeks fitbit chart looking a bit odd; 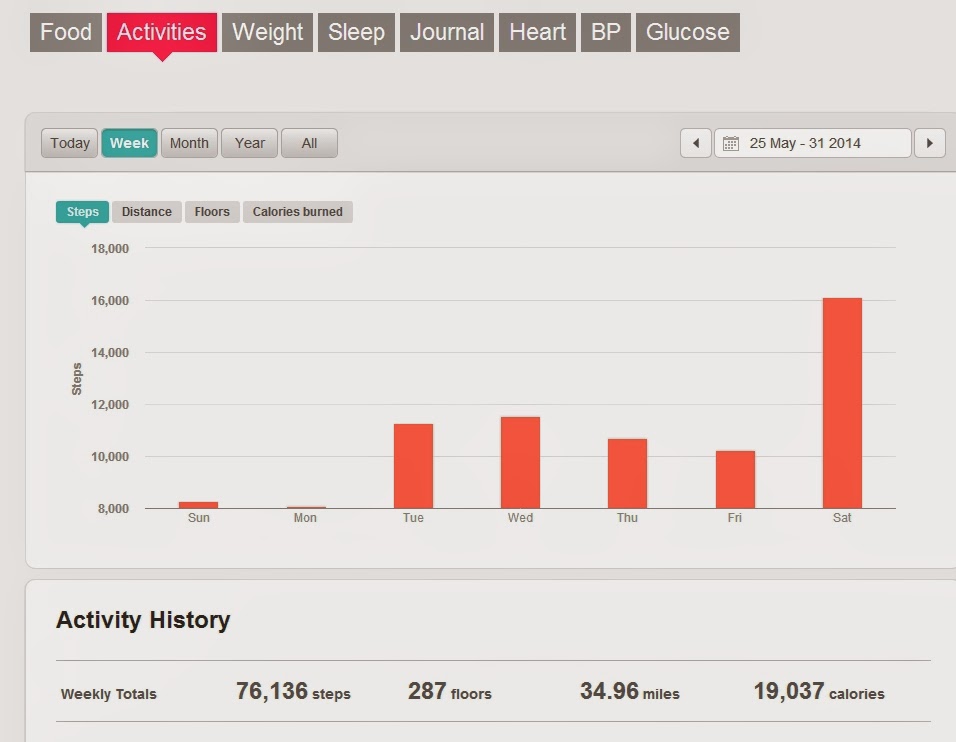 So a poor start to the week (I'm also typing this Saturday evening which is why last Sunday is included) but hitting quite a bit over 10,000 Monday - Thursday, Friday I only managed just over 10,000 as I had to nip back to work to do some more work! So I didn't get my walk home but still over, and Saturday, well you know about Saturday - I still have a few hours to go too!

My exercise doesn't look much for this week but I didn't log the walking in my MFP record on both the Tuesday and Saturday as I just use my fitbit to count steps.

Food wise I've also been pretty good, nothing too overboard although I am looking to cut my calories slightly, I don't usually eat all of my exercise calories back but I want to cut that down even more, only slightly, aiming to eat 1,700 calories a day - currently with exercise plus fitbit additions I'm usually allowed around 2,000 but eat between 1,800 - 1,950. To do this I just plan to decrease my carb portion with my evening meal and a little less snacking in the evening.

Next week we have a little weekend getaway so I plan to do a lot of walking and eat whatever is good and vegetarian, it will also mean I won't be posting on Sunday as we won't get back until late and I can't do one ahead of time as I won't know what I've been up to!


*NSV Update: Almost forgot, my walk on Saturday, as it was rather hilly and Fitbit counts this as walking a flight of stairs (or in their words the tracker calculates elevation gain based on the reduction in atmospheric pressure) I earned a new badge, 75 flight of stairs walked in a day, that's 750ft! *

*Sunday update - how pants is this, I woke up this morning, not feeling sore but run down and miserable - I blame having to hold in my pee in for so long yesterday, my kidney just started to hurt more and more - well I should say my half a kidney (if you don't know the story there are a couple of old posts about it, here, here and here - last post contains some graphic but small photos), I just feel like I have flu coming which is no good as I'm away next weekend, I've decided to rest today so no steps and no yogalates!*

I hope everyone else is feeling a lot better than I do right now, hopefully my will and determination will be back in a day or so! If all else fails I just want to be feeling better for next Friday!


Short Term Goals
As mentioned I want to cut my calories slightly but apart from that I just want to keep my fitness levels up.


Long Term Goals
Still the same, although I'm getting a weekend away I would still love a beach holiday where I can swim for hours on end!