Carrying on with the diary style entry but I'll try and keep it short this week!

Monday 23rd June
Another decent day food wise, I've stuck to my goals. I didn't exercise tonight as I was hot, tired and had an awful headache so I just wanted to crash once home. I did however get my steps up again, I had originally started the day quite lazily, well I wasn't being lazy but I was stuck behind my desk in the morning so was only at just over 3,000 at about midday I did join some friends on a walk around the site which managed to take me up to 9,000. After a desk based afternoon I still managed to add a.bit more to my total which happily meant when I left work at five I was over 10,000. I walked home and did some grocery shopping on the way so my steps are impressive and the rest from exercise was needed.


Tuesday 24th June
Again food wise fine, vegetable stir fry for tea which is always a good option although a bit dull. Still feeling poop but made sure I got some exercise in, did some standing pilates followed by one of my exercise dvd's so a mixture of cario and strength. Steps wise I did rubbish compared to yesterday but amazing in general! It's sometimes hard not to feel down on myself just because I haven't quite reached the high that I had previously.


Wednesday 25th June
Now another busy day at work plus an early start but this did mean I was running about a bit which helped contribute to hitting just over 15,000 steps again. I managed to get my calorie intake to where I wanted it to be, not too high, not too low! Nothing interesting to report with what food I ate, my usual stuff really. Although as I knew we were having quiche for tea that did motivate me to get my steps up even higher as I was so exhausted I knew I was going to have to rest rather than exercise.


Thursday 26th June
A quieter, catch up day today so I was behind my desk most of it but I hit my target both step and food wise. I came home early and The Beast, although not acting ill or in any kind of distress, had slightly laboured breathing. He is ill and we know there isn't anything we can really do now but we did rush him to the vets just to check, it isn't anything new just the tumour possibly pressing/the hot weather so he just need to keep up with his tablets and make sure he is in a cool place which we will do. Again they reckon he won't have long (weeks rather than months) so I'm yet again devastated but I know if it ever gets to a point where he is in discomfort we will have to do the right thing. I''m feeling a bit emotional but push on with some exercise when we return. I've started to drink a protein shake after my workout for extra calories and extra protein, just unflavoured impact protein whey.


Friday 27th June
Now I've managed over 10,000 steps today but only just. I decided to make tonight another rest night, I think in future I'll make this a permanent thing, although we usually have a slightly larger tea tonight it still fits in with ease so I just need to adjust some things. It makes sense though, so Monday and Friday night I'll plan to be my regular rest nights. Food wise pretty much the same although as I have breakfast with friends I just have one piece of toast today with eggs. The usual take-out consists of a tofu dish and an egg dish as usual - Manage about a third of each dish.


Saturday 28th June
It's a funny day when I''m looking after The Beast, everything takes so much longer to do. He's in and out most of the day, plus he tends to eat tiny meals, just about 8-10 times a day! I still manage to exercise plus his demanding but lovable style helps with the steps. Now I'm not at 10,000 but I'm not that far off plus I work out hard today so it's not that bad. Had another lovely breakfast of yoghurt and granola - speedily becoming a firm favourite at the weekend!


Sunday 29th June
Another hectic Sunday of nothing, I've managed to be busy whilst barely doing anything only just sitting down to rel at 5pm. I've sent a good chunk of the day exercising whilst/looking after The Beast. I was on and off the cross trainer so many times I didn't think I'd ever complete my fifty minutes, plus he kept insisting on lying to the side of it so every time he got up I had to freak out and stop what I was doing to avoid hitting him! in the end I plonked him on a chair and he climbed on the windowsill so I got there in the end and followed it with trying part of a new HIIT routine a quick 30 minutes of Yogalates. I had another protein shake today which I think I will after to every workout. We just get the My Protein brand Impact Whey protein which is just over £22 for 2.5kg which works out at 100 shakes so 100 workouts! Sill have to decide on what to have for tea but as I've got 800 calories left I'll have plenty to choose from. 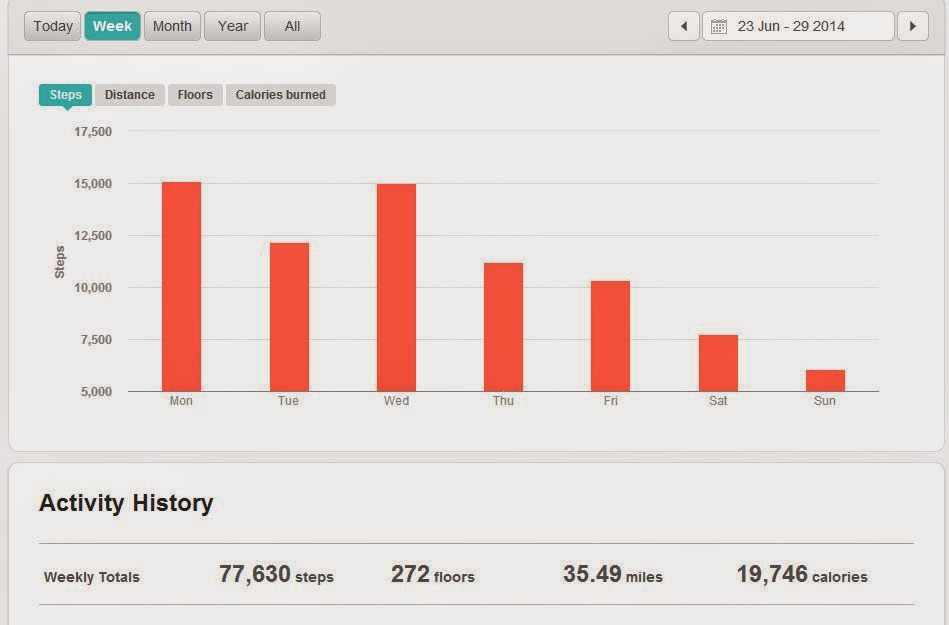 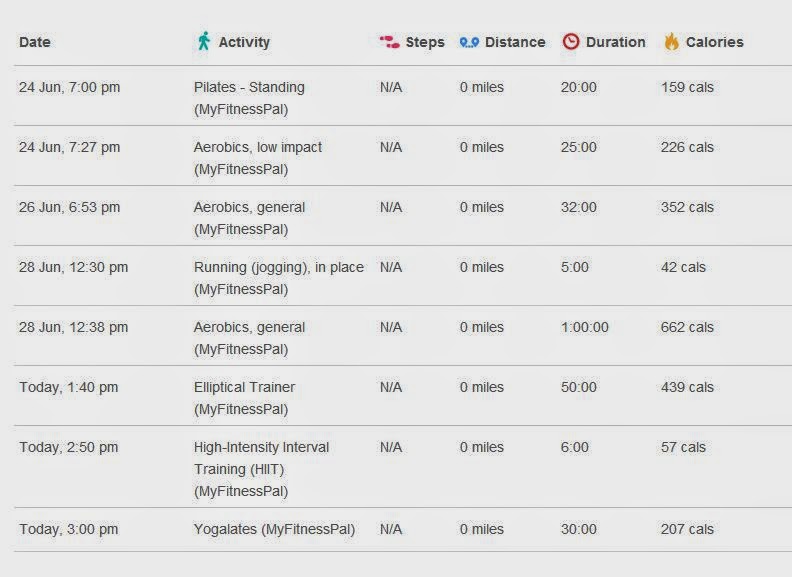 NSV (None Scale Victory): I've been able to get further in some of my poses in Yogalates which means one of two things or both, I'm improving my flexibility OR my boobs have shrunk, both things = very good!

Short Term Goals
To be able to get further with my exercise, better flexibility, harder work-outs, better stamina. Sticking to making sure I eat an hour before a work-out and grab a protein shake straight after. Distance Goal this week is going to be 37 miles!


Long Term Goals
That holiday I want, I want it as soon as possible but that would have a to be at least a few months down the line. My old comfortable trousers from Joseph, they have to fit again.