Sunday Weigh In: One Day Late!

Well I'm one day late but I have a good excuse - I was on holiday! Okay this was just a 3 day break in Chester for my partners birthday, but this is the longest I've been away from home in years - well apart from 6 days in hospital last year but that doesn't count and I'm determined to be able to say I've been away for longer somewhere by this time last year. Last Friday also marked the year anniversary of my surgery, this meant that my partner spent his last birthday in hospital with me which is why I treated him to 2 nights in Chester - mainly to go to Chester Zoo!

Enough about that, time for the whole healthy eating and fitness weigh in - of course the weigh in now relates to how I've done rather than lb loss. The beginning of the week was a bit of a blur but I remember I was controlled with my eating, I stepped up my protein intake (I always struggle as I'm a vegetarian but I don't pay as much attention to it as I should) I started to pick up some high protein yoghurts to eat after my work-out and will also start to pick up protein powder again at some point.

Last week I managed to eat less in the evening than I usually do. It was my mums birthday last Monday and we had birthday cake just after I got home from work. I found that having a piece of cake that was around 250 calories was better as I didn't snack on small things that amount to more. Now it won't be cake all the time but it will be a bit this week as it is James' birthday today but instead I'm going to leave my bananas at home and have one when I get in.

I didn't get as much exercise done as I did previously as I was still feeling a bit icky and didn't want to be ill for the weekend. I did manage a bit on the Tuesday and the Thursday night. So those four days were well under control, so what about my break away?

Well it was a break away, you should try things on holiday, enjoy yourself. It was slightly more controlled, I tried to have some fruit at breakfast and yoghurt. Lunch was whatever was good, handy and vegetarian (James is also veggie so it makes it easier) we had meals out both nights with a couple of glasses of wine. We really did have lovely meals out, Tapas the first night and a gorgeous Italian meal the second (Aubergine in a tomato sauce with cheese is my idea of utopia!) I have to admit to having gelato on two occasions on Saturday but I'm head over heels for gelato. So we had three good meals a day but no snacks. The walking really did make up for it which is why I'm leaving my step count photo to until the end.

James and I are both full pedestrians, neither of us can drive so not only do we use public transport to get to places but we also walk around a lot. Over the three days I managed a grand total of 49518! so all those scoop of gelato were well earned. I managed to earn a new badge on fitbit, 20,000 steps in one day! 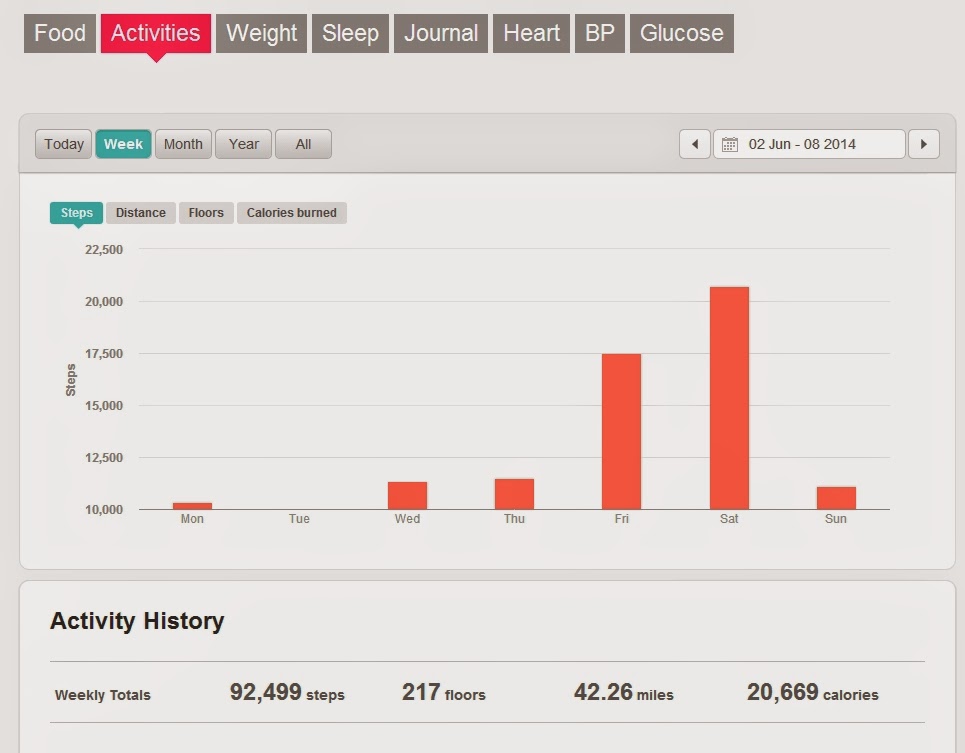 My steps for the week - because of the amazing weekend my steps earlier in the week look less impressive! I broke my goal for miles but won't be attempting to top this in the coming week.


Short Term Goals
This week I'm going to aim to walk 33 miles. I want to up my protein but keep my calories to slightly less in the evening - by this I mean less snacking when I get home from work.

Long Term Goals
Now I loved my weekend away, it was fantastic but this has really made me want to focus on it all, my long term goal has always been to go on holiday and feel comfortable and this weekend brought it home. I enjoyed myself but it took me ages to find clothes I truly felt comfortable in, I felt large and conspicuous. Plus I refused to have my photo taken so again I have no snapshots to remind me of this trip although we will do it again. This time next year I want a beach holiday.