When I first started to do the diary entries I thought they would save me time and I'd be more to the point, neither could be said to be true and as I've been even busier this week I'm dropping the diary entries, at least for now. I'm going to keep these entries short and to the point as a week isn't a long time when it comes to a lifestyle overhaul, small steps mean small gradual changes. I'm also not the sort of person (at least now) to beat myself up over things that might be considered "bad".

Now as promised, I'll at least keep the rest of the entry short and sweet.

I've been a bit off this week. Monday was a rest day on top of a normal rest day, I was off work on my usual no exercise day and didn't want to change this part of the routine but as I was at home I also didn't get many steps in. Samhain can't go outside for a couple more weeks so it's not so easy to go in and out, plus I wanted to bond with him some more.

I also had a difficult day Wednesday, Tuesday night I developed an excruciating migraine which lasted from around 8pm until 3am, I ended up with very little sleep and ended up eating sugary baked goods on offer at work, a danish pastry as well as toast and some other baked goods, I ended up home by 2:30 feeling lousy and sleeping, although this meant I didn't have my lunch and just a normal tea so I didn't go over my daily calories allowance, nor did I the rest of the week which is the main thing as it's not always possible to do all the steps and all the exercise I plan.

My steps aren't as good this week but I'll aim for better this coming week. I've done a nice amount of exercise and I'm planning to do plenty of relaxing exercise today - standing pilates, yogalates and some cross trainer so I can catch up on my magazines! Which I'm going to hop to now as I've wanted to play some GTA: Vice City this weekend (and Minecraft but this won't happen), I should say again, I think this is my third play through.

Anyway time to run (not quite literally but a lot of stretching), next week I'll have to mention my new trainers! 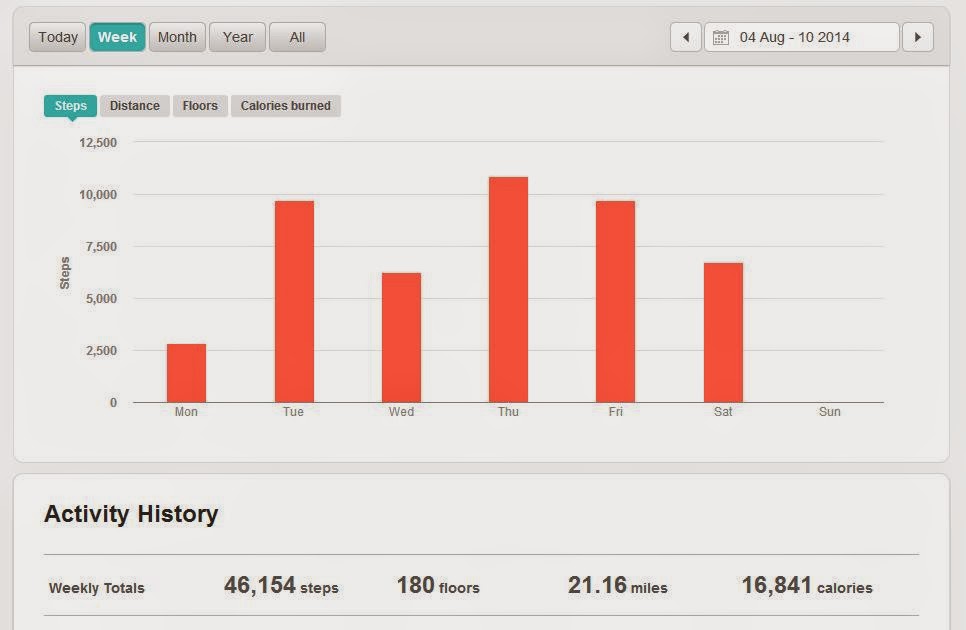 Short Term Goals
Get my steps back up and master the side plank - I can do it but I really want to master it so I make it look effortless.


Long Term Goals
I think we can scrap the holiday this year as we'll want to spend our free time with Samhain but I do want to think about wearing some glitzy, vintage party dresses this festive season, and have an amazing Halloween outfit or just be able to wear my bat shirt, slinky black trousers and those amazing red velvet boots without feeling tubby.