I'm sure last week was the week I was supposed to get everything back on track after weeks of being super busy, that really didn't happen! Not that it was supposed to be a quiet lazy week apart from exercise, I was always planning to do a car boot sale on Sunday and I needed to sort out a little bit each night. Anyway, I'll keep it brief but here is what happened last week.

Monday fine, normal, as usual this was my rest day but I got my steps up close to 10,000. Tuesday, another normal day both eating and walking wise - my steps were pretty impressive today, although at this point I thought my hayfever was giving me hell. I carried on and did some exercise by the time I go to bed I realise that it isn't actually hayfever so I get an early night. Wednesday I feel rotten, I drag myself to work but don't last long, on the way home I grab some groceries (to make potato ash without the meat so just potatoes, carrots and onions!), medicine and ricola to soothe my throat. By the time I was home I was just laid up in bed, Thursday even worse and the same Friday so nothing was tracked at all, well footsteps were but I know they were well below 10,000 although I did need the loo a lot! To be honest I felt so rubbish with flu that I just didn't and don't care. 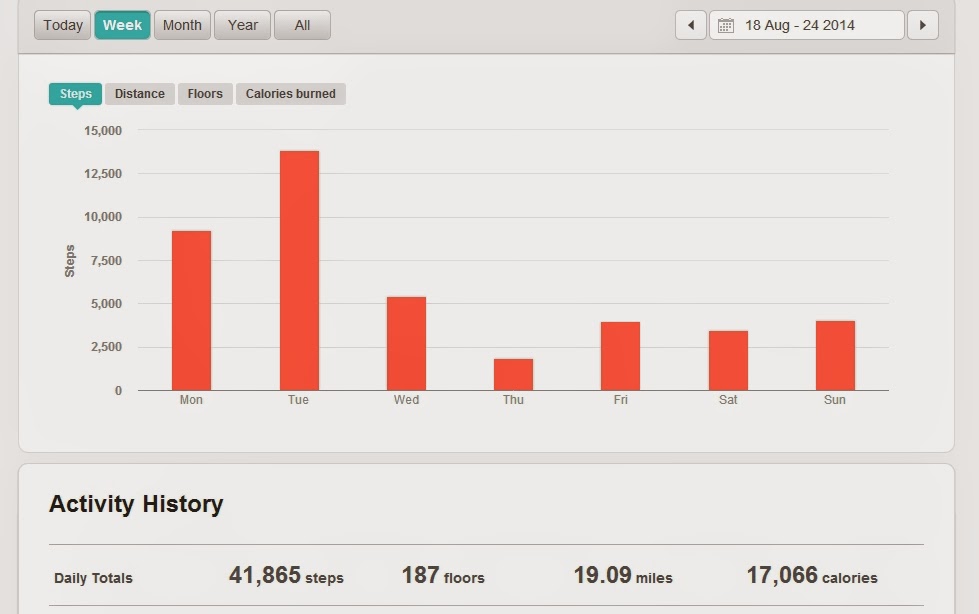 More annoyingly I didn't get the chance to sort out the car boot stuff so I dedicated Saturday to sorting out goods to sell on Sunday. It wasn't just time that was an issue but I was still feeling very run down, snotty, sore and with a cough so I was doing things in stages which took all day. As I was doing a car boot on Sunday I decided to write the week off, not that I'd been bad,food had been basic not exciting so most things would have fitted in apart from the cough sweets, my throat was so sore and dry if I wasn't drinking something I was sucking on them, plus I was having lucozade so that might have broke the bank but it was a week of being ill.

So this week will be normal and I'll be sticking to today (Monday) being my rest day as I'm not completely better yet so it will be nice to go and crawl back into bed and rest so that I can back in full form for the rest of the week!


Short Term Goals
I was going to say it would be nice to have a week where I manage 10,000 steps every day but I think to be more realistic I should instead aim for 70,000 total a week that way I allow for life's little ups and downs.


Long Term Goals (Same as last week)
Looking towards fitting into something nice at Halloween and around Christmas time.
Posted by Unknown at 09:08