A bit of a change of plan this week, instead of posting on a Sunday I'm instead going to reflect on the week up to Sunday the Wednesday after. I think I'll still be able to evaluate the week before and have a little more focus. This was actually spurred by something else, I wasn't very well again this weekend which I will go into.

A few weeks back I found a lump in my back, it's increasingly becoming more uncomfortable. I'm hoping it's benign again but right now it is causing a lot of trouble. Where I had surgery to remove my previous tumour (it was in my kidney) has also been painful since having flu, I've got a scan and a doctors appointment coming up but for now I have to deal with it. On top of aching and being in pain, awful stabbing burning pain.  I've also been uncontrollably tired. I don't mean I just don't feel like doing anything, no get up and go, but I'm just not able to keep my eyes open. Each day has been hard to get through. Sunday I spent all day in bed, up for a couple of hours then asleep again - which is why I didn't post. I was in work on Monday but incredibly tired, I was fast asleep by 9.30 at night sleeping through until 7.30 in the morning. I was then exhausted again. On top of that it's hard to sit up straight without discomfort. That's enough about this week, I'll track back to the previous.

I should also mention that it doesn't mean I've given up, but my attitude is different. I'll focus on keeping active and eating as healthily as possible, along with a few updates on my general health.

Up until Saturday my steps last week were back on target, 10,000+ Monday to Friday. I also exercised Tuesday and Thursday. I always knew Saturday would be different as back at Christmas time I won a £100 Clarks voucher from East Midlands Designer Outlet, last weekend was the first time I'd been able to collect. As we'd be out most of the day I decided I'd skipped the exercise, although I'd hoped to have done more steps we were out even longer than expected. More on my shopping trip in another post!

As I was ill Sunday these was no exercise, I also decided as I was in pain I'd try and take it easy this week but still try and get my steps as high as possible as well as fitting in some form of exercise when it gets to the weekend.

Food wise it was a better week, I cooked three evening meals although one of them was pancakes! I kept them simple (added some protein powder into the mix) with a bit of sugar and lemon juice. I also made a gorgeous sun-dried tomato sauce served with aubergine and courgette, see photo below, aren't the colours gorgeous? I also made a chilli-non-carne with vegetarian mince and kidney beans, plus a lot of cumin! I do love my cumin. All, even the pancakes, were fairly low calorie meals and very filling. I do love my own chilli! 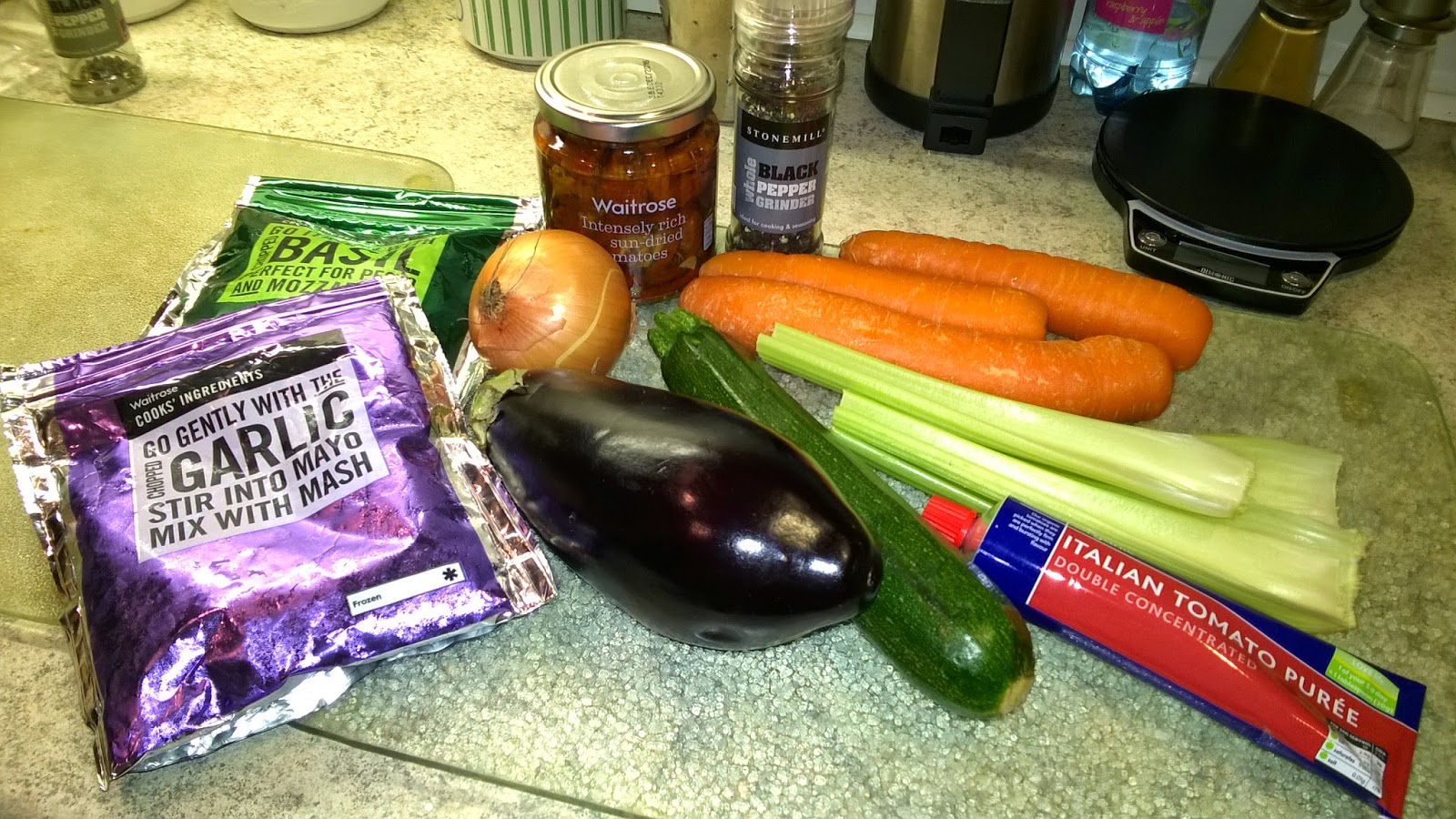 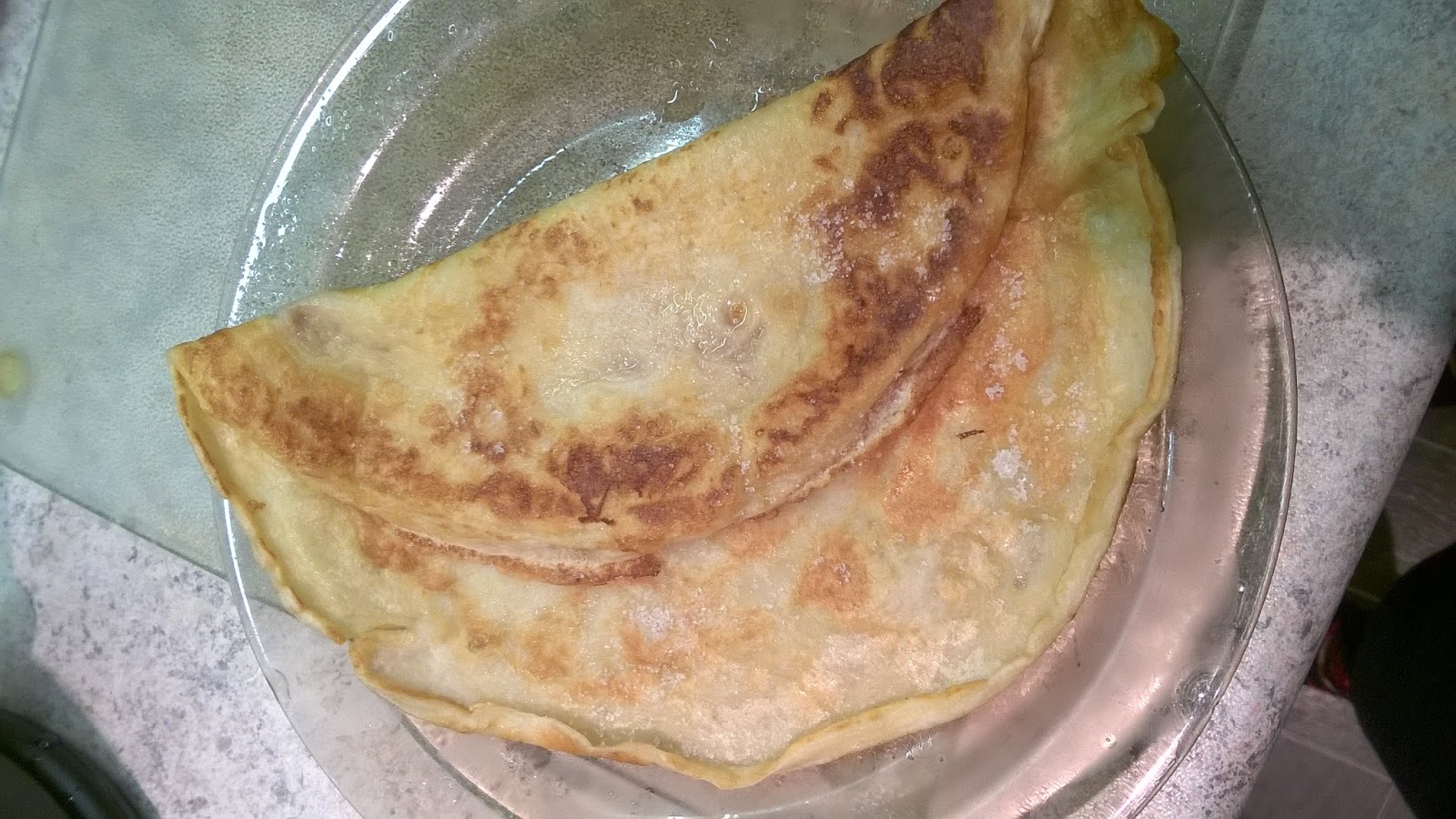 I almost forgot, keeping weekend mornings healthy. Trying to work out the right type of yoghurt, either something organic sheep/goat small farm or soya, I'm a bit funny with yoghurt so I like it simple. I had the yoghurt with raspberries, blueberries and granola - yummy! Samhain wanted to help himself, I gave him a little bit of the yoghurt, he loved it! 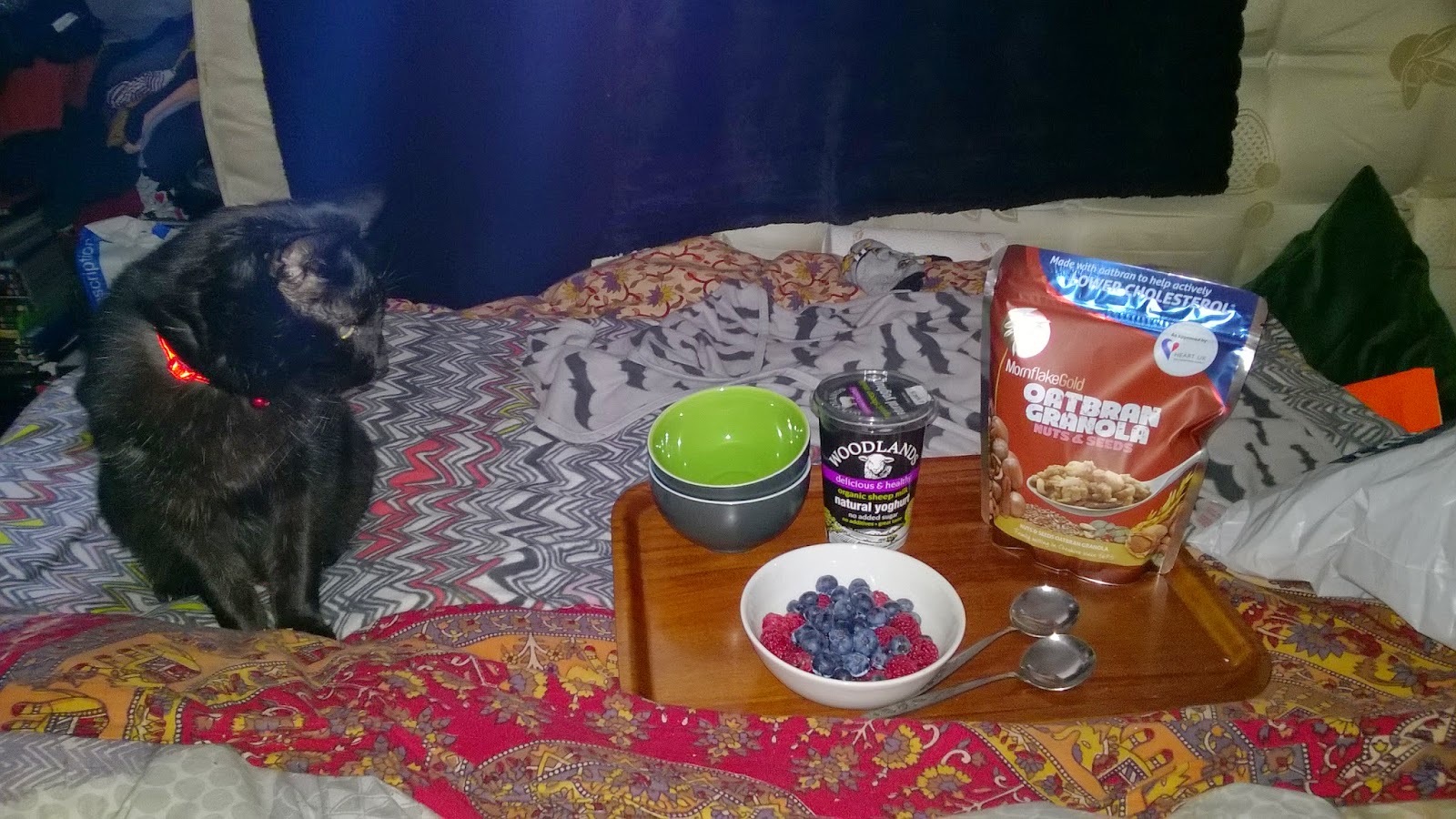 Now I'm still not weighing myself but I do have some kind of progress indicator. I picked up a bra from Calvin Klein and both my cup size and the actual around the body measurement are now a size smaller, I just want to go down one more size there and I'd be happy. Plus the bra is utterly gorgeous, again I'll post my shopping.

So this week, I've already mentioned a little bit, but the aim was just to get through the week. To rest somewhat and slowly get things back on track if I can. I don't know what my long term prospects will be, whether I'll start to feel better. I'm already at the point where I'm worried that I'll never have energy or be pain free and that I'll be taking pills daily. I'm trying not to let it get to me but I also feel a bit like I'm damned if I do, damned if I don't. I might feel somewhat better if i lost some weight but getting there is hard when you're too tired and sore to exercise. I'm really hoping this is just a bad week. I'm aiming for a half decent amount of steps a day, more sleep and less food. Keeping it simple.

I hope everyone else had a better week, onwards and upwards I hope!