My Film Picks for Halloween - Warning, Not for the Faint-Hearted

**Warning - Some of the trailers are for a more mature audience, if horror isn't your thing it might be best to look away**

I love Halloween, I love the kitschy crap that now comes with it, I just love it full stop. So of course I've been thinking about what films to watch over the Halloween period for weeks. Now I watch horror 365/6 days a year, if I get the chance that is, basically I watch a lot of horror. Some films are just tradition with me, I watch them every year, others I may own but have yet to watch. Now thinking about what to watch at Halloween is different, it isn't just about what I want to watch but also what will appeal to others, I do love to introduce films to others. I have to admit my taste is somewhat weird and I can sometimes go extreme with my pickings but this year I want to appeal to all.

With a planned film watching event at a friends house on the Saturday afterwards I want to watch as many films in-between and after as I can, I have a few suggestions for the night but really it isn't just down to me. We will be watching Halloween (1978) as one of my friends hasn't seen it before so she has put in a request for this (I'll be bringing the blu-ray along). Now as I've mentioned my tastes can be extreme, so if you aren't a fan of horror it might be best not to watch some of the trailers below! I sometimes find it hard to gauge if something would be too much for others. Horror spans such a wide variety of areas too, what might scare one person could be bland to another, so where to go? 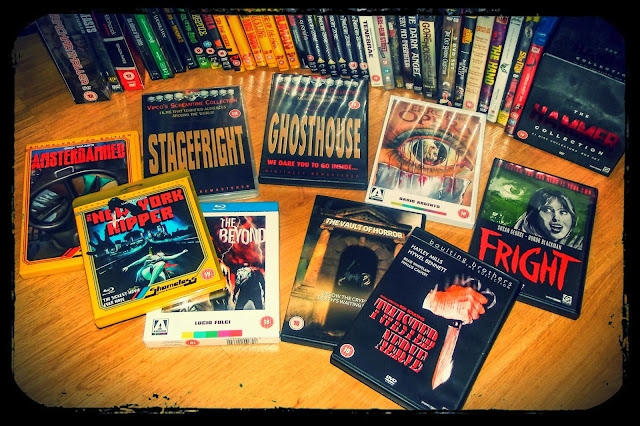 One film that we will hopefully watching first thing and early on in the night is Fright (1971) a British film I really consider to be a prototype slasher movie. It has all the hallmarks of a slasher film, babysitter at home on her own, weird noises outside, watching a horror film herself, boyfriend calls round, etc. It might not be as full on as the later slasher films but it holds it own along with having a superb cast, I'd highly recommend it to anyone and everyone.

Now the rest are just possibilities for the night but if not they will definitely be watched around that period.

Next up is The Vault of Horror (1973) a joint UK and US production, although this film is billed as being based on EC comics The Vault of Horror, none of the stories featured actually appeared in the comic. They did however appear in sister comics Shock SuspensStories and Tales from the Crypt. Now I love a good portmanteau, a good horror portmanteau, I just love anthology series be it old TV shows or old horror films I love The Vault of Horror, it is one of my favourites although I have to say Dead of Night (1945) being a very early one happens to be my favourite. This comes a close second but we won't be watching this on Halloween, why you ask? because after taking the photos I felt so compelled to watch it I did. I just love this movie, it really is quite gruesome.

Another British film with Twisted Nerve (1968) now although this film implies a controversial/erroneous reasoning which I won't go into as I wouldn't want to ruin the plot, rather than just being a good film it is also a superb piece of cinema with a soundtrack you won't be able to stop whistling, hell, each time I see Hayley Mills in any film I start to whistle it. With Hayley Mills and Hywell Bennett teaming up to star in another Roy Boulting outing not only is it a well thought out film but also a well acted one, not something I always go for! Now I know I've mentioned the plot is erroneous in its suggestion but I'm pretty sure the majority of us don't watch films for reality, with the amount of horror I watch I'd hope not.

Next we go Italian, most of the other selections are Italian although all are dubbed in English, first we'll start with The New York Ripper (1982). This Fulci film is rather bizarre but thoroughly entertaining and just a little grim. Although it is a fairly gruesome slasher, in the UK it was banned from being shown in the cinema at the time of release, it is also a little bit silly, well to me at least, but it has a good story - I think a lot of current horror films can be all shock no story which I hate. Now although the current release in the UK of The New York Ripper is still cut there is a beautiful Blu-ray release from Shameless who really do have a plethora of films suitable for Halloween.

Time for one of my all time favourite films, Opera (1987) aka Terror at the Opera (I've always just known it as Opera) now although it is one of my favourite films it isn't quite my actual favourite from the director Dario Argento. This comes down to my mood, at Halloween it is number one, with Tenebrae (1982) a close second. The film centres around the common superstition surrounding the performance of Macbeth, a young girl takes over the role after the previous lead is injured in a car accident, now are the incidents that follow down to that superstition? Filmed at a troubled time for Argento the films production also ran into several problems, some say his choice to use Macbeth (Verdi's operatic version) in the film led this.

Time for another Fulci film and the third Italian film on the list. To say I haven't watched The Beyond (1981) in years is a slight lie, I've watched it fairly recently, around 3 years ago, just not in a sober state, it is a great post drink/pizza film. Supernatural occurrences abound as a young woman inherits a hotel in Louisiana, unbeknownst to her is what had happened in that hotel decades before with some necessary renovation work activating a gateway to hell - this really is the tip of the iceberg as I don't want to go into all that the films are about and explaining The Beyond  in a few lines is a hard task.. Another gore soaked possibility and with a gorgeous steelbook edition on its way to me it will be hard to resist.

StageFright (1987) yet another Italian film, they do make up the majority of my selection, I really don't think anything gets better than Italian horror. Having previously worked both in front of the camera and helping out behind, working frequently with Dario Argento this is Michele Soavi's first feature film as director. Here we go back to the theatre this time with a more low key, small town production where the cast, having been locked in the theatre, find themselves being terrorised by an unknown killer. I've already watched this film this year but I'm ready to watch it again.

Ghosthouse (1988) I watch this film every single year, I adore it. A deserted house brings terror to those that happen upon it, a group led there by an anonymous radio call find themselves in a seriously bad situation thanks to the ghostly visions of a deceased girl and her frigging creepy clown doll. This film deserves a much better release than what is already out there, like a lovely, shiny, cold steelbook.

Last but not least from Dick Maas Amsterdamned (1988) this time a Dutch horror film with an interesting use of the layout of Amsterdam. This is on my must watch with friends list but I can't decide whether Halloween is the perfect time, it is a horror but it's also pretty action packed too. A mysterious frogman lurks in the depths (well about 10ft?!) of the Amsterdam canals, attacking prostitutes and those daft enough to take a rubber ring out for a lazy ride on the canal. To put it simply, if you want horrific deaths, a speedboat chase on a canal and a catchy pop theme song then look no further.

As you can see I'm spoilt for choice, for me this isn't a super long list, I spend a lot of time thinking about what to watch at certain times of the year. Now has anyone else been planning a Halloween horror-fest for weeks?
Posted by Unknown at 16:40