I love bread, so simple but so delicious. I never think about making it from scratch though, I blame this on bread machines. I've never used one, I'm sure they're great but the fact that they exist makes me believe that bread is complicated. It isn't there are only a few ingredients even in this one which has more ingredients than necessary.

I decided to make bread rolls this weekend rather than a sweet treat as I felt the urge to make some soup which I did and I'm sure I will post later, although not as exciting as bread. 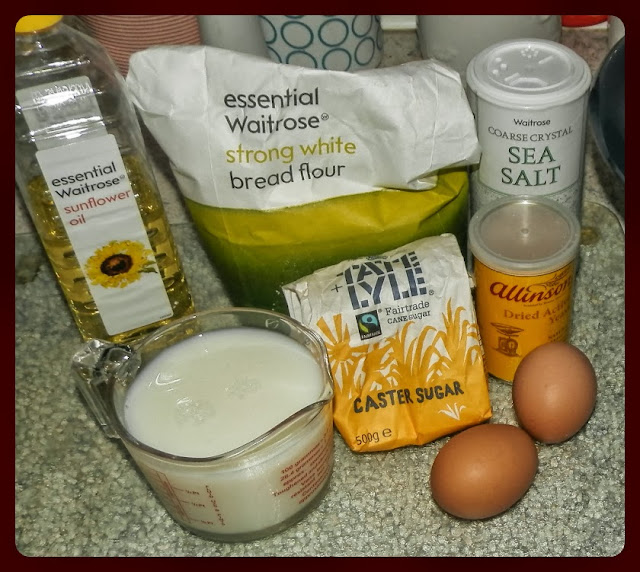 It's a simple recipe, mixing the ingredients together takes a matter of minutes however to proof the dough takes time.

I'm always worried with yeast so I start by adding the yeast to a little bit of warm water, less than is suggested on the packet, about a quarter of what is suggested as the mixture will be too moist. I also add the sugar and leave to sit for 5 minutes while I weigh out the rest of the ingredients.

Once the mixture turns to a soft dough I roll it out on a lightly floured surface to knead the daylights out of it. Once the dough is starting to look smooth I place in a lightly oiled large bowl and cover with cling film before placing it in a warm spot, under a radiator usually works wonders. It needs to be left for around an hour or until doubled in size.

I prepare a few baking sheets by lightly oiling them and re-flour the surface I'd used previously ready to work some magic. 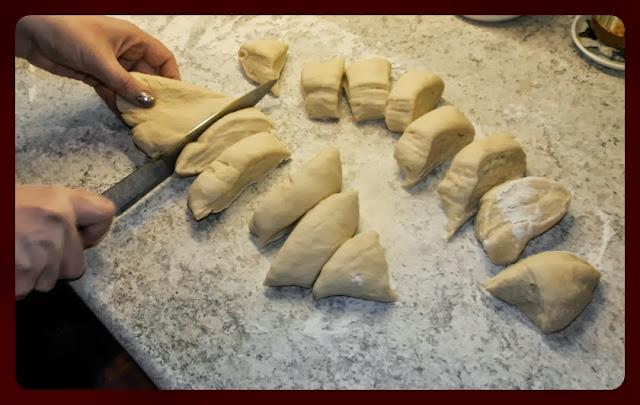 Once the dough has doubled it needs to go back on the floured surface and knocked back down. I then roll it into a long loaf shape before slicing down the middle and then cutting 18 small dough pieces to make into knot rolls. Similar to the pretzels I then roll in-between my hands creating a cigar shape, don't worry about rolling them too thin, the rolls will double up again.  Then I simply knot them, sometimes double knot them and other times letting my partner do random shapes - his is the one with the hole in the top. It really doesn't make a difference to how they bake.

After these have been placed on the baking sheets sprinkle a little flour on top, I usually use what is leftover on the worktop and cover the trays with cling film. They then need to sit somewhere warm for around half an hour so they can double up. Turn the oven on to gas mark 4 to give it a chance to heat up. 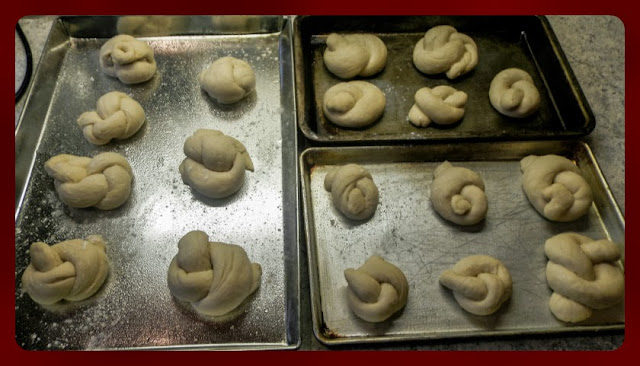 Before popping them in the over spread a little of the bicarbonate of soda solution on top of the rolls. This will give them a lovely crunchy texture. Place them in the oven and in about 30 minutes they should be done.

They should turn golden on top when ready. To fully test them turn them over and tap the bottom, they should sound hollow.