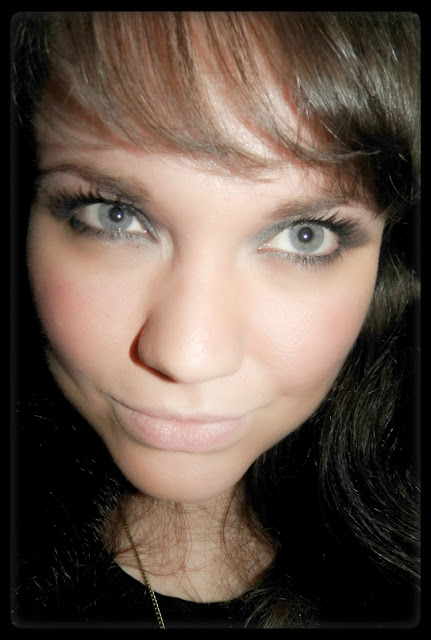 Another Wintery look, this time courtesy of one of the palettes from the Rick Baker Collection, The Monster's Bride. I finally had the chance to play with the palettes but I didn't purposely set about to use one of them.

I'd been thinking about having full on black 60's style eye make-up for a while after seeing a similar look stare me in the face each time I watch an episode of Adam Adamant Lives!. For those with no prior knowledge of the show a brief summary: A dashing, debonair, gentleman adventurer is first seen in Edwardian London being lured by a deceptive woman (a common theme throughout the show) into a trap which sees him frozen alive until he is eventually unearthed during the building of a multi-storey car park in 60's swinging London, we then see him try to learn to adapt to modern times, without losing old-fashioned sensibilities whilst stopping devilish dastardly plots. I know I'm being a bit random here but even the smallest things take me off on another route. In each episode (that I've seen of the show) there is a flashback scene with the line "So clever .. but oh, so vulnerable", accompanying this is a close up on a set of ladies eyes which are heavily made up in presumably in black eye make-up, considering this show is in black and white I'm really making it up as I go along. After a couple of weeks of watching I've finally made my lazy self get on and try a full on heavy eye make-up look which is presented above and detailed below. 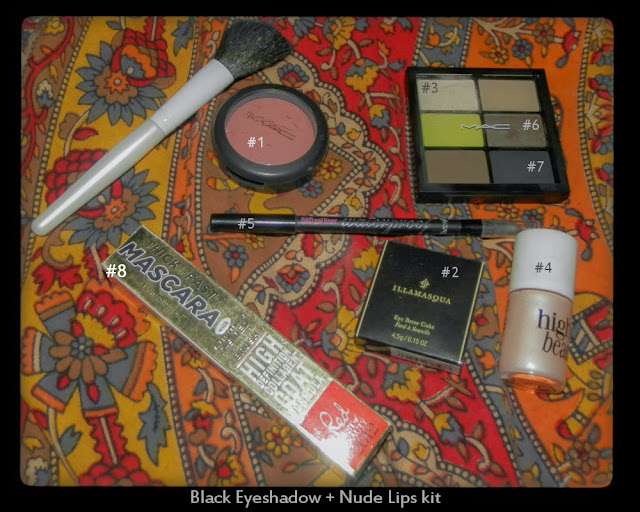 As usual I've started with my normal foundation routine although I also added plenty of concealer around my eyes to try and get a lighter, even base, I also used a good lip balm (EOS lip balm works wonders) before using some of the foundation on my lips rather than using a lipstick later.
Rather than my usual light pink blusher I've gone for something slightly darker using MAC Desert Rose Powder Blush (1) spreading all over my cheeks and down the side of my face.
As this is a rather heavy look I've made my eyebrows slightly darker and filled them in using Illamasqua Eye Brow Cake in Thunder (2). I think I could have made them slightly heavier but I do worry about my eyebrows looking too unreal.
Next I move onto the MAC palette The Monster's Bride, I use the shadow Mylar (3) all over my lid up to the brow, I want a really light base before going so dark. After this I place some Benefit high beam (4) under the brow. I usually use the high beam down my nose, above my lips and on the apples of my cheeks but this time I wanted to keep my face matte so restrained myself.
Now before I apply the eyeshadow I've used Benefit Bad gal liner (5) to line my eyes. I hate yo-yoing between each eye to even things up and with dark eyeshadow it is near impossible to do this without going overboard so the eyeliner acts as a guide. My first step is to start from outer corner and work towards the end of my eyebrow but stop about half way before lining my lower lash line and finally my upper before smudging it all in a little bit.

Time to get the eyeshadow on, back to The Monster's Bride palette. I start with Club (6) a light, red-brown with a hint of green shade, this goes all over the lid and up to just below the brow. I never really think to put anything resembling a dark shade so far up, I always stop at the crease, I need to get used to applying further up. Time to throw on the black, using Carbon (7) I apply liberally all over lid, in the crease and to the end of the outer eyeliner. Afterwards I use the brush used for applying eyeshadow to line my lower lashes.

Here you can go down two roads, false lashes or mascara, I'm hopeless at applying false lashes, I actually tried and failed to do that with this look. Luckily Soap and Glory Thick & Fast HD mascara (8) is dramatic enough so I applied more and more until I couldn't fit any more mascara on, well, not quite, about 3 coats did it.

Nothing extra on the lips so that is it, heavy black eyes and nude lips, perfect for Halloween. Alternatively if you want to go full on how about a dark lipstick too? I was playing with MAC lipstick in Cyber at the same time so here is the look along with a super dark lipstick.