I mentioned in my previous post that I don't tend to weigh in so frequently but I do like to reflect on the week before, what I did right, what I did wrong, what just went wrong, etc.

It an in-between week. I love my fitbit, it has really encouraged me to move about more and on Monday 13th I managed to hit my highest number of steps since getting it, I was feeling motivated to push for more the next day, everything would be fine. 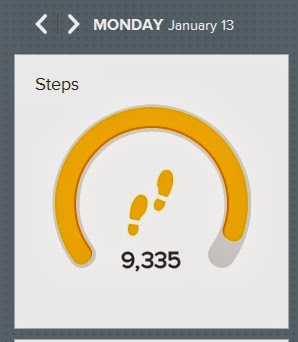 Tuesday was not fine, I was not fine, I came down with an awful tummy bug and the room began to spin. It remained spinning until after lunch the next day. I was off work and everything was rubbish. It kind of felt like I had put in the effort and was rewarded with illness. Although that thought didn't last long, it was silly to let the odd couple of days ruin everything and Thursday I tried even harder and Friday even more so. 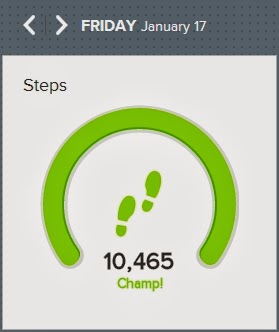 It reminded me how we really can't help set backs, weight fluctuates, one day you might not even feel up to moving let alone exercising but that doesn't cancel it all out. Blips should be unpreventable expectations. We aren't going from 0-60 instead we need to take it up a notch one step at a time.

This week although I've not been hitting my target of 10,000 I am doing better mentally which is more important. I'm on a course for most of the week, travelling 75 minutes each way, I also have homework. In my head I'd decided that I can't really do much, just concentrate on the course (there is an exam!) and nothing else. Today was my first day, I was up at 6am but by the afternoon I had decided it was finally time to open that fitness wear drawer, put something on and actually do some exercise, which I did. 30 minutes on the cross trainer, 10 minutes free weights.

So have I lost weight this week? I've not checked. Have I made some progress into getting back into a healthy lifestyle? Absolutely.