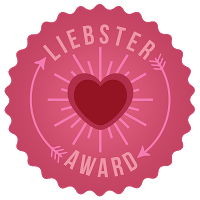 Now I'm sure most people know that the Liebster Award is a nice, friendly way to get to know fellow bloggers. This is the second time I've done this, which is no bad thing. This time I was nominated by Ginger And The Blonde a fabulous beauty, fashion lifestyle blog run by two sisters - Ellie and Brooke.

Here are the rules:


11 Interesting Things About Myself (which might be a struggle)

1. What is your favourite kind of blog post to write?I actually prefer just general stuff with photos and shopping spree type posts.

2. Favourite fragrance?Modern Chypre by Esteban. I love the scent but the fact that I can't get it in town any longer makes it extra special.

3. Are you an early bird or a night owl?If I could I would be a night owl staying up until the early hours but I have to go to work meaning I have no choice but to be in bed at a reasonable hour.

4. Which actress/actor would you like to play you in a film about your life?A tricky one, I honestly don't know who I would say.

5. Do you have any hobbies? If so what are they?I collect films, I collect a whole load of films but don't ask me about modern blockbusters, most of them I'll pass on. I also like to read. Collect records - listen to music. I love to exercise but haven't been doing much do to my surgery last year. Finding bargains in charity shops and car boot sale. I also love to cross stitch, do jigsaws and last but not least play video games.

6. What is your favourite quote or motto?I'm not really one for a motto or even quotes, my memory isn't so great, however there is one end line in the film King of Hearts (1966) (one of my favourite films) that always sticks in my mind, "The most beautiful journeys are taken through the window".

7. Do you prefer summer or winter?Winter all the way, well really the autumn to winter part, I love the darker nights. I would prefer to live somewhere with little sunlight and lots of snow. I do appreciate a bit of summer but where I live summer usually means warm rain rather than glorious sunshine.

Yes, very new recently adopted elderly street cat we've named The Beast. Incredibly affectionate, sweet but a bit skinny with dodgy back legs. We love him so much and hopefully he'll stick with us, well he hasn't wandered away in the last 5 weeks so fingers crossed!

10. What is your favourite beauty brand?
I really don't have a full on favourite, there are products I love and lots of brands I love but there are no brands that I stick to.

11. Pintrest or Tumblr? Pintrest, I honestly feel too old for Tumblr.


My questions to others are;

This is a bit I find hard, nominating, the below are a few of the blogs I love, whether new to me or I've followed for a while,  however I love everyone that I follow, not many have below 200 so I struggle and have cheated slightly but only a little!