I've just had one of those weeks, well one of those months, I was on a training course last week that included an exam and since I've just been waiting for the results without doing much else apart from work so apologies for my lack of bloggage - it has also been too cold to sit at the computer!

It occurred to me that there was still one more shopping spree I hadn't shared and that it would be best to get it in before the end of January, especially as I ordered these items in December and I'm less than 24 hours from my next pay - which I will not spend one single penny of as I'm due a mini shopping trip near the end of the month. So the final shop is Topshop, here is what I purchased;

I think I've mentioned before how much I love all the Halloween stuff that comes out, also that I like all year round so the sales are perfect to pick up on goodies for cheap. I love these treggings which I'll wear with either a big jumper or a big sweatshirt - possibly not out until I've lost a bit more weight.

I can't really make this skirt very exiting, it's lovely but it is a basic jersey skirt that I've been eyeing up for nearly a year, not in the sale but totally worth it.

I'm a bit obsessed with Topshop socks, every purchase I make from Topshop I end up with a pair. I love their slinky range as it means my feet don't squeak while I walk!

Well I ordered these not a moment too soon with the recent cold snap. I can't remember if I could have bought a matching pair but I really didn't want that. 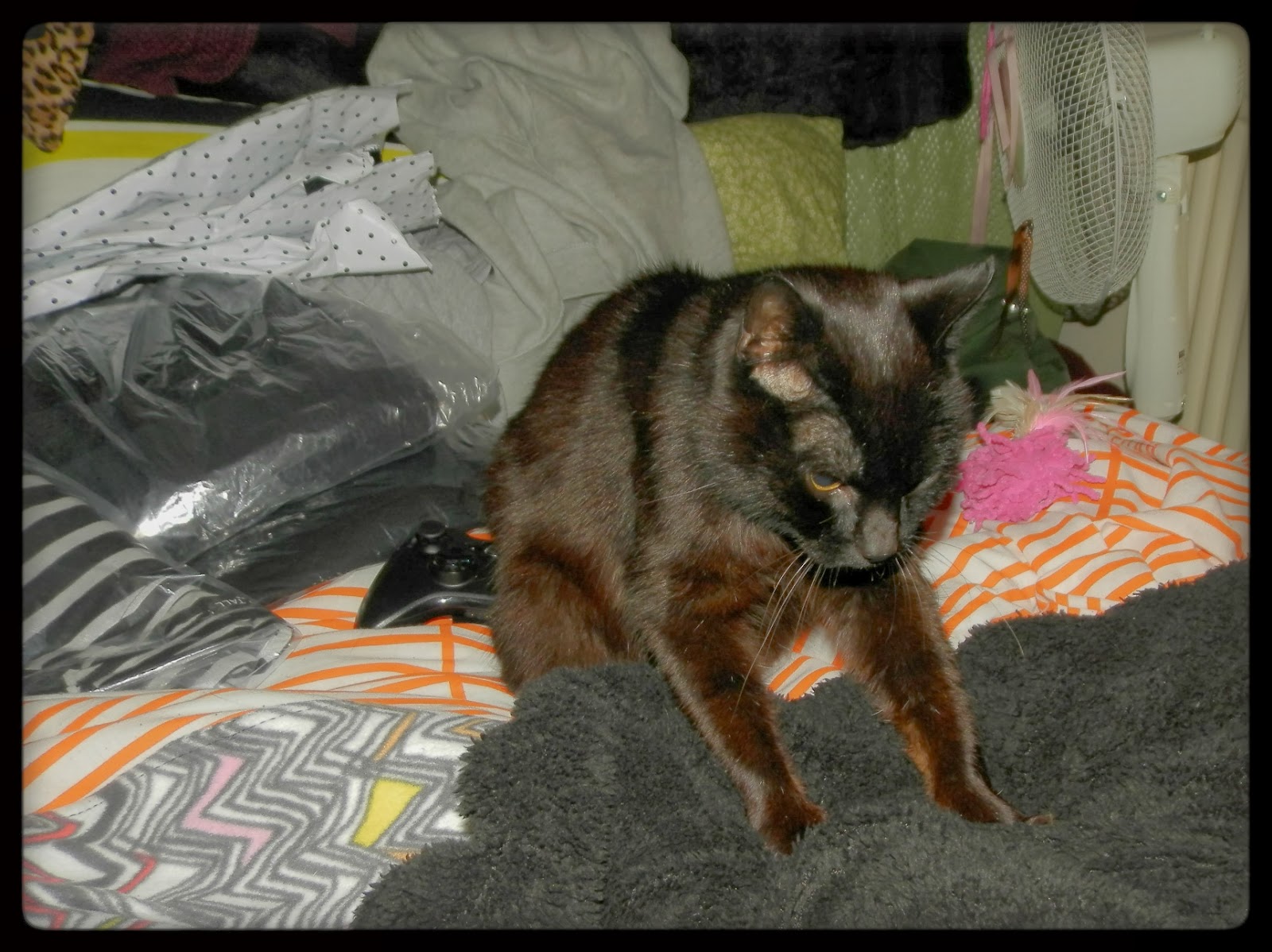 Time for a Beastie break, he likes to get in the way on the bed although not too much recently - since going back to work I've been royally snubbed - except when he cuddles up to me in the night or needs to go out.

Another buy that came at the right time a giant, thick comfy cardigan. It's super warm which is perfect right now. I really was in desperate need of a thick, black cardi.

Another sweatshirt to add to my ever growing sweatshirt collection. This one is a bit more quality than the rest as this is from their boutique range.

I know I buy a lot of striped stuff but it really was necessary, I'm not sure why but it was unfortunately it wasn't in the sale but I have worn it a few times already so surely that counts for something?

Okay I can't justify these, I bought them because I liked the look but also as I haven't bought any jewellery from Topshop in more than a year.

I received another colour in the December birchbox and even though I haven't tried it yet I just had to pick up the green sequins to try.

I did really want this and had come close to buying it last year but I was good and I waited although it wasn't any cheaper it isn't available in this colour online any longer.

Last but not least slippers. Described as panda but I think they look more like a French bulldog. That isn't the point, they are very warm and a bit more structured than normal slipper boots so they don't fall down. I'd already worn them at this point which is why they look a bit worn but they are fantastic.

That's it for my sale shopping although I'm sure it won't be long until I'm shopping again this year I'm trying to save, I do have a shopping trip planned but I'll still try and be good.

P.S. I found out today that I passed the exam so I'm super happy.
Posted by Unknown at 20:36