I think I mentioned that I might not post part two of my sales purchases today due to being addicted to Minecraft, well that was a self fulfilling prophecy. I've spent the day in bed playing Minecraft and listening to 6 music. I'm still in bed as I type this using my kindle to post. However I've turned Minecraft off for a while in favour of watching It's Always Sunny in Philadelphia, again, we're re-watching on Netflix before series 9, it's such a shame it was never aired properly here in the U.K. same with Reno 911!. I digress, as usual.

Well tomorrow is back to work for me but hopefully I'll be posting in a day or two, I still have a few more parcels to arrive, smaller, make-up filled ones which will be easier to post than clothes. In the meantime I'll leave you with this terrifying (adorable) photo of The Beast who is currently snuggled under my armpit, annoyed at my kindle usage. 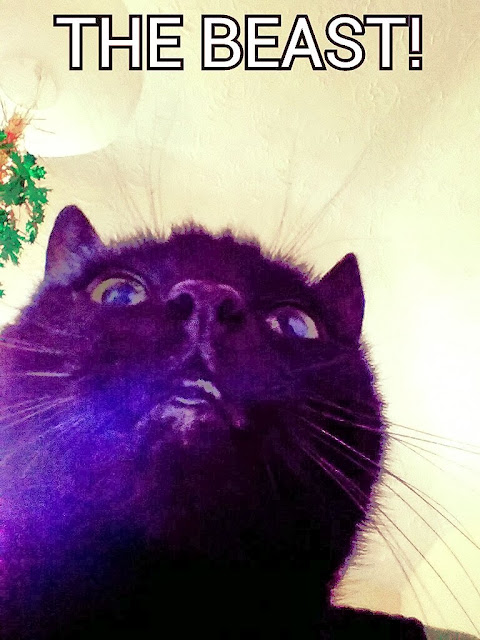 Time to focus on him, he was already worried by the ocelot I tamed in Minecraft! Time for some Blake's 7 before more Minecraft! I hope everyone else is having a very chilled day and whatever your plan is for Monday it goes smoothly.

One last thing, is anyone craving Christmas food? I'd love some Christmas pudding right now, I'll settle with some jam roly poly pudding before I move to mainly clean, healthy eating for the rest of the month - not diet, just more rice and veg.