This week was better, it just felt better in general with everything. I'm still tired and sore but there were some positive changes.

My steps are on the up, not that I'm hitting my "best steps ever" but I'm building up to it. At least it give me a goal for this week, more steps! 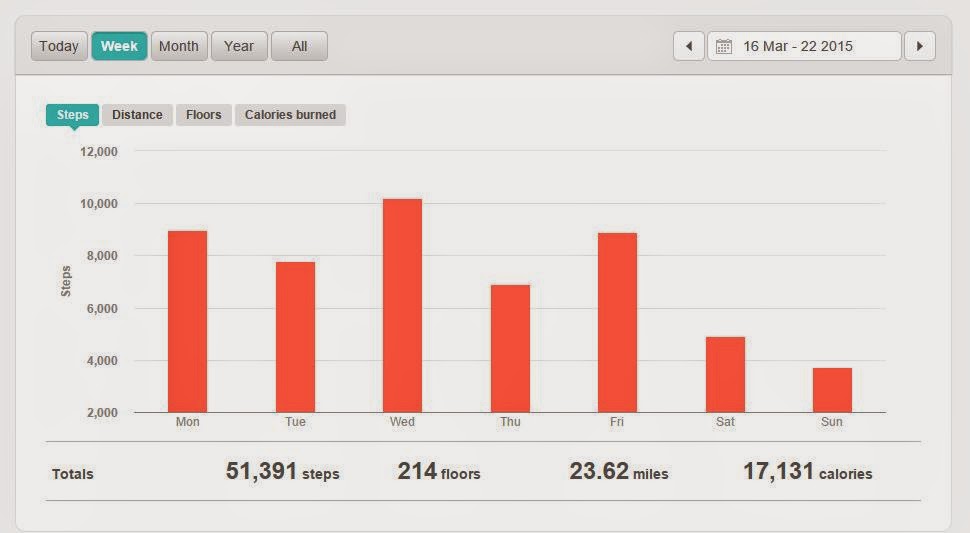 Another positive is that I'm starting to eat earlier in the evening. The goal is to change when I eat rather than what I eat as I never truly over-indulge but I have a problem hour when I come home from work hungry, I'll snack and then be full but force a meal down between 8-9:30 so instead, when I return home, I eat. A simple change, I still have a little time for pudding as I aim to eat my last morsel by 7pm. I'll keep up with this, I've already noticed a difference with hunger, I never used to truly feel hungry at breakfast, delaying it until around 10am, Although I'll carry on with having a late breakfast I am at least hungry for it now.

One final positive is that I managed to do some exercise this week on top of the yoga I did a bit of moderate intensity exercise just using the wii, I also added holding light weights to my step routine, I'm really wanting to get get back to using The Firm exercise DVDs as I haven't had a dud one, they've all been fun, energetic and powerful.

Now the one thing I really wanted to do just didn't happen, I didn't get more sleep, so that is yet another goal for this week.