Another week of being topsy turvy so in similar fashion I'll start with the positives.

I'm certainly on top of eating early, well, mainly in the week, my weekend was all over the shop but that's a different story, not a terrible one just different. I've found that when I eat earlier in the evening I have smaller portions and I don't end up feeling stuffed. I also actually feel hungry at breakfast time, another positive change. Being hectic at work has meant stuffing food down my neck which hasn't been good. Once the new financial year starts I'm hoping things calm down and I can eat slower, digest and have a better variety at breakfast.

My exercise has been lacking, I've done steps basic and steps plus on the Wii but that's about it. I've been having a lot of pain where I had my surgery, I don't know if I've pulled something or twisted funny where my surgical drain was, this has the greatest amount of scar tissue, it really felt like a huge hole but it must have only been like a hose pipe. I've felt a bit bloated and this might be a bit too much information but I've realised I haven't had a period since my grandmas funeral in January. Add to that the lump in my back is irritating and aching, plus being exhausted, I just haven't done much and I haven't got my steps up to scratch.

Although I realise that the best thing is to stop whining and try my hardest this week. With any nerve pain I've had the best thing has been to do a little more. I know this week might not be completely successful but I'm planning a complete battery recharge this weekend and, depending on the weather (although right now it isn't looking possible), a little bit of walking. I had planned to go on a walk last Saturday but as it was absolutely chucking it down it wasn't possible. I'd jinxed myself this week by considering a walk on Saturday, I'd realised it hadn't rained for a while and therefore would be suitable for walking, of course now the rain has come down so hard the ground won't be suitable for weeks but as long as it isn't raining I can at least head into town. 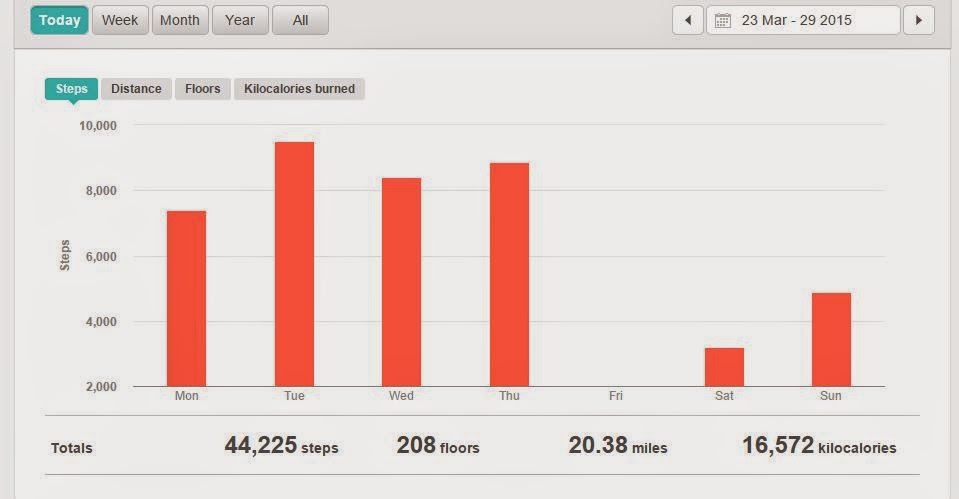 My steps were down this week I had got a plan together that just didn't happen, I took Friday off work so I could get on with clearing things around the house for dads eventual return/home visits. It was mentioned last thing on Thursday that there would be some painting done Friday morning so it got in the way slightly but I thought I could stay out of the way and get on Friday afternoon but unfortunately the work went on all day. I did a tiny bit in the evening but had to do the rest Saturday when I was supposed to go for a walk to get my steps up, but it was raining anyway. It was still chucking it down Sunday so I ended up just walking the one way to the Vintage Fair - in a nonsense way this was when I returned home with all the shopping, this also meant it was uphill so I suppose that is a good thing, at least I had a new umbrella to use!

I still haven't got on top of my sleeping, I will really try this week, I have a four day weekend so I'm hoping I can have 8 hours sleep at least two of those nights.