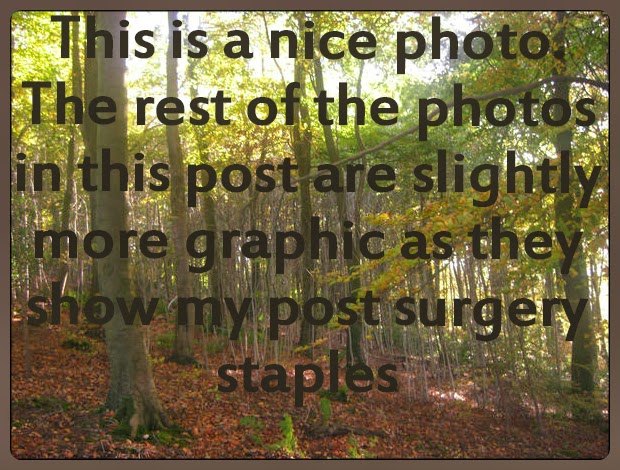 Well I only checked in five days ago but I'm not brilliant at sticking to routine plus I have a very busy week ahead and weighing myself on the scales will be a couple of minutes I'll be looking to save.

No surprise that not much has changed in those five days, I've stayed the same, I didn't expect a loss so I'm not disappointed. I'm still pleased that I've lost half a stone since summer without really doing that much just being a little more active. I think losing a lb here and there just doesn't feel like much but when you look back to what it has amounted to, well it does feel amazing.

Recently I've been thinking about New Years resolutions - I don't usually believe in doing that sort of thing, if you want to change something then start straight away however this year the sort of changes I'm making either take time or are impossible to start until in the new year at this point I'll change the subject to the surgery.

I started back at work 7 weeks ago after quite a while off, I didn't go back fully better, I'd had surgery in June and I'm still recovering. Work was and still is a shock to the system, I'm back to full time but I'm still taking it easy where I can and luckily work are very supportive. The weekends are mainly for resting as I'm slightly in pain all the time, a little more so than when I first went back to work. I've also managed to have every bug going but I am hopeful that it will start to get better and I will be able to start with the exercise again in the New Year, although I'm sure that will come around in no time.


The photos above were taken about a week after surgery slightly bloated, unfortunately I took a joint photo of my drain and one of the larger incisions but it isn't that clear to see in the photo so there is a couple of very blurry images. At this point I was still stuck in bed needing 24 hour care but was determined to take photos before the staples came out, a bit gross but I wanted photographic evidence of the staples being in! I hadn't even considered being stapled back together so when I came around in hospital I was a bit shocked, well, not straight after I came round but many hours later, I was scared of knocking them. Fortunately I didn't knock any of them but I did knock the drain out of my wrist, now that was painful. The surgical drain is actually quite sore still, it was in for 5 days rather than 2. I was in hospital 6 days rather than 2 also.


I was also a bit shocked by how big I was, I think I had to ask James if I was usually that big. I was full of gas from the surgery so it was nice to see myself decreasing in size rapidly over the next 10 days although the gas pain is horrible.

There are many positives to this, although I'm still in a bit of pain it is nothing like the constant aching pain I was experiencing before the surgery. It can be depressing waiting, the weeks roll by and I only feel like I'm progressing a little bit but James will always remind me how bad I was straight after surgery and it is true that although I'm not 100% but I'm making good progress. I'd say I'm over half way there.

So although weight loss is important so is feeling completely better. I would trade my 7lbs to feel 100% right now and be able to get back to being able to exercise. Just feeling tired on top of being in pain, everything seems to take much longer and I'd like to be back to juggling multiple tasks. Now I'm back to working 5 days I can't see myself even getting out to walk at the weekend although this weekend I did walk up the road a couple of times, not much but something, plus work keeps me on my toes so even though I'm not seeing myself as being that active I'm sure I'm doing a lot more than I was 4 weeks back. It's the same with weight loss too, sometimes you don't see the small changes but everyone else does and you just have to hang on in there and be positive, progress is progress.