Please Welcome a New Member to Our Family....Samhain

Just a few short weeks ago we sadly lost our beloved cat The Beast. Now The Beast had only been with us for 6 months so it was heartbreaking BUT he wasn't 6 months old he was 18 and ill, this doesn't make me miss him less but he did have a life before me. Now a lot of people asked me if I was going to get another cat, although a few asked if I was going to get a replacement - I pointed out to those that you can't get a replacement for a cat which is an individual, living being not a TV, although not in such an grumpy way as it sounds typed out. The main answer was I just couldn't think about it right now. Then something happened.

I was randomly looking at black cats from the area where The Beast was originally from. On one of the rescue sites from his area there was a note mentioning how much of a struggle it was to re-home black cats which I found amazing, although The Beast was my first black cat I've known many over the years - scarily running across the road for a bit of affection, I've not known any nicer cats, I don't even know why that is. So before I know it I was looking up our local RSPCA, there were a few number of black cats and again it mentioned how they struggled to be adopted - I'm absolutely shocked by this. There was one particular cat called Sam that I saw and I thought I could be what he needs.

Anyway that was Thursday 17th July, on Friday I mentioned it to my mum (James had already been debriefed) to see how she felt about it, until The Beast moved himself in she had been wary of going through the heartache and worry again. Whereas I, even though I was so broken when The Beast passed away and Tabby several years ago, I also feel bad not helping when I could. Luckily my mum was rather positive about the prospect of adopting another cat. Friday evening I'd decided I wanted to phone to see what to do next and if Sam was still up for adoption, I'd decided Sam was the one for us. I decided to wait until Saturday morning to phone, I could barely sleep Friday night waiting to call so by 8:30 I was on the phone leaving a message and by 10:30 I had a call back, by 12 I'd submitted the adoption forms and at 5:30 I got to see him person, as lovely as I'd imagined and hoped. The whole process went so quickly, I let them know that I was definitely interested and after that a few more checks were needed including phoning my vet and a house visit which all happened on Monday. We picked him up Wednesday evening, I couldn't believe how fast it went and here he is.

Sam, now renamed Samhain (pronouncing it Sowin) - the new name was just tested at first to see if he would respond to this and as he did immediately we decided to stick with it. He is around 9/10 years old, in good health apart from a few broken teeth. He is remarkably affectionate and very playful. I'd be foolish to say he is completely settled as these things take time, he was with the RSPCA for 3 months so I'm not sure if he knows that where he is now is permanent. Add to that he needs to be kept in for the first month, then, the panic, small steps when we go out to get him used to the area - he is so curious I'll really have to watch him. There's a lot of worry but it's worth it. 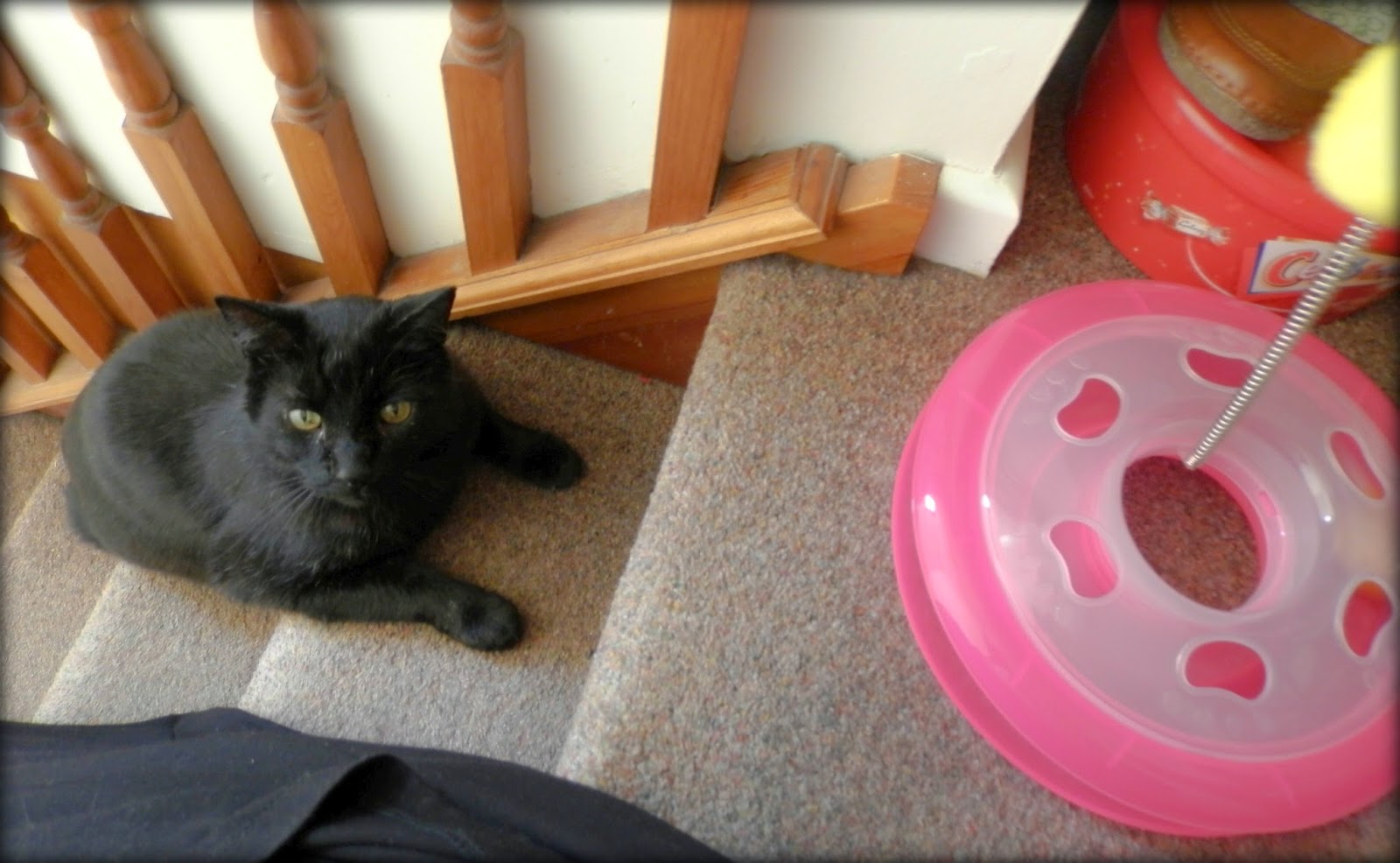 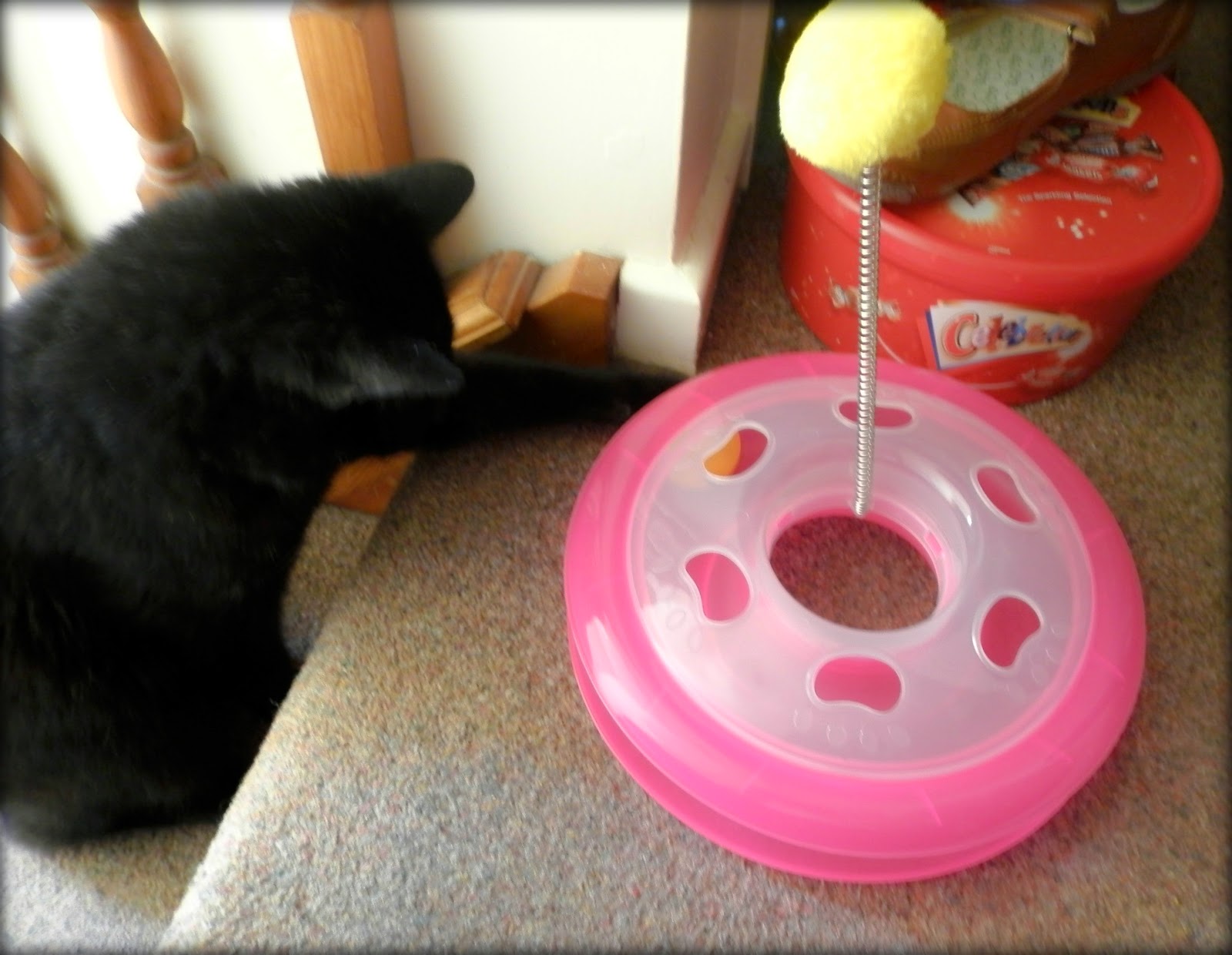 Back to how he settled. On the night we brought him home we set up the little front room for him, this was the best room for him sadly this was the room The Beast died in, strangely it did fit the new beginning too. It's a nice cool quiet room that would suit him while settling in so his litter tray and bowls were left in there, although we would leave the door ajar. Well that was the plan, we were following the rules, as soon as we opened the door on the cat carrier all he wanted to do was explore the house, he's such a bold brave boy and this he did and over these few days he has continued to do.

He's getting settled using the litter box, slowly getting used to new noises, still loving to explore. He is eating well and sleeping well - he runs and licks his mouth in his sleep sometimes, well when he is really deeply asleep. He isn't shy, when he wants attention he lets you know. Plus he loves toys, I've really gone to town as he is really playful, so far his favourites are his Kong Kickeroo and his Yeowww Pollock cat nip toy. This is still the early stages, even though he has settled well I'm anxious about the day we first get to let him out, I'll be there with him but boy can he move.