Monday 30th June
What a funny day, just before lunch I was feeling full of energy and planning to do a touch of yoga tonight but my energy really started to fade fast and I could barely keep my eyes open by 3pm so tonight has remained my rest day. My steps have hit over 10,000 but only by a few hundred but that will do as my day hasn't been overly calorie laden. Looking forward to a bit of gelato tonight after some gorgeous aubergine bake and vegetarian schnitzel. I managed to make it to bed before 7! Although not eaten just yet, I plan to be asleep by 10.30pm, no later. Hopefully I''ll be full of energy tomorrow.


Tuesday 1st July
Another strange day, food wise I was fine, I also met my steps and then some. The one thing odd was that I felt incredibly tired, completely exhausted, I could barely keep my eyes open all day. When I returned home I found that I'd won a prize, Chrysler had a competition running on a few magazine competition sites that I enter, and I won! The prize happens to be £500 worth of ASOS vouchers! I couldn't believe it - that gave me a little perk and I found myself pacing back and forth until James came home to tell him! Now this voucher has given me another goal, it lasts until July 2015 so I've decided to save this to go towards buying a few excellent (expensive) pieces when I reach my target. It gave me some determination and I managed to make it through a work-out although I felt weaker and wasn't able to perform as well as I usually do :(


Wednesday 2nd July
Hooray! I'm ill! Okay, the hooray isn't really for being ill, it's just a relief that my lack of usual energy and performance with my work-out last night wasn't because I was losing my mojo! Being ill does suck, I went into work, but felt so lousy I was home just after 11, because of the walk to the bus, back, and being back and forth earlier I managed to meet my steps. When I got home I had my dinner, I couldn't face my usual so instead had soup and toast (which is actually more calorific), I did then have a bit of chocolate (my Easter chocolate - I still have Easter chocolate left, that is an achievement in itself) I just felt like eating as I was so exhausted, I ended up just going to sleep shortly afterwards for a few hours, when I did wake up I decided to try and do a clear out that I'd planned even before the £500 voucher win, inspired by my decision to treat myself to some Sweaty Betty work out gear. Anyway I decided to get up and do stuff because I wanted to make sure I sleep well tonight so hopefully will feel better for work tomorrow.


Thursday 3rd July
I'm off work, I felt so lousy when I woke up, I found it incredibly hard to drag myself out of bed, my throat is swollen and my nose is sore. I'm finding it laborious to breathe so for now I rest - apart from having to get up for hot drinks and to sort out The Beast - that will certainly get some steps up. Ended the day under 10,000 but only by a couple of thousand which isn't bad for being at home sick. Plus I didn't eat an awful lot although the tea included potato wedges as we're trying to use up items in the freezer so it can be defrosted - we always are, never succeed!


Friday 4th July
I went back into work today as I was feeling slightly better in the morning plus there were a few things I needed to get on with. I'm glad I went in to get things done but my cough flared up again and the red rash from my runny nose became worse so I ended up doing what I needed to and going home at lunchtime. I had hoped to do some yoga when I got home to help with breathing, I've had a mix of a cold exacerbated by hayfever which sucks PLUS add to the mix monthly female hysteria, anyway, by the time I'd gone to Boots for supplies (Plus a Soap & Glory treat and new moisturiser) then dragged myself up the hill home I started to feel incredibly exhausted again so instead, once The Beast had been tended to, I tucked myself in bed and promptly fell asleep until there was a knock on the door. Food wise again was a little funny, but under on calories, felt slightly nauseous at first but better at night.


Saturday 5th July
Still snotty but not feeling as tired, cough is a little better too but my workout has been scuppered yet again in an even worse way, I say even worse as I'm unable to get my steps up either, I've been lying funny as my left hand side, thigh and hip are sore possibly down to the amount of sleeping I've been doing as I've done a lot of sleeping this week, mainly on the one side. I did start to try and workout, I was desperate to get my Sweaty Betty gear on - to see my haul go here. I decided to do some stretching pilates to open up my hip and it did feel a little better so I went on to my HIIT style dvd, it gradually got worse becoming more noticeable during jumping squats with weights. I had to give it up but concentrated on some free weights after but sitting down to avoid putting weight in my lower half so I still managed to burn some calories. Food wise I've been a bit slack, not full of loads of healthy goodies just bits here and there plus my protein shake after the weights (as well as normal food) not over on calories but I am on fat today, not by much, I'm mainly not happy with the quality of food rather than quantity but this is a small blip and I'll be back to normal next week. Even though I can't walk about much I do hope to at least get to 5,000 steps by the end of the day. Tomorrow I plan to do yogalates as this is more stretch rather than jumping so hopefully it will help my hip/thigh, then back to rest on Monday, hopefully by next Tuesday I'll be back and running again - literally.


Sunday 6th July
I woke up feeling stiff still but after my usual painkillers and a bit of moving around it feels a bit looser and less sore. Still, I decided to concentrate on yogalates rather than steps. We woke up later than usual, 10am, so we had a late breakfast at 11 then, rather than squeezing in a lunch we skipped straight to tea, slightly earlier than usual so I won't be over on calories. Feeling quite a bit better cold wise but still have a scabby top lip! Don't feel as exhausted as I did so hopefully I'll be back to normal by tomorrow. Yogalates went well, I think a mixture of losing a little bit of weight and becoming more flexible means I've been able to go deeper into my poses! 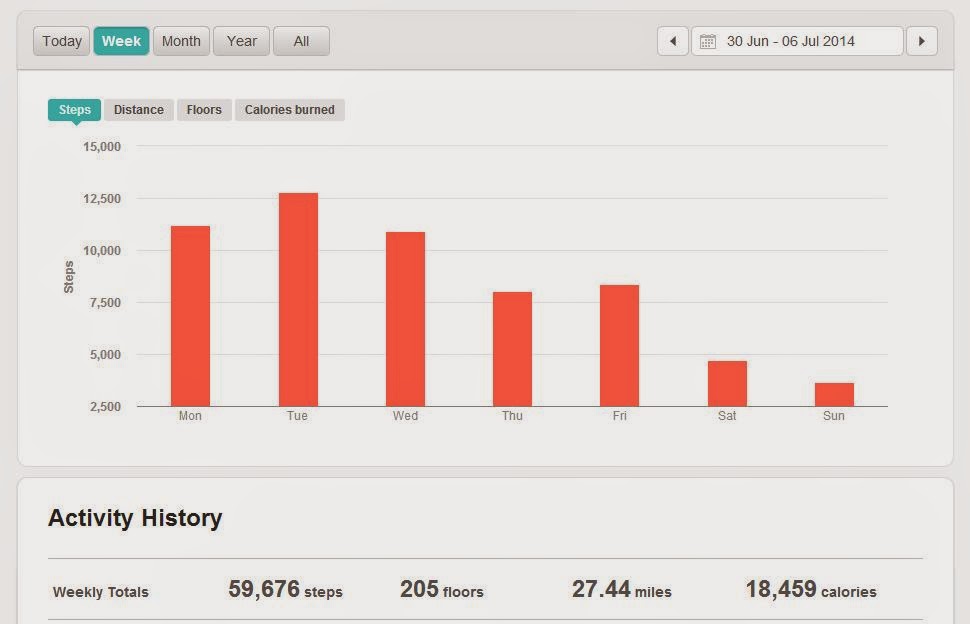 Short Term Goals
I want to bring last weeks goal, that I didn't manage to make, forward and aim for 37 miles this week but that's the only goal for the week, oh and get back into my normal routine - hopefully my hip will feel fully back to normal by Tuesday.


Long Term Goals
To get to my goal size so that I can buy some gorgeous new clothes with my £500 ASOS voucher!
Posted by Unknown at 20:18