I have never ever been to Leek, Staffordshire. I live fairly close yet I have never considered going to Leek shopping. I've heard good things about it before but without a car it hasn't been somewhere I've managed to get out to. A good friend of mine was talking about it the other day and was saying how great it was for shopping. The very same friend who is visiting from Wales at the moment offered to take me out today, just as a chance to take me out for a run, get me out of the house which is something I rarely do at the moment as I'm not able to. I'm wary of going out at the moment as it's really painful, at the same time I need to get out at least once a month as it's of benefit for my mental if not my physical health. We were going to go to see donkeys but what with the weather being terrible I suggested a bit of shopping and was really happy when he said we could go to Leek! With my handbag at the ready, a bottle of water, pain medication, Bob to drive us and James to help me get around I was raring to go, just in a slow unsteady way!

Leek is really a beautiful town and the shopping is fantastic especially if you love a bargain and I'm pretty sure we all do. I haven't got any income at the moment so my funds were limited but I gave myself £25 and James also bought me some items. We bought loads of goodies at great prices. Now I could just describe them but nothing beats photographs, even of my bargain food buys!

Now this won't be in chronological order, I'll start with my favourite bits from today and then go in to the numerous bargains towards the end.

Old Cat postcards, I mean who doesn't love cats? I know there are some fervent dog owners out there that swear cats are the devil but I just see them as cute bundles of independent fluff. Dogs are cute too. Anyway I was drawn to these postcards by the haunted look of the cat on the right, the postcards were 2 for £1, another bargain, so I flicked until I came across some slightly naughty looking kittens. If I would have had the strength I would have gone through the whole lot but I was struggling at this point. 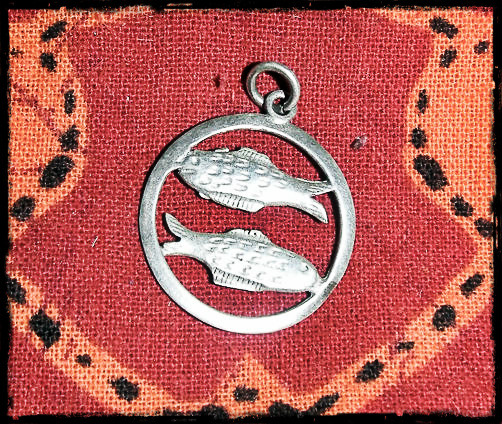 This in some ways is my buy of the day. It wasn't a bargain if you compare it some of the items bought today but at £4 for this old, odd, Pisces pendant I love it. 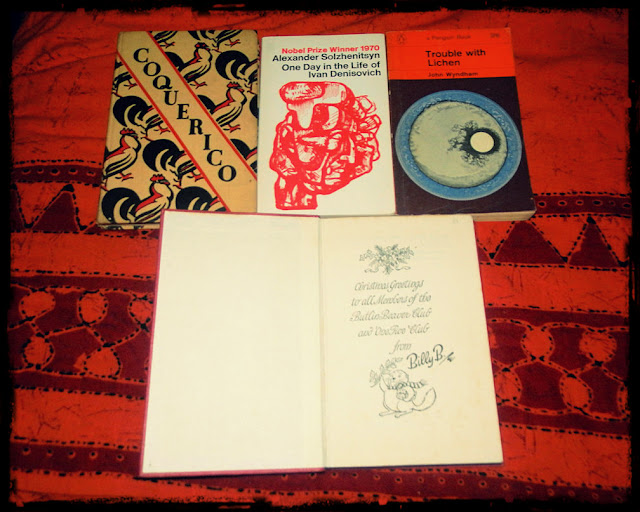 I'm an avid reader, I'm even more of an avid collector of books. These were 50p each. From left to right top row: Coquerico - A book in French for children, possibly just about what I can manage reading in French, I mainly love the cover and the illustrations/One Day in the Life of Ivan Denisovich by Aleksandr Solzhenitsyn - a story set in a Soviet labour camp in the 50's, this one is more for James although I'm sure I'll read it at some point. Trouble with Lichen by John Wyndham - This is about a biochemist that discovers a chemical that can slow down the ageing process leading to people living for hundreds of years, looking at the repercussions of this in society. I'm a huge John Wyndham fan but I haven't read this book and although I may have another copy I'm pretty positive I don't have this cover. Finally the book at the bottom I opened to the front page as there isn't a cover, this page is a Christmas Greetings to members of the Butlins Beaver Club the book in question is Holiday Camp Mystery by Margaret Cole.

Kitchen jars! For the last few years I have been collecting items for my dream kitchen. My dream kitchen happens to be something most people would consider a nightmare. A 70's style orange and brown kitchen. So I pick up pieces in charity shops, car boot sales and second hand stores. I buy a lot of Hornsea, mainly because it fits the bill but I was really happy to find these jars. Okay, one of the lids is missing but I do hate honey. They were 50p each, 25p for the one without a lid, they were a bargain at that price. 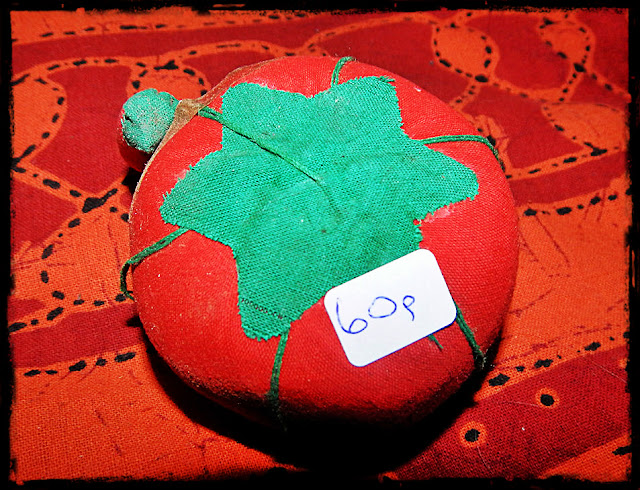 A pin cushion, a new pin cushion from a sewing store in The Buttermarket. 60p, I've left the label on for a effect, it was only 60p! The first thing James said was that he wouldn't be having nightmares about me losing needles in the bed again, as mentioned in the Cross stitch blog article.

Now let's move on to the stuff I bought outside the buttermarket. A mixture of Home Bargains and B&M Bargains both fabulous store for really cheap brand products.

A mixture of the cosmetics & toiletries stuff I bought. I am still on track with the 6 month ban on buying things like that but any essentials or a good bargain I will pick up. Everything today was a bargain, I can't get over how great the shopping is in Leek. I really don't need the eyeshadow but I always need nudes and I did resist getting one of the Urban Decay naked palettes earlier this year so £1.99 is small change in comparison.  Again, I don't need the foundation as nobody really needs make-up it's just whether you want to wear it or not and at the moment I need help with my complexion. I haven't tried Maybelline foundation but at £1.99 I figure it's worth a try. The Neutrogena wave? I just like gadgets, end of. 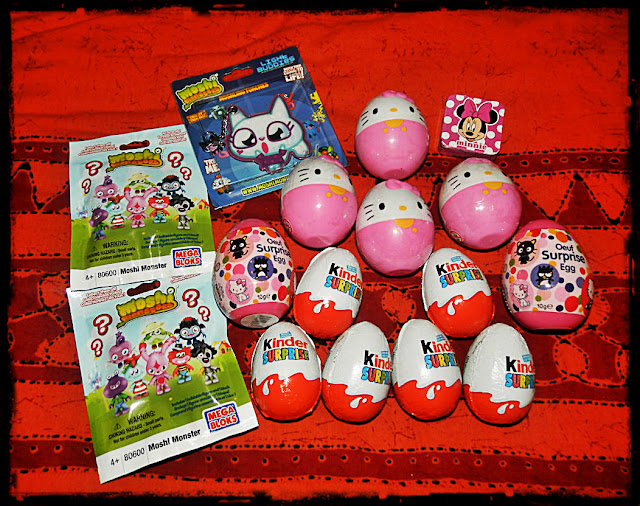 Now the above picture is a mixture of childish goodies, ranging from 49p-99p in price. Embarrassing to admit but apart from one of the Hello Kitty eggs and the Minnie flannel, everything here is for me. The Moshi Monster Keyring torch, the Moshi Monster surprise Mega Bloks (I just love surprises). I'm a Hello Kitty fan, a bit mad for my age but I won't change. I love surprise eggs and well I got plenty of them, including plenty of Kinder Surprise!

I'll finish this off by posting a photo of what was in the pink and white Hello Kitty eggs. 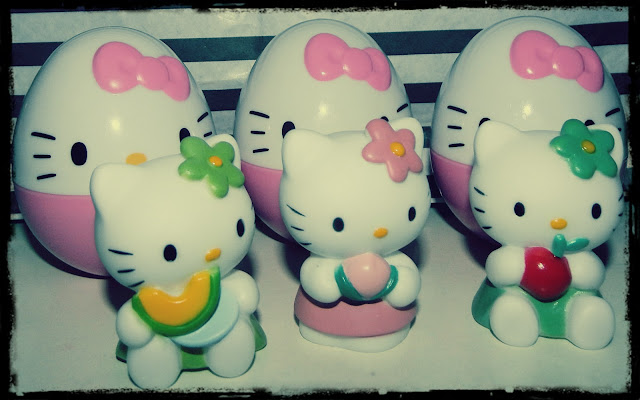