For someone stuck at home for the foreseeable future I'm rather excited thinking about my next holiday. My next holiday will also be my first proper holiday since 2007, it also won't occur until at least 2014 not just because of money but because of the operation, I'll be resting up for 6 weeks post-op which isn't long but I will also want to get back to work AND I don't feel safe travelling until I know my insides have settled down. I think part of me is scared as I started to feel bad again last year whilst I was on a short trip to see my friend in Scotland. It didn't cause it but I do associate the travel with feeling awful, but I'm planning ahead and thinking about the future. There is one reason and one reason only why I'm thinking about my future holiday and that is because I won a voucher for SwimHut so I now have a swimming costume ready!

Now I haven't worn a bikini since I was around 11 years old. My confidence was a bit all over the shop back then, it still is slightly and the last thing I wanted was to parade around in as little clothes as possible. I think after years of being encouraged to wear only the bottoms so that I would get more of an all over plan (roll eyes here) I covered up as much as possible, especially when puberty hit. 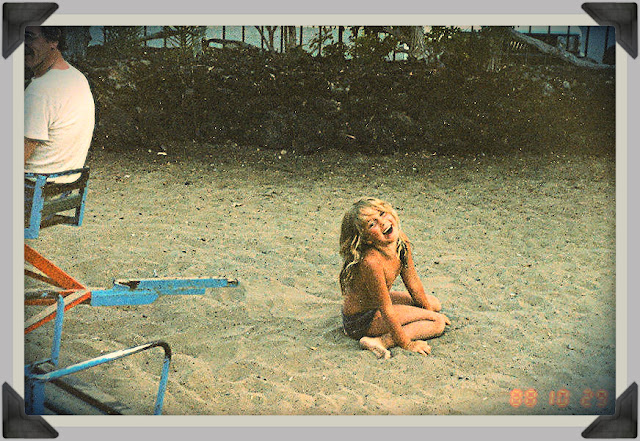 This is the only photo of me looking happy in a bikini, I'm 6. This photo overshadows the fact that I dropped money down a drain and some child threatened to shoot me.

Still being uncomfortable in my body isn't actually the main reason I don't do bikinis, it's because I like to swim. I've been swimming since I was tiny, I used to go three to five times a week, sometimes for four hours at a time. My local pool was never busy enough to bother flashing the coloured lights to get you out of the pool. The ones that correspond with the rubber bands they give you when you hand in those unwieldy clothes hangars with all your belongings, of course swimming pools have been modernised but I like to imagine them how they used to be, plus nowadays I spend my time worrying that my key will fall off the rubber band and end up in the bottom of the pool, it takes all the relaxation out of competitive swimming, the people I'm competing with don't realise its a race though.

I also can't sit still, 30 minutes top, I can't just relax and lie still without falling asleep, nor am I after a tan. I love to read but after a while I just want to cool down and either get in the pool or the ocean. If I was wearing a bikini I would be constantly worrying about my top rolling down to my belly mid stroke, to me bikini's feel flimsy - I need more material. So this is why I'll never be comfortable in a bikini but nor do I want to be. There are so many gorgeous swimming costumes around, I love retro styles and with my voucher I decided to go wild and spend all of the voucher on one swimming costume. I have plenty of sensible swimming costumes, this is both practical and pretty. 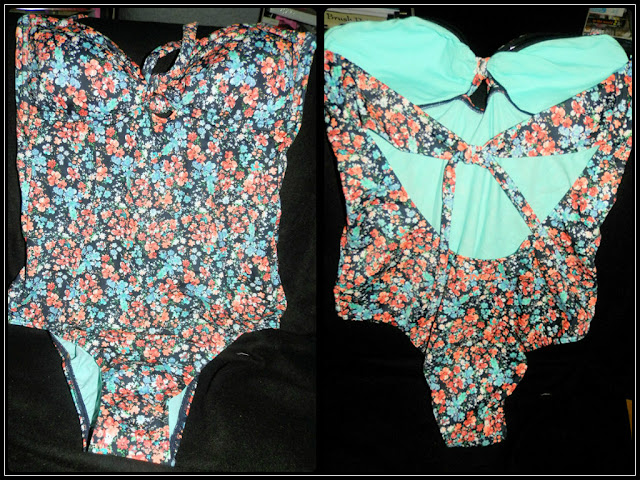 I went for an O'Neill Swimsuit. It looks attractive but is still fairly practical, the top ties around my neck so slightly risqué but nothing that a double knot won't fix. Now I just have to wait patiently to try it out.
Posted by Unknown at 09:30