Do White Nails Ever Look More Than Just a Tippex Frenzy?

Okay so white nails are in right now and in all the magazines, where I've seen copious amounts of pretty ladies with pristine pretty white nails looking fantastic. I thought it looked great and simple but I'm starting to think the simpler the nails look the harder it is to get them completely right. I've been wanting to try it out for a while, try it out? yes, I know painting my nails is hardly trying something out but lack of energy, being stuck in bed and the overwhelming heat have left me feeling very lazy but preparing for another weekend indoors, in bed, I decided to go for it. 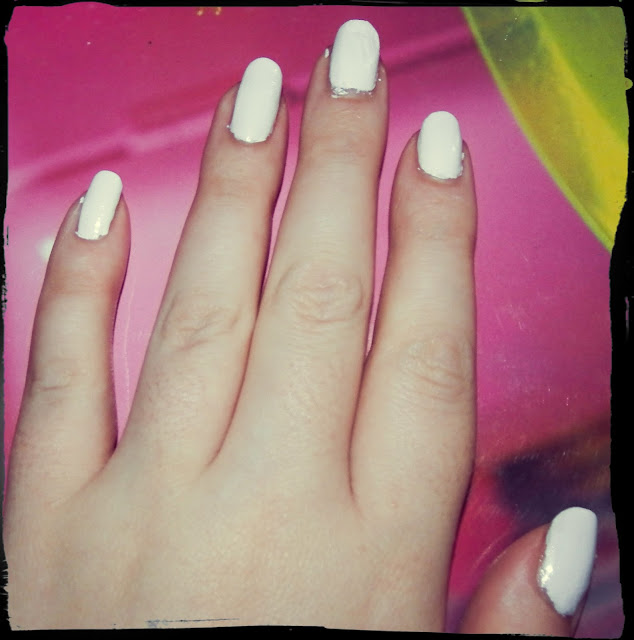 It looks terrible I know, I don't know whether it was down to the nail varnish, I used the Rimmel Brit Manicure White tip which really is just for the tip and is great for that, see here. I applied two coats which went on evenly but after lying still for 50 minutes the result was bubbly, patchy and somewhat scratchy. Even after 70 minutes the varnish feels tacky and is smudging. Certainly not the look I had in mind. I haven't even bothered to clear the mess from my skin as I plan to remove this straight away, so this photo does fall in the lazy category.

I don't know whether the look isn't for me or whether with a bit of a tan and a better nail varnish I could achieve a better look although I still feel like the patchiness around the edges would still look odd. Maybe this just isn't really a look that is easy to apply at home unless someone else does it for you. White nails now goes on my non-existent hardest colour (well lack of colour) to paint my nails list. Having bought this nail varnish to use to do my tips and to apply under special effect varnishes this won't go to waste.