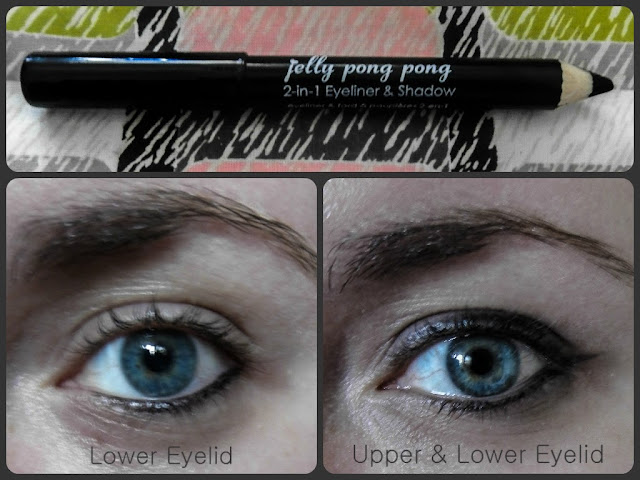 I received this 2-in-1 eyeliner & shadow in the August 2013 High-Flyers Glossybox. I'm always after a good eyeliner, really I like to have a number of good eyeliners to hand by many different brands just because they might end up discontinued. This isn't just pointless paranoia. In my early twenties I was obsessed with having cat-eye/winged liner eyes, I wore it like that nearly everyday but struggled to find an eyeliner that I could apply neatly and that would last. I found the liquid ones a nightmare to use, but about a decade ago I found the perfect eyeliner it was by BeneFit a dry powder that you added water to then used whichever brush suited you best, I was in eyeliner heaven, I could do my eyes perfectly and on top of that it lasted all day. This ended up being discontinued not long after I discovered it, but it was replaced by basically the same thing except the powder was half brown, half black instead of all black, it was called Babe Cake which has also been discontinued. This is why I'm never comfy settling with one eyeliner by one brand. You can guarantee that if you rely on one particular one you'll never see it again yet if you play around and have a few different ones in your make-up bag they'll always be around. I suppose that is the treat them mean keep them keen policy but for make-up. So make sure you play the field. I have yet to find one quite as good as the BeneFit one but I keep looking and trying.

That brings us to my new eyeliner. I'm a bit mixed about the Jelly Pong Pong eyeliner there is something about it that feels a bit cheap, that mich just be the pencil. I really like how easy the application of it is, I could create fine lines, thicker lines & I could do cat-eyes, I was able to blend a bit on my lid to make a slight smoky look making this pencil ideal if you don't want to carry much make-up around but want to update your look for your evening. It works best and lasts longer when using a smudge brush then applying a second coat on top of that. I was particularly impressed with how long it last on my lower lashes and how evenly applied it still looked after an hour and plenty of blinking. The one thing that would make this eyeliner perfect would be if it came with a sharpener on top as you really need to keep this pencil fairly pointy. This eyeliner & shadow comes in four different colours, Black, Steel, Plum and Bronze - I think I will end up picking up the plum version ready for autumn.
Posted by Unknown at 11:45