Having spent nearly a year in the confides of my bedroom I've started to feel as if the walls are closing in on me. The piles of goods are getting to me but there is nowhere to put them neatly so that I can reach. I know the idea of me being tidy would be enough to send friends and family into hysterical laughter but although I'm a collection hoarding, book piling menace, I am obsessed with order, I like things to have a proper place, my 1000+ dvd collection is even in alphabetical order. As we are just staying at my parents temporarily we haven't really made anything our own, nor can we really, but whether I'm stuck in bed for just one more week, one more month or one more year, something needs to be done.

The plan is to turn the bedroom into a blissful, relaxing, comfy room. We'll always use it, we both read in bed and when winter comes most film watching will be in that room also.

So this is how it looks now: 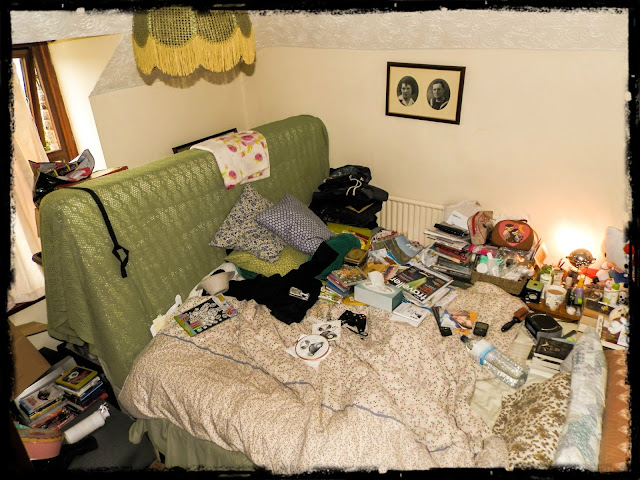 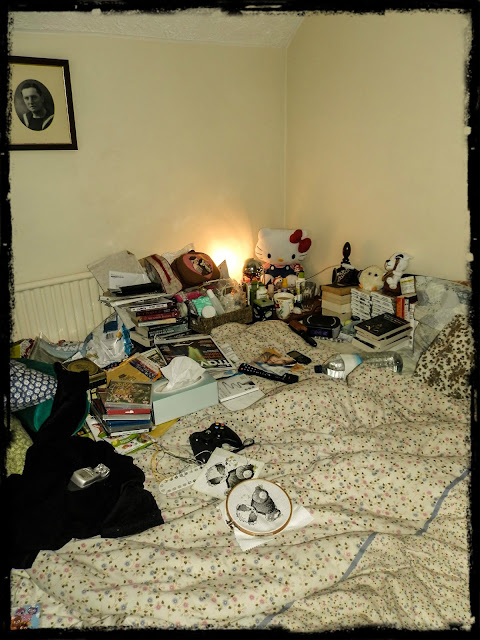 We don't have use of the chest of drawers or the wardrobe, my Mum has her clothes filling these. Nor do we have use of the under bed storage. Most of my clothes are in my old bedroom which we currently use as a living room. I need two wardrobes and two chest of drawers at the moment I have one wardrobe, one collapsed wardrobe, one chest of drawers in use but unable to get in easily, so only clothes I don't wear much sit in there, I have one bedside set of drawers for a few items but everything else is in piles or bags. There isn't much I can do about this just yet but hopefully in a couple of weeks I'll have another chest of drawers. James' clothes are in piles in the  bedroom, he does have one drawer he can use but that is it. There are also boxes of my clothes in the bedroom, four boxes, one trunk and a holdall stuffed full. They fill the room, we can't actually walk around the bed. This room really makes me feel trapped and I'm in there around 20 hours a day, our first plan had to be to sort out all these boxes of clothes.

I've been rather sceptical about vacuum packing clothes and bedding, I could see how it would work on items like pillows but not clothes as much. Fortunately I put that fear aside and ordered a pack of 14 large bags from Andrew James via Amazon, £14.99+£4.99 p&p. When the bags arrived I was impressed by the quality, I felt like I hadn't spent that much on them for the amount we received. They are amazing, I can't get over it, James was hysterical with delight. We only needed to use around 9 bags to fit everything, I also managed to create some space behind the back of the door in the living room, I have a rack of jackets and coats that I rarely wear so decided to pack them too. These photos show a bag full of them, in it there are three coats - one of these is a thick wool type coat, along with seven jackets.


Now it weighs a bit but the amount of room it saves is phenomenal. I had anticipated it would take a while to get all the air out of these bags, some of the reviews stated this but I can only suggest their vacuum cleaners are less than impressive as it takes a matter of seconds to flatten these beauties.

By the end of it we were able to fit six of them in the trunk, one we have hidden in my Mum's spare wardrobe and the other two we can slide behind a bed in the box room. The boxes the clothes were previously in took up so much room, now they're gone and already I feel like I can breathe even though there is a long way to go, most of that will have to wait until the Ikea delivery.

This was our main exertion in sorting out the bedroom this weekend, I say our exertion but I'm unable to do much moving and no lifting, I'm just there to draw out plans (Red pen, Blue pen, Black Pen and a ruler have all been used), I organise it and tell James what he needs to do, of course I have to advise him on which clothes I want to keep and which can go, I wouldn't leave him in charge of which clothes to keep as they would all end up being given away. We vacuum packed just the one jacket of his, he wouldn't even let me pack a smart shirt of his that he had forgotten about.

All in all I think we have made a fantastic start and to top it off, I also finally found what I have been searching for, I think I must have been using the wrong keywords or didn't think it looked big enough but I finally found a TV/Monitor riser that I could also fit my blu-ray player under. This also means my 360 can sit on top of the chest of drawers. It not only looks tidy but it also makes a big difference for me. As they were both sat on the floor I could only use the 360 to stream Lovefilm/Netflix or play whatever game James had left in the drive for me but I can now reach without bending and play whatever I want, watch whatever I want, whenever I want. 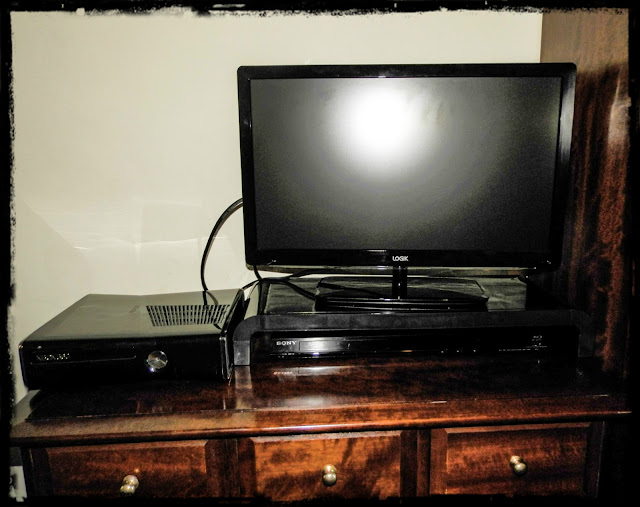 Aside from clearing some space I'm also hoping to improve the look of the room with lighting, bedding and the odd new cushion. The bookcase we have ordered will be a big help as I want to be able to keep books that I plan on reading next in the bedroom and DVD's/Blu-Ray's of that nature too. I also have a number of toiletries I use in the bedroom and would like to keep them on a shelf rather than having everything on my bedside table to knock over when the alarm goes off. It's a while until the Ikea delivery comes, we have to wait until the 27th even though we ordered on the 14th.. I'm really looking forward to getting it all sorted though, I'll turn my bedroom into a sanctuary, a beautifully lit sanctuary just one with a spare mattress stood up at the end of the bed.
Posted by Unknown at 17:12