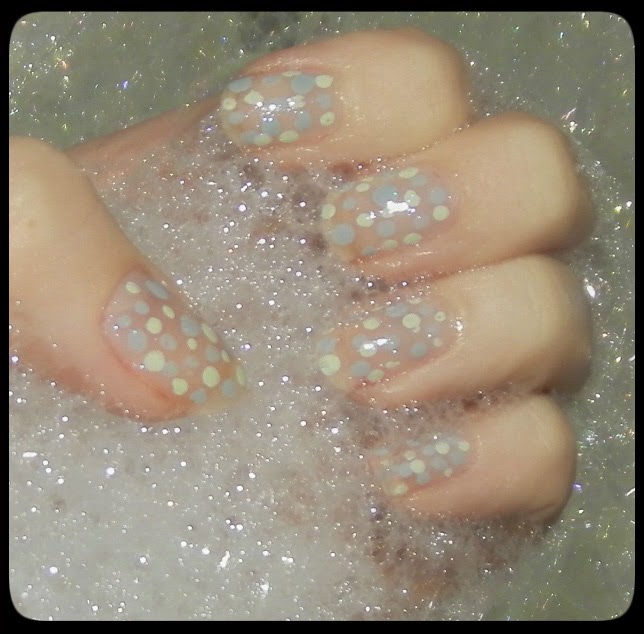 With it being a bank holiday (in the UK) I felt the need for another nail style, this one I call Bubble Bobble. Taking inspiration from the classic Taito game Bubble Bobble's characters Bub and Bob, two little dragons, one green and blue, of course my main thought was also bubbles, oh, simplicity played a large part in this style also.
I decided to make use of the many mini bottles of nail varnish I have lying around. First I went for a clear background that also had a hint of sparkle, OPI's I Juggle....Men was perfect for this adding just the one coat for the base.

Next up I took one of my dotting tools that I really should use more as they are so handy and much more preciser than using the brush in the nail varnish. Plus they are cheap to buy, I bought mine on eBay, but there is a seller on Amazon.co.uk currently selling a set of 5 for 93p with free shipping! For the nail varnish I finally cracked open Ciaté's Doll's House collection choosing to use the green from it, Sweet Pea, the blue, again from Ciaté, was part of a set called Call Me Purple which I picked up at a bargain price from the Baobella Boutique, this is a very light blue despite the name of the set and is understated perfection. For the nail style I used the largest out of my set of dotting tools just to carefully dot nail varnish on my nails. Once dry I added another coat of OPI's I Juggle....Men and that was it, super simple, not too flashy but pretty.