Sunday Weigh-In: The End of the Holiday

Today is a bad day, I mourn the end of my holiday, my week off. It has been a holiday at home but I do wish I had a second week off as this week has flown by.

It has been harder with the diet/exercise this week. If I was on a proper holiday I would have found it easier - plenty of walking, sight-seeing, swimming and fresh fruit (all prepared by someone else) - a lot easier. This week hasn't been a failure though. I've mainly managed to stick under my calories BUT I've usually been over on either fat or carbohydrates so I'm disappointed there.

Food wise I've stuck to my reverse traffic light system however I have snacked a lot. Even thought I've been under calorie wise so many wasted calories have meant by the end of the week I've started to feel icky and my skin looks awful. It just goes to show that just because it fits in with the calories it isn't always right, I always make sure I'm under or on target everywhere else but going off balance has had a big effect. I don't feel like I've gained weight though, I just feel a bit crap. 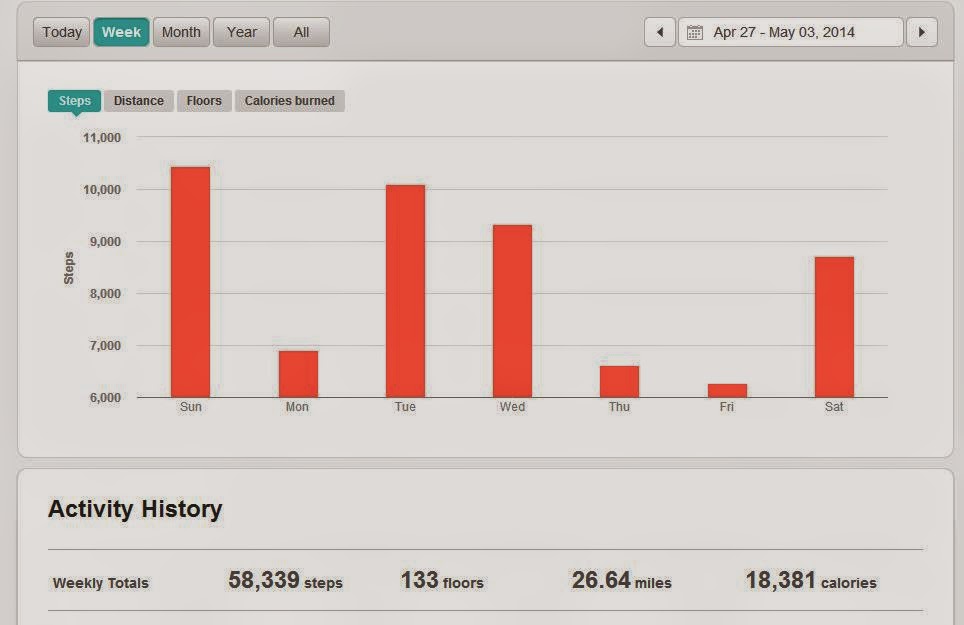 I slackened on my steps in favour of exercise but I did make sure we got out a couple of days, one day we went on a nice short uphill walk on Tuesday and the next day we went to that gardens to feed the ducks and then do a bit of shopping, it all adds up.

The big positive is that I feel more focused on it all, I have a healthy plan for the week ahead an a few new exercise dvds to try out which I will plan to mention once I've worked my way through them. We also finally picked up a badminton set for the garden, we already had a couple of cheap rackets and shuttlecocks but without a net it was hard to stay focused. We now have a £20 set that does the job which is really fun when it is warm out.


Short Term Goals
Get back on track, more healthy food, try and stick to 80/20 ration when it comes to "junk" food, Try out some new routines so I have a nice variety to work through rather than doing the same three workouts. I might try some Yogalates today!


Long Term Goals
The clothes! To be able to feel comfortable in jeans again. Plus I wan to be happy having my photo taken at a distance when on holiday in revealing(ish) clothing.