This might just end up being my shortest weigh in update post yet, which would be a miracle, I'm even going to break down why it will be a short post in two bullet points.

I just about remember things being good, I can't think of a day where I cocked up so things have been progressing slow and steady. 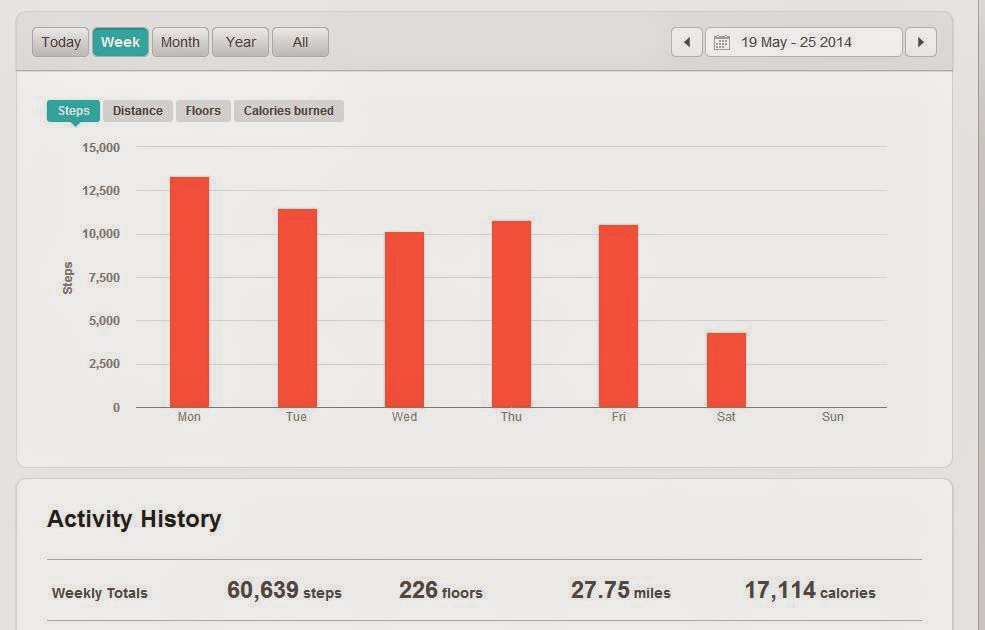 As you can see I had another week of making over 10,000 steps on each week day - I thought I would have a much better week after my impressive start on Monday but it wasn't to be. Please note I haven't finished syncing so Saturday isn't fully there although I did only manage slightly over 5,000 steps BUT if you look at my log below you'll see I burned an impressive amount of calories through exercise on Saturday. 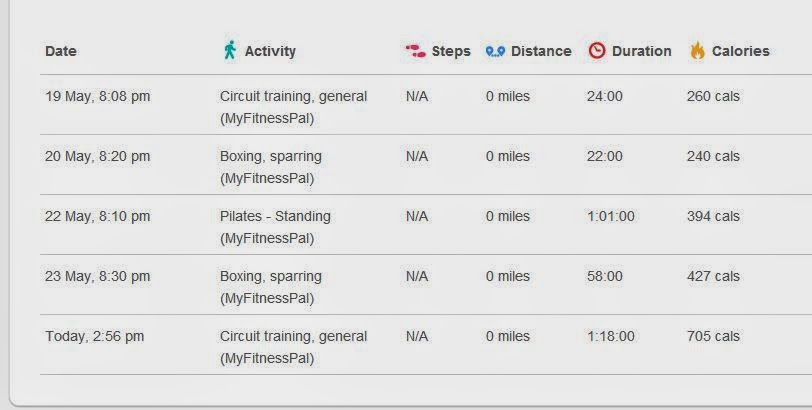 So I've enjoyed my exercise this week, starting boxing, making use of the gorgeous weighted gloves I received at Christmas is great and as you can see from the log above I do burn a nice number of calories over a short period of time.

I've really enjoyed my exercise, I even did a fitness clothes inspired summer wardrobe update post yesterday, see here. I actually already own a few of the items!

I just couldn't get motivated on Saturday though, we had planned to go for a quick walk but the weather was so awful we stayed in. Plus we were sucked in by a dvd, Neighbours from the beginning volume 1- so the first episodes of Neighbours - they were totally engrossing and 10 a.m. quickly passed and it was after 1 p.m. before we could say Jim Robinson!
So what does Sunday hold? It depends on how I feel in the morning but the plan is a quick walk out and a yogalates session, but that's it. It would be nice to do enough walking to meet my goal of 31 miles.

Food wise this week has been the same but I do have some new goals for next week.

*Sunday Morning Update: feeling a bit blah but not as queasy as last night so I'm going to take it in the morning and aim to go out for a walk and do some yogalates in the evening*

Short Term Goals
If I feel as bad as I do now the goal for Sunday will be to get out of bed, if not I want to do more. This week will be funny as I also have the first two days off work so it will be hard to get my steps up, especially if the awful weather continues. Exercise and walking wise I would be happy to continue as I have been this week with a goal to improve even more in June. If I manage to make 31 miles by the end of Sunday then I will aim for 32 miles next week.
Food wise although I've been under I want to improve the quality a bit more, possibly more of a 85/15 ratio with the "healthy"/"unhealthy" foods. I also want to go back to having some plain protein powder after working out mixed with soya milk.

Long Term Goals
They haven't really changed, plus I have nothing to add right now to aim for.