Now this isn't my usual Sunday Weigh-in, not that they're ever that usual just I'm not going to mention much about exercise or what I've eaten as this week has been topsy turvy.

A quick update about that would be I walked as much as I could when there was time and my eating was erratic towards the end of the week but I'll be clearer in a second. I do need to look towards having a better diet, at the moment I'm eating calorie rich food in small doses rather than large doses of lower calorie food.

Well back in September by gran collapsed, my dad actually collapsed two weeks after. She had been medically stable for a while but took a turn for the worst this Thursday. They had found a few obstructions in her colon which were preventing her from passing anything in the normal way, instead she was throwing it up. I went in with my mum and aunt to discuss the options and she has had a procedure just to make her comfortable. We don't know how long she will last, it could be days, weeks or months although I think it will be days considering how out of it she has been since the procedure. I've kind of said my goodbyes although this is only because I'm presuming it won't be much longer and she really isn't aware. It's just heartbreaking but I have to remember she is 87. Update: Mum has just got back and gran was doing better today so I'll be trying to get down to see her again although things can rapidly change so I can't get my hopes up.

Dad is still in neuro-rehab, making small steps but is frustrated and wants to come home, this isn't going to happen any time soon. Also, because of how he is I doubt he will be home to spend time with us at Christmas for fear that he won't return to the centre.

This just means that everything is everywhere at the moment. This will be my last weight post until next year although I promise not to go bonkers over Christmas.

I did manage to go to the Christmas Markets in Manchester, I was determined to go shopping and I did, it was great, although we did a lot of walking (that will be the high score on Friday) and not a lot of eating, I can shop on an empty stomach when I'm shopping! I would have preferred to eat properly but we had so little time. I had lovely snacks at the Market though, half a nutella Pretzel, half a cinnamon crêpe and cherry glühwein - I only had halves as we were loaded with shopping and had to work together to eat! I would usually make sure I at least have a solid breakfast but time was so short. 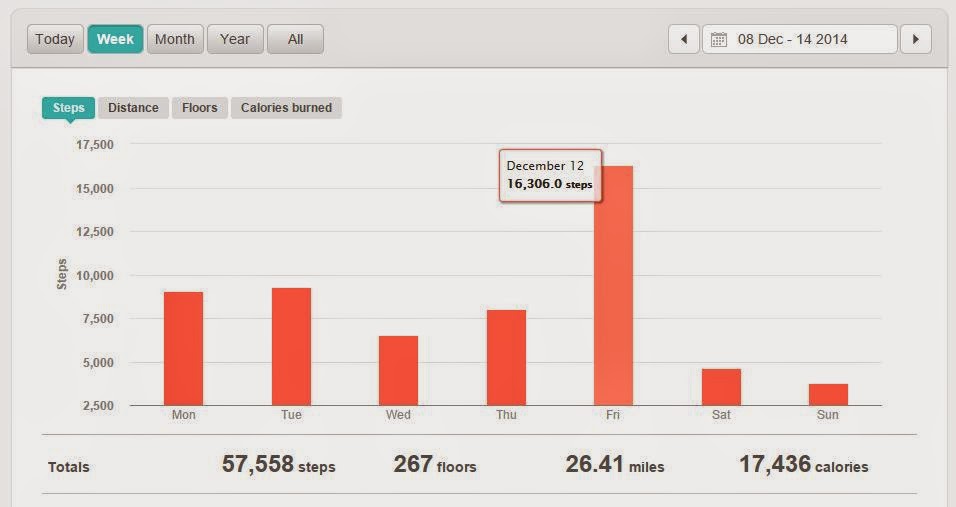 I wanted to update this week as I may or may not have time next week. With everything going on and having so much more on my plate at the moment I'm rushing around trying to get everything done, hence the calorie dense small meals rather than nibbling throughout the day.

Short Term Goals
As I really have no time at the moment I want to concentrate on what I'm eating and improve my diet there. I miss having my salad at work, it was so yummy but healthy, I won't have the time right now but plan to revert to this rather than sandwiches when I return to work in January.