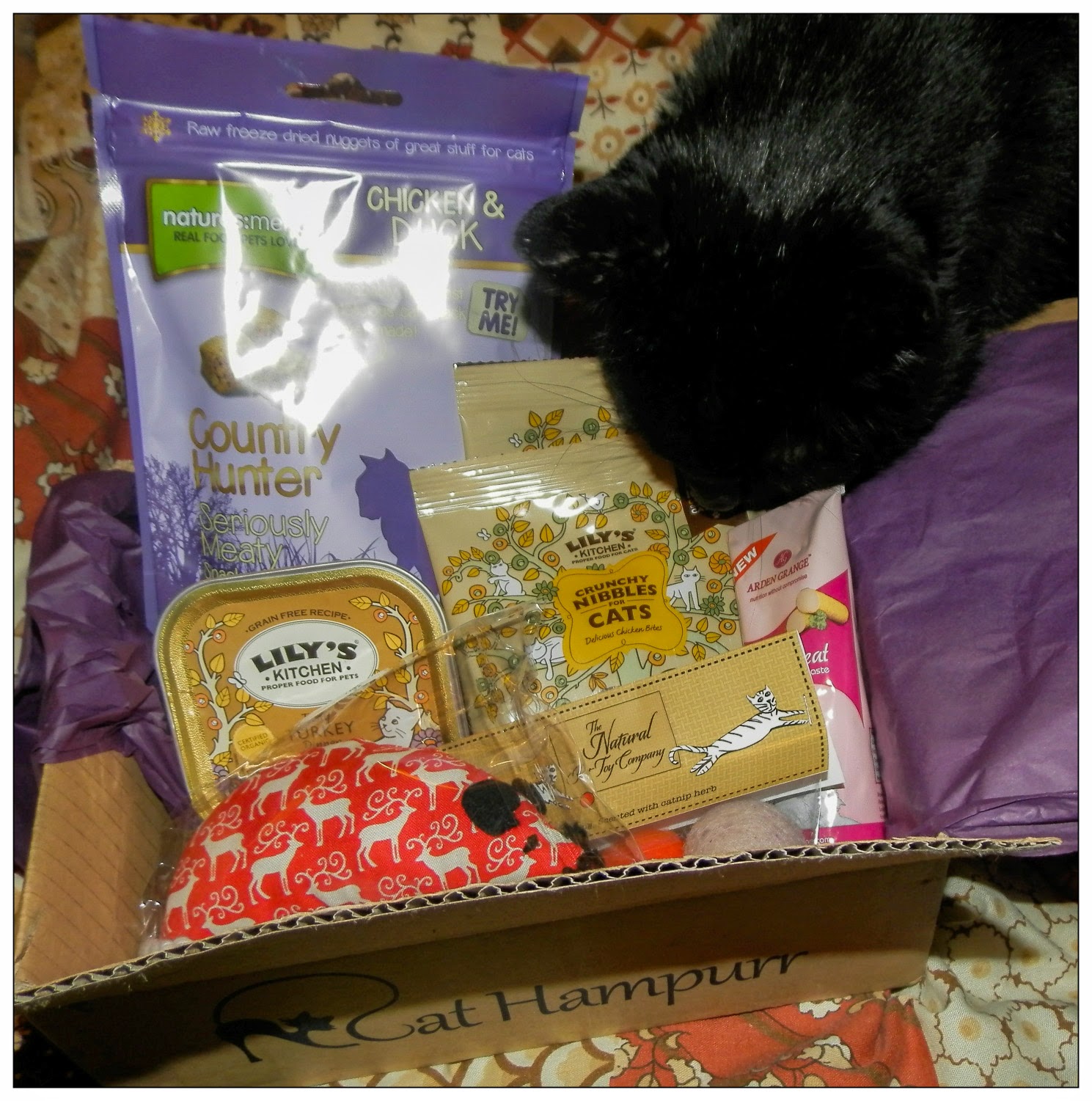 Well I made a huge mistake ordering Samhain's Christmas presents early. For months he has been sniffing around all his presents before going off in a mard - two items I bought are from previous Cat Hampurrs, one from Molly's Mice and a Plague Rat, he just loves them so it's doubly hard to keep him away from them. To make matters worse we're postponing Christmas, or extending it, It can be viewed either way. We're leaving presents until the day after Boxing day so that we can spend more time with them and him (and more time with family on the 25th). On the 27th we will wake up to open the Stockings, drink Bucks Fizz (Samhain won't!) and then open the presents under the tree - he also has a few big toys to play with, followed by Christmas lunch (for me that is so many sprouts and bread sauce that I start to feel ill along with more veg, potatoes and Yorkshire puddings - Fortunately this box comes with something for Samhain) anyway, enough about that and on to the point....

Well, the point is I was glad when the Cat Hampurr arrived so that I had a treat to give my little Samhain before Crimbo. This was especially needed as he was in another fight (same cat, still an ongoing territory war) because we have so much going on he will be kept indoors for a few days to properly recover but this will make him miserable so again, the treats are welcome.

Yet again he was very happy with his selection, even in his melancholy state he got up to have a nosy and a play before he tired himself out - not hard at the moment.

It's a wonderful selection this time, a very special Christmas menu is provided which is so perfect, I'd meant to shop around for something but I was beginning to run out of time, now I don't need to! So what did he get?

Starter: Arden Grange Tasty Liver Treat 75g tube
This is like a pâté for cats, funnily enough I had been thinking about getting something like this, he does love his offal. This is the perfect little starter for him, I can't decide how to serve it on the day. I've already given him a bit and he loved it.


Main Course: Lily's Kitchen Turkey Dinner tray 100g & Chicken Crunchy Nibbles 2x40g
Samhain loves Lily's Kitchen, we were ever so pleased when he started to go for this as he used to be a very fussy eater. The turkey dinner tray is going to be lovely for him on the day, along with the crunchy nibbles which he has had before and loved, I must pick up a proper tube in the New Year.


Dessert: Natures Menu Freeze Dried Treats Chicken & Duck 40g
He does love freeze dried treats but he hasn't had this brands version. They're slightly different to the usual as they're absolutely huge chunks, it was funny watching him try to work out how to eat it, they were too big for his tiny mouth, but he loved the taste so kept licking - I broke it into smaller treats in the end.


Playtime: Krafty Kat Christmas Catnip Mouse toy
I've never had a cat love catnip so much, he loves his little mice but this big mouse is also great, he does love to cling onto his toys and kick the hell out of them, before giving them a good licking, he also likes to rub himself against the toys so at least with the bigger toys he can hold onto them and not knock them off the bed! It also makes a perfect sized pillow.

Playtime: Natural Pet Toy Company felt balls
Another catnip toy for him to love, we have a few standard plastic balls downstairs and he tends to play with these when he is on his own - the usual kick, juggle, run after them etc. He has already started to play in the same way with these - I'm sure he will prefer them as he can actually pick them up rather easily, they're really good quality so I don't need to worry about them falling apart after heavy use. See photo below for a better photo of them as they don't quite show in the top photo.

Another wonderful box for Samhain - I think I enjoy them just as much as he does, I just love to spoil my little boy.
Posted by Unknown at 10:00